"It is natural to use the earth as a canvas. I think of earth as a sculpture in space." -- Lita Albuquerque 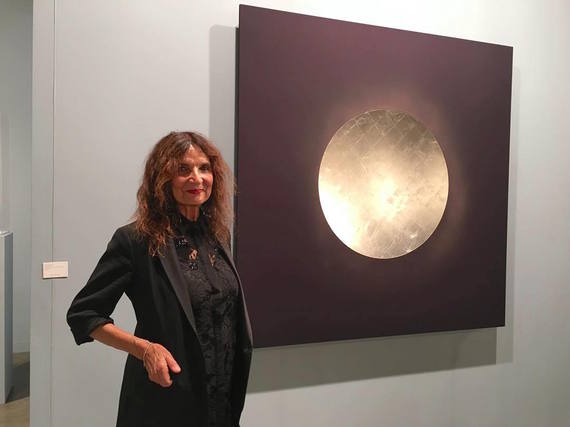 Susan Sontag argues that "whatever goal is set for art, eventually proves restrictive, matched against the widest goals of consciousness." While Sontag famously defined art as a "form of consciousness," she also insists that "outgrown maps of consciousness are redrawn." The expansive form of consciousness in Albuquerque's artworks comes from "always thinking from the perspective of outer space looking back at the earth." This expansive perspective is both futuristic and ancient because astrophysicists, astronauts, poets, philosophers and stargazers always draw from deep space to marvel at the mysteries of life.

Bernard Berenson contends that the consciousness in painting is created by "space composition" which "woos us away from our tight, painfully limited selves, [and] dissolves us into the space presented." For Berenson, the greatest artists are always "space composers." What space could be more expansive than infinite deep outer space -- the perspective from which Albuquerque views life on earth?

Albuquerque explains that the first astronomical images of earth in 1969 revolutionized perspective and underlie her approach to making art that explores the way the Earth is in a solar system, a stellar system, a galactic system and a cosmic system. She expands Berenson's idea of "space composition" in painting by exploring new ways of using light reflection in multi-media works to immerse the viewer in perceptual fields that create a feeling of the ever-expanding deep outer space. This exploration has led her to remote parts of the world to stage large ephemeral land works and to experiment with innovative ways of using natural transformative materials to create a celestial quality in minimalist light and space works. 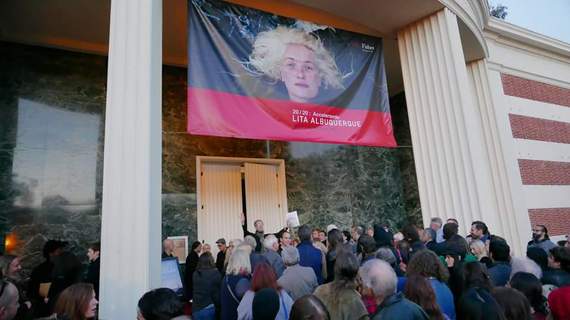 L.A. viewers currently have a rare opportunity to appreciate the depth and breadth of this internationally renowned artist in two simultaneous exhibitions: Embodiment, a solo exhibition of beautiful wall sculptures at Kohn Gallery (January 9 - February 27, 2016) and 20/20 Accelerando, a poetic film with a sculpture installation, at USC Fisher Museum (January 27 - April 10, 2016). This haunting film that Albuquerque wrote after a dream -- with music by Robbie C. Williamson, choreography by her daughter Jasmine Croissant and star language by Cassandra Bickman for the opening performance -- adds an extra dimension which contextualizes the exhibition of objects at Kohn Gallery.

Albuquerque's wall sculptures are initially enjoyed formalistically, for their sheer beauty. But the interplay of squares and symbolic circles -- which are minimalist at heart -- have deeper metaphysical meanings which are understood better in relation to her poetic film. The text for the film came from a dream about a female astronaut from the 25th century "on a mission to spread interstellar consciousness." But when she crash lands on earth on 6,000 B.C., she forgets her mission, forcing her on a heroine's journey "of remembrance and self-discovery." This recalls Platonic ideas about memory, but also reminds us of the Greek myth of Psyche who fell to earth as a dewdrop and had to perform character-building tasks to unite her divine and earthly nature -- with the guidance of Eros -- a tale which Carl Jung and Erich Neumann used to illustrate feminine psychology. Albuquerque says the film came from a desire to introduce the feminine, and symbolizes her own journey to authentically claim "who I am." The film is filled with images of nature which blur past, present and future. At times, the images and music is frightening, and at one point there was music vibrating so much through my body, I thought I was having heart palpitations. When I recounted my experience to Albuquerque, she said, "that is what I want." 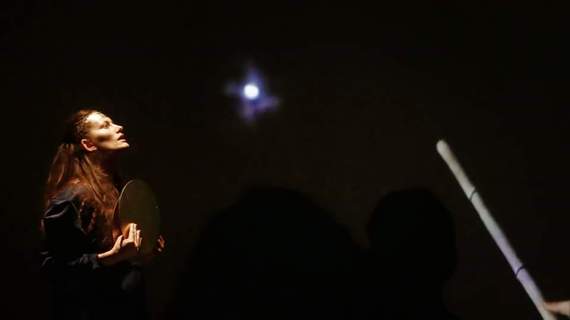 The beautiful abstract wall pieces at Kohn Gallery are also based on interstellar consciousness, but use reflected light to create a more subtle celestial ambience. The glowing resin discs -- resembling gold suns and silver moons -- cast shimmering reflections on the floor and change from concave to convex when viewed from different angles because they reflect light differently at different times of day, symbolizing the space / time / light continuum. But these also create the ambiance of moving through Los Angeles at night or walking around the Griffith Observatory.
These are labor-intensive works, utilizing Albuquerque's expansive skill set. They comprise thirty or forty layers of white or black gesso before the application of further top layers of hand-mixed color. Albuquerque uses natural pigments: like rose madder (from lake roots), soft purple resuvianite (from Mt. Vesuvius) and pigments used in a century old Japanese painting technique, Enogu. The density of the background reflects light -- instead of absorbing light -- like deep outer space, and creates auras around the glowing discs that resemble moving stars in the sky. Michael Kohn (a former Flash Art editor, with a gift for words) explains "the center highly reflects light, creating a beautiful dichotomy that is all within one space. When we think about deep space and about stars, we think about the profundity of its depth and the reflective quality of the stars, which these capture as closely as I've seen." Kohn explains that when we see light effects that are rare occurrences like a rainbow, "we as non-scientists with a long experience of art can ascribe these rare light occurrences to something metaphysical. Then we are moved and think about the human experience -- which is what all great art does." 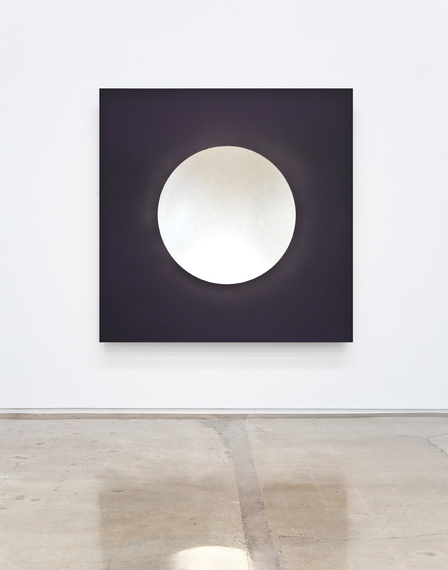 Color and composition can always be appreciated at a purely formalist level, but only contain metaphysical meanings when they make the viewer's body vibrate in response to the art, which itself vibrates. Albuquerque titles this exhibition Embodiment because she understands the importance of what she calls "accelerations that function like perceptual acceleration for the viewer when something gets accelerated in the body, which is a consciousness of perception."

Art is physical, but it is only when the viewer feels its vibration in the body that art really takes on a further sublime quality, filling us with awe. 20/20 Accelerando explores this idea with an inner narrative about the female astronaut's recovering memory. Time is multi-dimensional in Albuquerque's film, which combines figurative imagery from different historic periods, but the Embodiment artworks change within the time of viewing as the viewer physically moves around the gallery space. Albuquerque is sometimes called "The Queen of the Now," because she draws from her daily meditation practices of being fully present in the moment and the space she inhabits as the inspiration for her art practice.

Albuquerque's interest in the vibratory quality of color is "a way of bringing attention to the different vibrations that affect us." She calls this our "response ability." At first glance, a color might look like purple, but on further reflection it is not really purple but another variation of brownish-purple. Her gold and silver discs are really concaves, but seen from a distance they can turn into convexes. These colors and compositions require serious attention because their inner life is so rich and metaphoric. As the Embodiment title suggests, these artworks are corporeal, so the discs are also like beating hearts, and the density of the background has a fecundity that suggests the power of natural growth in nature, the human body and feminine psyche. Merleau Ponty said every painterly technique "is a technique of the body." From a phenomenological perspective, the body is the locus for experiencing the world from the inside out -- and thus provides the most powerful metaphors for painting. 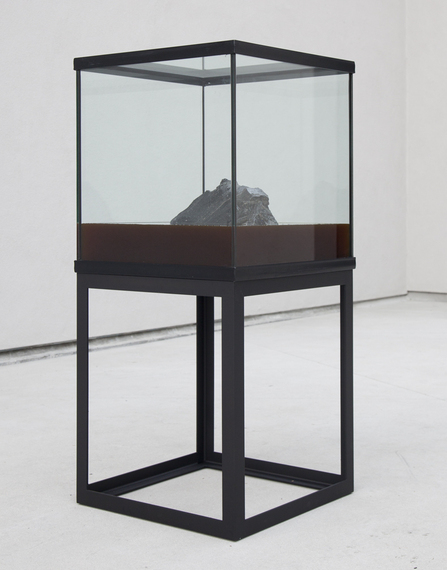 Art is physical and the vibratory quality of great art must be felt in the body, just like music. As Walter Pater says, "All art constantly aspires towards the condition of music." The film's music combined with the performers chanting the names of stars in the opening performative sculpture demonstrates this idea. Albuquerque's wall sculptures also explore this idea, but in a more gentle, abstract way. Her sculptures are made of transformative materials with metaphysical meanings: like honey, which is the nectar of the stars (because bees pollinate to the rising of certain stars), salt which is a mineral and copper which is a conductor. In Albion -- which means "world soul" -- she combines obsidian and honey, hardness and sweetness. Albuquerque says her signature ultramarine is blue, "not because it forces itself upon us, but because it draws us after it." But it also recalls her childhood growing up in Tunisia, looking out at the vast Mediterranean Sea and sky.

Albuquerque was the recipient of MOCA's Distinguished Women in the Arts award in 2014. Her works have been exhibited at numerous museums, including MOCA, LACMA, DFMOMA, Musee d'art Moderne in Paris, National Gallery of Modern Art in New Delhi and Corcoran Gallery of Art in Washington D.C. 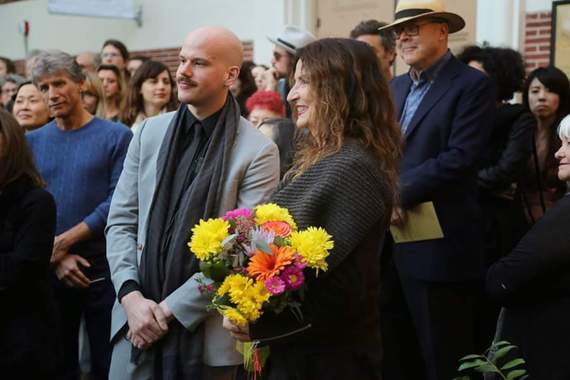 The expansiveness of Albuquerque's curiosity in the mysteries of life is infectious. Leo Tolstoy defined art as infectiousness, arguing that when we are "infected by the feelings which the author has felt, it is art." The expansive feeling in Albuquerque's artwork is uplifting and inspires the viewer to feel her wonderment. Albuquerque is a teacher -- in every sense of the word -- who inspires generations of artists: those she teaches at Art Center College of Art (where she is on core faculty of the graduate program), and the younger artists she collaborates with in an expanded skill set of different talents - like Hollywood productions. 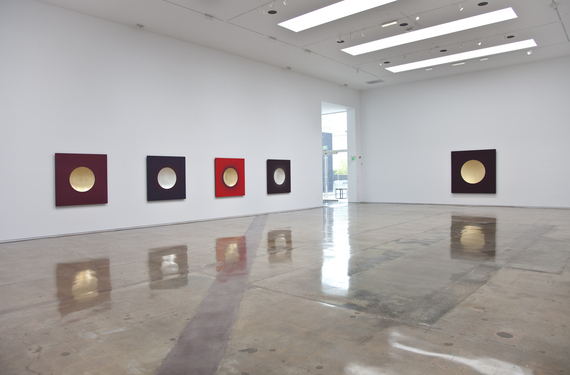 Neuroscientists recently discovered that the brain chemistry of art lovers viewing art they love, or music lovers listening to music they love, or book lovers reading books they love, effects the same areas of the brain, as falling in love. So, "What's Love Got to Do with It?" Everything.

It is taboo to talk about love in art criticism because it is assumed that love cannot be discussed with criticality even though it is the subject of the greatest literature and music. In academic, postmodern art-speak, it is considered more serious to talk critically about abject art, pathetic art, transgressive art or ugly art. This is disembodied intellectualism, disconnected from any curiosity about nature and the stars and confined to deconstructing culture, which is sadly limiting.

In contrast, love is the most expansive feeling and connects body, mind and spirit with nature -- which is joyful limitlessness. Albuquerque literally pours love into her labor-intensive artwork through applying multiple layers of gesso, before adding layers of natural pigments with such care to resemble the stars she loves so much. Again, "we are infected by the feelings" she feels and "it is art." (Tolstoy)

Any exploration of deep space is full of love. Not the corny, clichéd, sentimental, shallow concept of love sold by the mass media, but a deeper, reflective, feeling which comes from an expansive perspective of our place within an infinite cosmos. Albuquerque redraws limited "outgrown maps of consciousness" (Sontag) with her interstellar consciousness of a space where art, physics, poetry, music, dance and mythology interconnect.