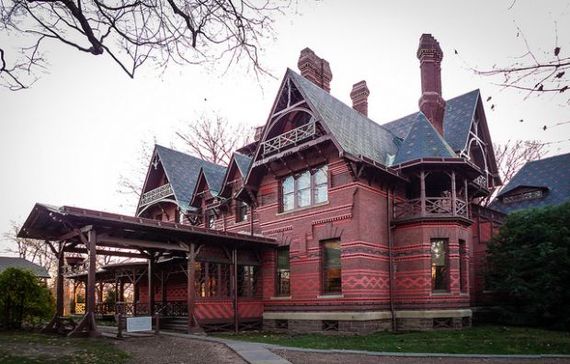 It's no secret that many of America's greatest literary icons inserted autobiographical details into their works, but there is perhaps no better way to get to know each author than by visiting his or her home. House museums dedicated to literary giants like Walt Whitman, Nathaniel Hawthorne and Ernest Hemingway allow you to get a glimpse into how each writer lived, wrote and found inspiration, and they're scattered throughout the United States. Spanning centuries and genres, these seven homes celebrate some of America's most treasured wordsmiths.

Mark Twain
Mark Twain said he spent some of his happiest and most productive years at his Victorian Gothic mansion in Hartford, Connecticut. And literary critics would have to agree: It was here that he wrote "The Adventures of Tom Sawyer," "Adventures of Huckleberry Finn" and "A Connecticut Yankee in King Arthur's Court," among other classics. You can tour The Mark Twain House & Museum, a 19th-century property with Tiffany-decorated interiors, artifacts and exhibits, and see why he affectionately said the home "had a heart, and a soul, and eyes to see us with."

Walt Whitman
In 1884, Walt Whitman's "Leaves of Grass" was so successful that he could pay $1,750 for a two-story frame house in Camden, New Jersey. He called it "my little shanty" and "my nook." It was here that he wrote numerous works and oversaw the final revisions of "Leaves of Grass" just before his death in 1892. You can tour the Walt Whitman House, a New Jersey State Historic Site and a National Historic Landmark, for free by guided tour. If you want to explore even more of Whitman's past, pay a visit to the Walt Whitman birthplace in the Long Island town of Huntington, New York. The farmhouse, which was constructed at the beginning of the 19th century, shelters the author's portraits, original letters, manuscripts and artifacts.

Ernest Hemingway
Hemingway's home in Key West, Florida, is far easier to visit than his house in Havana, and it holds just as much history as his Cuban residence. In this 19th-century Spanish colonial-style house, the Pulitzer and Nobel Prize-winner wrote "To Have and Have Not," "The Snows of Kilimanjaro," "The Green Hills of Africa," and began "For Whom the Bell Tolls," among other classics. Inside the home, you'll find the portable Royal typewriter he used to compose his masterpieces, as well as Spanish antiques, hand-blown Venetian glass, and the original furniture he and his family used. Step outside into the garden and you'll likely cross the path of the 40 to 50 six-toed feral cats that reside on the property's grounds. Hemingway was given a six-toed cat by a ship's captain, and it's believed that the felines that currently roam the property are descendants of that cat.

Thomas Wolfe
In Thomas Wolfe's autobiographical novel, "Look Homeward, Angel," he called his home "Dixieland" and his hometown "Altamont." He grew up in Asheville, North Carolina, in the boarding house that his mother owned and operated. His own character, Eugene Gant, "was ashamed of Dixieland," and the author's first book is filled with veiled references to residents of Asheville. In fact, it scandalized the town so much that Wolfe fled soon after its publication in 1929 and the book was banned from the local library. Luckily, the Old Kentucky Home is still standing, despite the town's historic ill will, and operates as the Thomas Wolfe Memorial State Historic Site.

William Faulkner
William Faulkner, a Nobel and Pulitzer Prize winner, wrote most of his novels at Rowan Oak, his Oxford, Mississippi, home. He bought the Greek revival house in 1930 and spent three decades renovating it, completing almost all of the work himself, much like his character Thomas Sutpen in "Absalom, Absalom!" You'll find his handiwork throughout the entire property -- literally: Walls of the study Faulkner built show his handwritten outline for "A Fable," which earned his first of two Pulitzers. The house also boasts original furnishings, including Faulkner's Underwood portable typewriter and the tiny writing desk where he wrote most of the Yoknapatawpha County saga, including "The Sound and the Fury," "As I Lay Dying" and "Light in August." After Faulkner died in 1962, some 1,800 pages of his early short stories and poems were found in a broom closet at Rowan Oak. The manuscripts were later transferred to the University of Mississippi and are the cornerstone of its Faulkner collection.

Eugene O'Neill
Eugene O'Neill, another Nobel and Pulitzer winner, wrote that his residence in Danville, California, was "the final home and harbor for me." Indeed, his six years at Tao House were his most productive: He composed "Long Day's Journey Into Night," "A Moon for the Misbegotten" and "The Iceman Cometh," among many other Pulitzer Prize-winning plays. Visiting his residence is a little tricky, as it's only accessible by the National Park Service Shuttle, but you can take a tour by making advance reservations or hopping on the national park shuttle in downtown Danville. Once on the 13-acre property, you'll find the house, the original barn (which now serves a performance venue) and many scenic walking paths. A grave marker for his beloved Dalmatian, Blemie, sits near walnut and almond orchards on the secluded, serene property that inspired the "father of American drama."

About the author: Marsha Dubrow writes about travel and the arts for examiner.com. You can follow her on Twitter @MarshaDubrow and connect with her on Facebook and LinkedIn. She earned an M.F.A. in Writing and Literature at Bennington College, which published her book "Single Blessedness."