The huge monitor lizard rests on a bed of filthy litter -- plastic bottles, wrappers, jars -- on the lushly jungled shore of soaring Rakata island, the largest remnant of, arguably, the most famous volcanic eruption in human history, when Krakatoa literally blew its top in 1883. Nobody now lives here, or on nearby Anak Krakatau, Child of Krakatoa, the active, smoking, still growing volcano that pushed though the sea's surface in 1927, and now tops 1,000 feet. 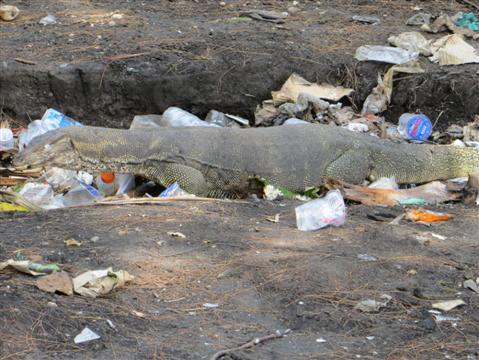 But Krakatoa's remnants lie in the the Sunda Strait, between Sumatra and Java, and nature's tides and currents bring enormous amounts of garbage discarded by communities along the shores of both huge islands -- flip-flops, plastic bottles, yogurt containers and much, much else -- to the black volcanic sands of a national park that should be one of nature's most pristine environments. 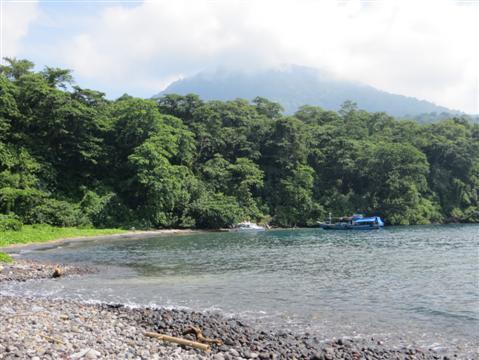 Even more paradoxical, Indonesians are generally among the cleanest people on Earth, forever showering, their clothes spotless, and their homes swept squeaky clean. Yet, they're way up there among the top competitors for a gold in the litter Olympics. 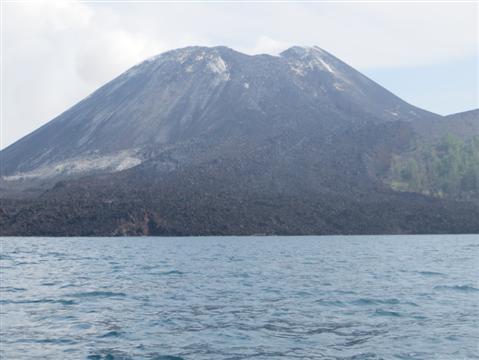 The lizard stirs, saunters over, sticks out a foot-long bluish tongue and gives Yours Truly a couple of almighty swipes with her very long, very vigorously lashing tail. Wow, that really stings, young lady. I'm not the one who dumped the garbage here! 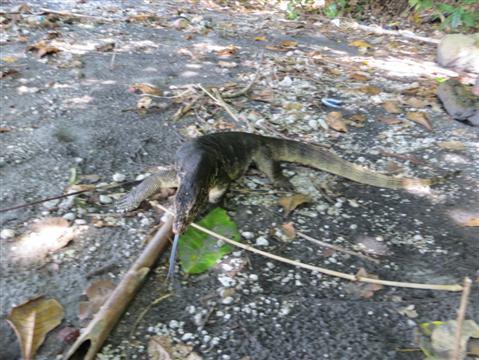 Wherever you go throughout the vast, superbly beautiful Indonesian archipelago, you're going to find litter, litter and then more litter, in the most idyllic or spectacular of places. Hundreds of miles to the north on Sumatra, the hill town of Berastagi nestles beneath two volcanoes -- massive, perfectly coned Sinabung soaring over 8,000 feet to the north, and the craggy battlements of 7,257-foot Sibayak sawing at the skyline to the west. 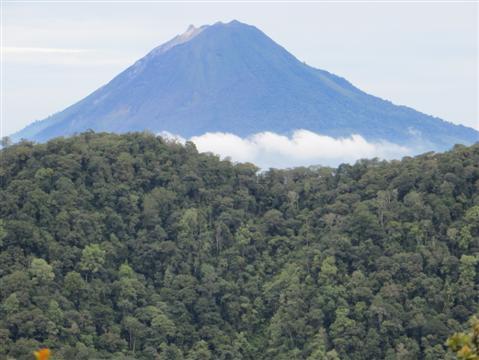 Sinabung began a series of eruptions in September, putting it out of bounds. But Sibayak is accessible. The scene is positively Dantesque. White and sulfur-yellow crags, sharp and saw-toothed, soar above a fringe of verdant jungle around the caldera, hissing columns of steam swirl up from ochre-ringed fumaroles and the smell of sulfur hangs thick in the air. Welcome to Hell's Kitchen. The Earth's great furnaces are working overtime. 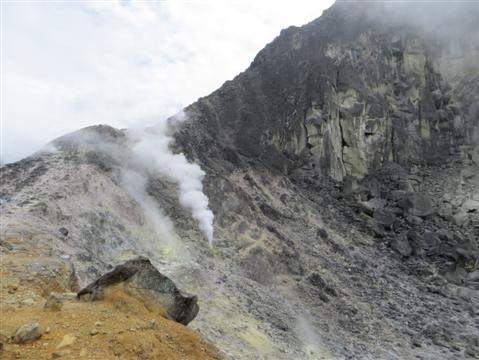 The fumaroles of Sibayak.

The landscape is one of utter desolation but for the bright young sparks who have clambered down the vertical cliffs to the crater floor to spell out their names in giant letters with pumice and volcanic rocks. A certain Jimmy seems to have the biggest one. 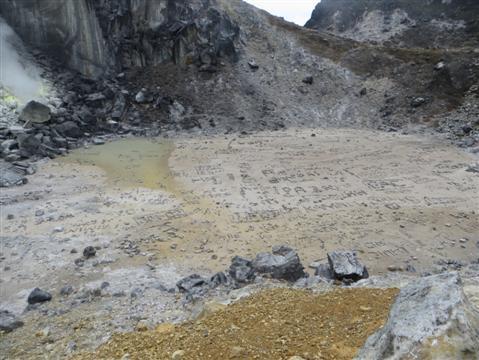 Name droppers at the bottom of Sibayak's crater.

But even up here, amid this scene of forbidding perfection, plastic water bottles, Oreo wrappers, Bintang beer bottles, cans, bags and discarded lighters, litter the stark summit landscape, and the slippery path and hacked stone steps, most of them broken, that lead up through the jungle belt. 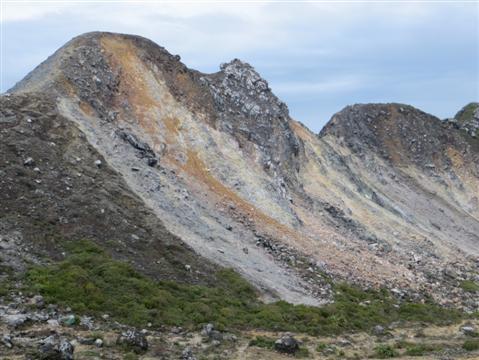 Moving on south to Lake Toba, the minibus driver does his own little bit to bury the vast archipelago under mountains of garbage, opening his window to hurl out a soda bottle. At 360 feet, Sipiso-Piso is Indonesia's highest waterfall -- a splendid sight hurtling out of a hole from an underground river just below the rim of the cliff near the lake's northern end. Stupendous views from the steps and walkways down -- and stupendous garbage littering the steps and walkways down. 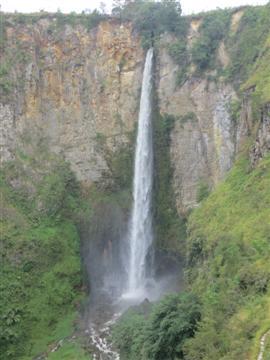 Nearby, in a grassy enclosure, is the palace of the Similingun kings, whose line became extinct in 1947. It's a collection of pavilions with roofs in the traditional soaring style, topped with horned buffalo heads -- and a collection of littered garbage. 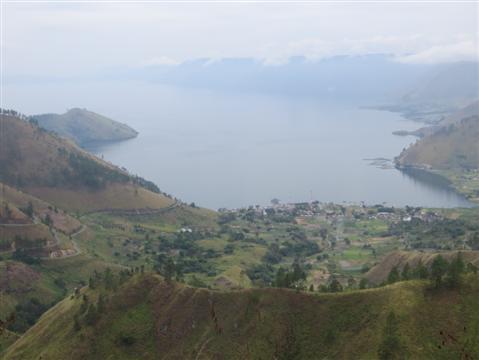 In the heart of a Borneo, in the Dayak longhouse settlement of Kaluas Palin, in the Indonesian province of West Kalimantan, a local lady kindly adds to the litter bonanza, hurling a large cardboard box and other garbage into the swirling current of a rain-swollen river. In remote Manokwari in West Papua, where spotlessly clean people live in wooden shacks on stilts, the canals are clogged with garbage. 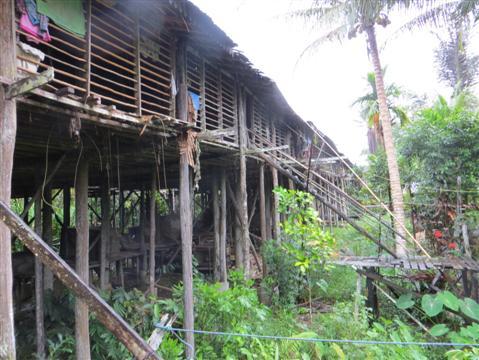 And on the island of Flores, at the top of Mt. Kelimutu, with its craggy volcanic cliffs softened by groves of trees and its three changing-color lakes -- Turquoise, Brown and Black Lake -- a sign written in stone says: "Local people believe this place is sacred. Please respect this site by not doing any damage or littering." It's certainly not written in stone metaphorically, for litter they do, and in great profusion -- plastic bottles, wrappers, cigarette butts and much else fouling the ground beyond the guard rails. 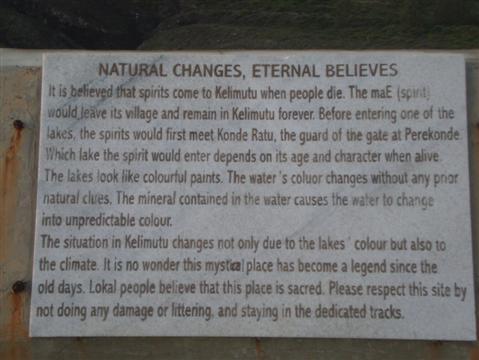 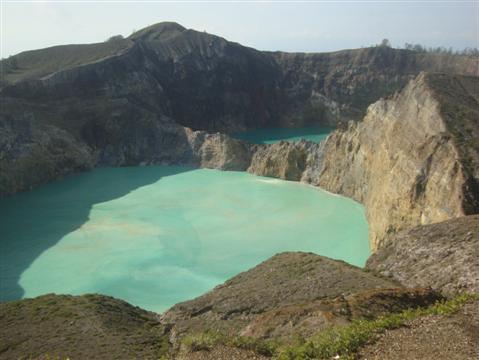 So it goes on, and not only in Indonesia. In Sierra Leone in Africa, Freetown's Lumley Beach is a wonderful crescent of white sand with palms and a lush mountainous backdrop, but it must have one of the filthiest, most polluted waterlines ever, replete with old plastic bottles, flip-flops, shoes, toothpaste tubes, combs, tooth brushes and any old crap you can think off. 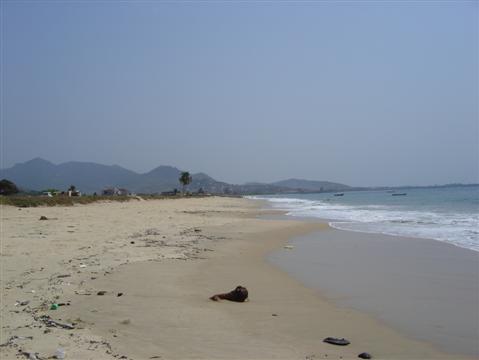 On the other side of the continent, in Somaliland, on the outskirts of the port of Berbera, a forest of "African flowers" spreads out within a stone's throw of a caerulean sea -- that at least is what the locals call the millions of discarded blue, pink and yellow plastic bags flapping vigorously from the branches of thorn trees or swarming in a mass assault over the bushes. 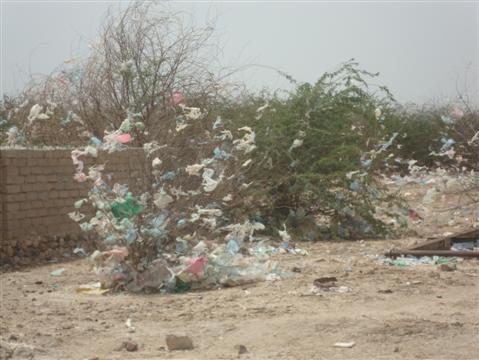 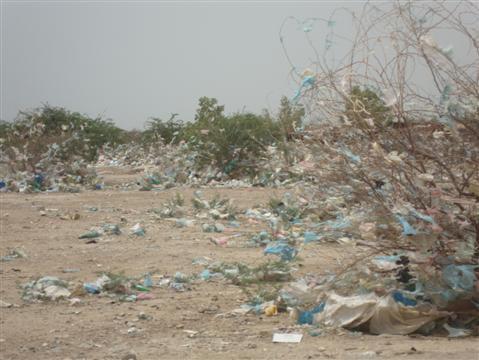 To the north, in Djibouti, layers of plastic bags drape the stoney arid plains and scant bushes. At Lake Assal, at 500 feet below sea level, the lowest point in Africa, a plastic bottle bobbles in one of the thermal pools, a plastic spoon reposes nearer the lake and an empty tuna fish tin has taken up residence on the blindingly white salt-caked shore. 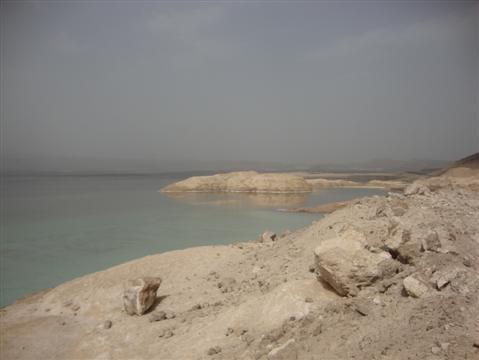 To the south-west, in Luanda, capital of Angola, on the hills above the port, the vast leprous scar of a musseque (slum) called Boavista (Good View), with satellite dishes sprouting from its shanty tin roofs, teeters on the edge of the slopes above a cataract of foul refuse. But that's to be expected of any slum anywhere, just as you expect garbage in a gully in the town centre of Wabag in Papua New Guinea. 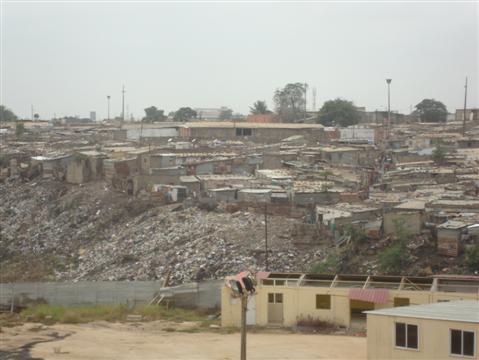 More interestingly, at the domestic terminal at Luanda's Quatro de Fevereiro (February 4) International Airport, the floor where check-in clerks sit is littered with refuse -- half empty food containers, plastic water bottles, reams of paper -- and the clerks' chairs are in various stages of brokenness. On the road east to the Kalandula Falls people, as usual, throw drink cans and other garbage out of the windows.

On the other side of the world in tiny Tuvalu in the South Pacific, at either end of the Funafuti atoll where lagoon meets ocean, garbage breeds everywhere -- old sneakers, crushed beer cans, plastic bottles, broken glass and plastic household items defile the ought-to-be pristine shores. 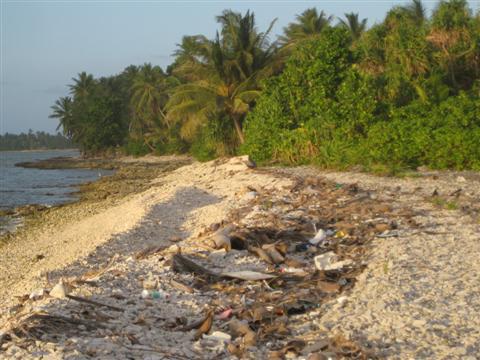 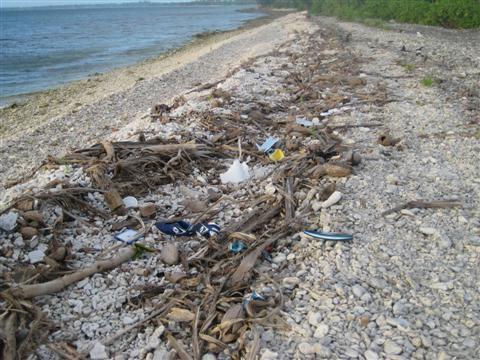 In the Atacama desert in northern Chile, hundreds of crosses and little shrines mark the spot where drivers, drunk or otherwise, have opted for a short cut across the ravines. That is, of course, when the mass of plastic bottles, broken glass and other rubbish has not totally littered up the edges. 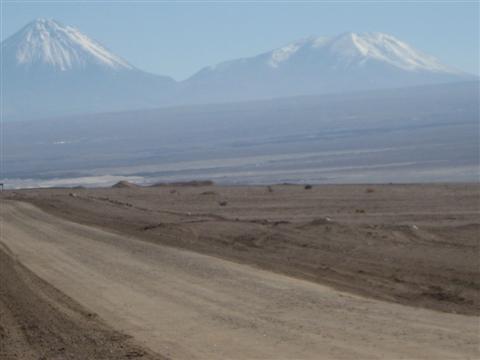 Road in the Atacama desert.

Even on the steppes of Mongolia, roads, fields and ovoos -- heaps of stones and wood draped with blue scarves where prayers are offered up to the spirits -- are littered with garbage, plastic bottles, bags, and broken glass. At the other end of Eurasia in the Caucasus, in the forests and along the trails of Mt. Kazbek in Georgia, plastic bottles seem to outnumber fish in some of the streams. 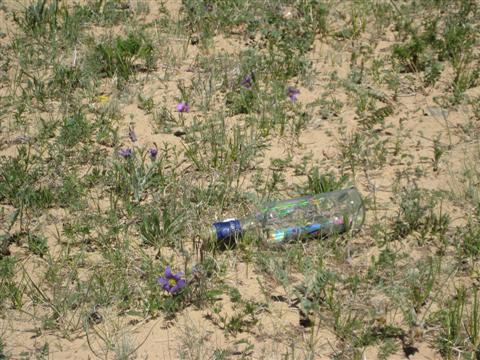 For the mother of all industrial garbage wastelands, make your way to Ebeye in the Marshall Islands, where a causeway leads six miles on across further islets to beaches filled with the moulding carcasses of rusted cars, trucks, construction equipment, steamrollers and boats, abandoned on the reef shoreline, ivy growing all over them. 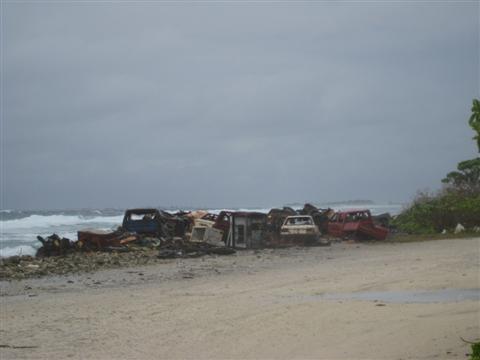 But if you think the scourge of litter is the monopoly of the developing world, think again. Even in Ottawa, capital of squeaky clean, first-world Canada, a visit to Rockcliffe Park and the Rideau Canal reveals ugly scabs strewn with garbage, broken bear bottles and Coke cans. 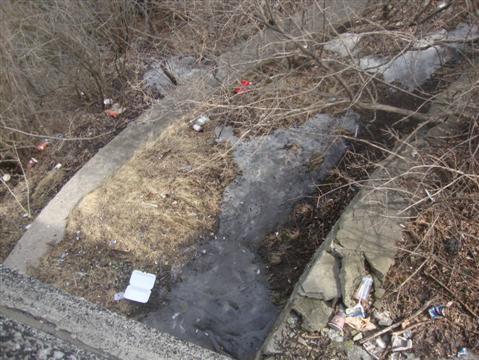 Wow! I could be back in Indonesia.