The death toll from the conflict in Afghanistan reached 2,000 last week.

If the U.S. hadn't reached that grim benchmark would the war still mean anything to the general public right now?

The conflict in Afghanistan is in danger of becoming a "forgotten war," as the 2012 election looms, with a little over a month left. Both campaigns' foreign policy talking points have focused on Egypt, Syria, and the dreaded possibility of conflict between Israel and Iran. Even Russia was highlighted as an area of concern in Mitt Romney's RNC speech, as he ignored the topic of Afghanistan completely.

Perhaps the war has been overlooked due to the horrid state of the domestic economy, but its more likely that Afghanistan, culturally, has been portrayed for so long as the furthest place from America.

In Rajiv Chandreskaran's latest book, Little America, the U.S. has had an interest in helping remake the country in its image since the 1940s, through development, diplomacy or defense -- with the multiple narratives of all of these "three D's" deftly woven together throughout its chapters.

This isn't too much of a surprise considering the U.S. has reportedly sunk over $400 billion dollars into the country since 2001, and yet we're still involved.

Little America, a masterful work of reportage, explores the conflict in Afghanistan after the 2009 troop surge announced by President Obama, focusing its sights on the Southern provinces of Helmand and Kandahar. The 33,000 troops that were sent into the country as part of the surge have now been withdrawn, leaving 68,000 American soldiers in the country.

The book begins with a narrative focused on development, beginning in the 1940s with the construction firm Morrison-Knudson -- one of six companies behind the Hoover Dam project -- working under contract with the Afghan royal government on a project to build two dams and irrigation canals in the Helmand valley. According to a vintage Time magazine article, firms like this were referred to as "ambassadors with bulldozers."

The king, Mohammed Zahir Shah, was looking to modernize his country through better irrigation and widened supply routes. Yet the terrain was often difficult to build in, and many of the construction projects were delayed or left incomplete, requiring additional loans to fund them.

While these nation-building efforts in Afghanistan might appear to some like trying to colonize the moon, the town known as Lashkar Gah in Helmand province, was affectionately called "little America" by the U.S. citizens of contracting firms living and working there, and their living arrangements were replete with suburban style homes, tennis courts, and a pool.

Little America then, is something of an oasis in Afghanistan, worlds-apart from the unforgiving terrain in much of the landlocked, mountainous country. For readers of the Iraq war-focused Imperial Life in the Emerald City -- which became the basis for the 2010 film The Green Zone, starring Matt Damon -- Chandreskaran's description of the Republican Palace in Baghdad lurks as a clear parallel, linking both books thematically.

Representing the diplomatic portion of the book is special representative to the region Richard Holbrooke. As a principal character in the book, Holbrooke is seen as a Clinton-administration holdover, and is unrelenting in his distrust towards President Hamid Karzai's partnering with America. He's also a source of annoyance to key actors in the department of defense and presidential aides, but mainly to Bush administration War Czar, Lt. General Doug Lute.

Holbrooke is depicted realistically but sympathetically in the book. He's been marginalized and clearly "doesn't have president's trust," even though he's got the backing of Secretary of State Hillary Clinton. The text portrays him as a much larger-than-life character than humble public servant who uses his sharp elbows to get through much of the bureaucratic infighting.

But his reactions are relatable, as anyone who has been left out of an important meeting at work can probably attest to what that feels like.

These personal interactions also play out through the defense section of the book, where the author focuses on the U.S. military carrying out its counter-insurgency strategy, or COIN in Washington-speak. COIN doctrine comes down protecting the Afghan civilian population, rebuilding the government, and then stabilizing it.

It is in the theater of war where Chandreskaran arguably creates his best storytelling. Embedded with a platoon, he covers the Marines, and skillfully conveys a strong sense of empathy for what the troops on the ground are facing. When he focuses on the field commanders, figures like General Larry Nicholson, and the men in battle, you can feel his passion about sharing their stories.

The third chapter of the book called "marineistan" -- based on a comment made by Ambassador Karl Eikenberry about the marines' independence from the other international security forces -- gets the reader so close to figures like General Stanley McChrystal, you'd think you were sitting there around the table in Camp Leatherneck laying out all the military options. 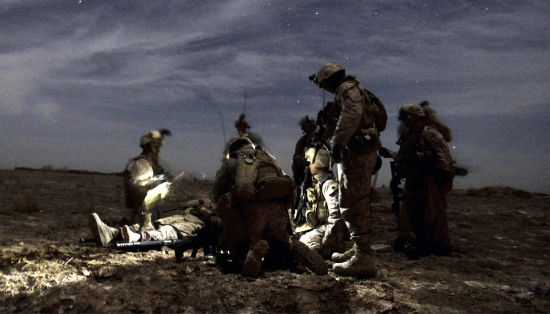 Raymond Barrett, a journalist who reports on the Middle East, casually stated there was no mention of any of the casualties of this conflict, on both the American and Afghan sides, after we had listened to Chandresekaran speak at a recent book launch event held by the Century for a New American Security -- where he is a writer-in-residence -- on June 26 of this year.

One only needs glance at the Index to confirm that this information is mysteriously absent in Little America.

This brings up an important observation to critique than the book itself: Are embedded journalists so close inside the war that they have trouble seeing the bigger picture?

Certainly, access to the establishment might have something to do with it. If you were a journalist and had the U.S. military protecting you in a conflict zone, would you present the facts without some bias? Or even, could you?

That might be the one flaw in an overwhelmingly well-written book.

Even if the lack of mentioning causalities in a book mostly about war seems like a major oversight, it appears Chandresekaran's real target is to nail the politicking behind the decision-making process.

The lives of the U.S. military, not to mention countless Afghans, are at stake with U.S. foreign policy, in which the petty bickering and posturing of the players creates "the war within the war."

Yet their bickering has gravitas; their decisions can cost lives.

And when all is said and done in the "fog of words," one major casualty remains: Richard Holbrooke.

Holbrooke died of a heart attack on December 13, 2010, no doubt due to the stress of his role. His last words were reportedly: "ending the war in Afghanistan would relax me."