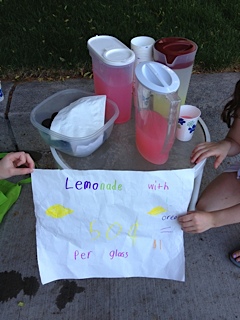 According to two young girls selling lemonade on the corner of Fullerton and Lincoln in Chicago, their pink mix was "by far" more popular than the classic yellow. The study of pink has become a hobby of sorts for me, so I asked the pair why they thought their all-ages customers preferred it.

"It's more colorful," the 8-year-old chimed.

Her older sister, age 10, agreed. "And maybe people usually think of just the regular lemonade, so they like to try something different." As she poured two cups of the pink drink for my friend Susan and me, I reflected on the people who used to raise their eyebrows at me in the early '90s when my toddler son's favorite color was pink.

From the stuffed animal toys he picked out, to a beach pail, to his sticker binder, to the pair of nylon sport shorts he practically lived in from ages two to four, the colors ranged bright pink to neon pink. Definitely colorful and decidedly different from what most boys were drawn to.
My son didn't care what other kids or grown-ups thought about his color of choice. (He still doesn't.) And he liked it when people couldn't tell if he was a boy or a girl. (He still does.) His curly blond hair was long. He often traveled with a Barbie doll. And those telltale pink shorts were apparently code among the ignorant that I was a bad mother. Because if a boy wore pink back then it meant he was going to be gay. And if he were growing up gay, it could only mean that I was an overbearing, controlling mother who interfered with his developing masculinity. I hated the stares and the implication. And I began to resent pink.

It wasn't until 1998 that I felt vindicated from the entrapment of pink and the wrath of its accompanying gender stereotype. First, I read clinical psychologist Harriet Lerner's The Mother Dance: How Children Change Your Life and learned that as late as 1939 it was boys who wore pink while girls dressed in blue. That same year I went to a Rolling Stones concert where Mick Jagger strutted out on stage in a hot-pink, button-down shirt. Pink was just a color, for God's sake, not a label.

Surprisingly, pink for boys remains controversial. Last year Jo B. Paoletti wrote Pink and Blue: Telling the Boys from the Girls in America, a book that chronicles the "gendering" of baby clothes. And today the mothers of toddler boys wearing pink are bolder and braver than I once was. They're moms who don't hesitate to challenge a glaring stranger with "What are you looking at?"

Back on my block in Brooklyn, 7-year-old Oliver was selling only pink lemonade at his sidewalk stand. He thought pink tasted better than yellow. But it was my artist neighbor Dean who summed it up best: "Pink is the happiest color."