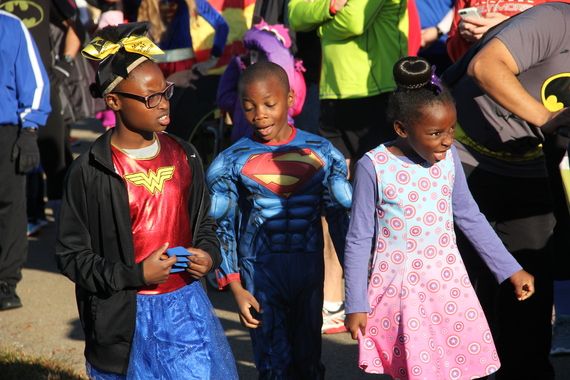 In our Fort Wayne neighborhood, Halloween is a serious candy free-for-all. We bought 12 pounds of candy and were out within an hour, and this as kids were still dashing from house to house, parents in tow.

But the real treat for us was recognizing how costumes had changed from our time in the 1970s and early 80s.

A little African American girl, maybe five or six, walked up with her mom. The girl wore a Spiderman costume, sans mask.

"I love your costume," my wife and I said.

The pony-tailed girl puffed out her chest.

In an election year when a woman is trying to break the highest ceiling in American politics, even as women have been denigrated and the phrase "Make America Great America" sounds like an easement back to traditional gender roles, my wife and I couldn't help but be entertained by young girls stretching past cultural norms and expectations.

We saw lots of girls wearing Wonder Woman, Batgirl and Supergirl costumes, but we also saw a surprising share of girls like the pony-tailed Spiderman, sporting Superman and Batman gear.

We saw also girls dressed up as first-responders, soldiers and astronauts.

There was a young woman dressed as Eggs from the cartoon film Boxtrolls. (She was quite surprised that we knew the character.) Eggs' is male in the film, but his gender is superfluous. His character is moved in the movie by love and sacrifice, understanding the nature of "others," and rising up against power that uses fear to corral a populace.

The Mad Hatter stopped by. She looked the part and played it up down to voice and mannerisms. How can you not love that?

My wife, who teaches sociology, multiculturalism and women's studies, noted first out loud what I was observing internally. We grew up in an era where costumes stuck to gender norms. There were lovely princesses, not Boudica, the leader of a Celtic tribe made popular in comics and games. Nurses were matrons from central casting, not valorous and celebrated. Wonder Woman was less fierce.

So here we were on our porch handing out candy to girls who represent a re-imagining of our culture. We saw some Ghostbusters costumes, some store bought and others handmade, worn by boys and girls.

"Ghostbusters!" Lisa said to one of girls. "I love it. Jillian rocks."

The girl, probably about 10, blushed and grinned.

"Thank you," she said before scampering off.

The moment meant something Lisa. We were both disgusted by the vitriol leveled at the women cast in Paul Feig's Ghostbusters remake, particularly the racist rants hurled at Leslie Jones and homophobic nonsense flung at Kate McKinnnon.

Our son absolutely loved both the remake and the original. Our 12-year-old seventh grader understands that stories reconfigured and retold aren't that big of a deal. The original Ghostbusters is a funny, quotable touchstone, but it's not the Battleship Potemkin. Nor is the female cast an abomination tantamount to Hollywood adapting Ralph Ellison's Invisible Man with Matthew McConaughey in the lead.

Of course, we what we didn't see was boys bending or breaking norms. Lisa and I came of age in the androgynous 1980's when musicians such as Prince and David Bowie took joy in poking a finger at the establishment by upending social and gender norms. And Hollywood is full of actors who've made a habit of cross-dressing for comedy, from legends such as Milton Berle and Flip Wilson to Tyler Perry as Madea.

Yet the thought of a boy letting loose and dressing up in roles considered female is still troubling to some. So on Halloween night, we saw boys (and girls)- dressed up as doctors, but no boys dressed as nurses, for example. But if a girl could dress up as Hagrid, Harry Potter's giant of a friend, why can't a boy pretend to be Professor McGonagall? It's not the gender of these characters that we admire, but their wit, charm, intelligence, and loving spirit.

Still , what we did see, the discarding of gender norms by girls and their parents, is a good thing. It nurtures creativity, and, more importantly, it breaks down barriers between the false gender norms that define what is a "male" role and what is a "female" role. Watching the kids on Halloween is one of the best things I've observed in an unnerving year.

Fredrick McKissack is a writing fellow for the Center for Community Change.