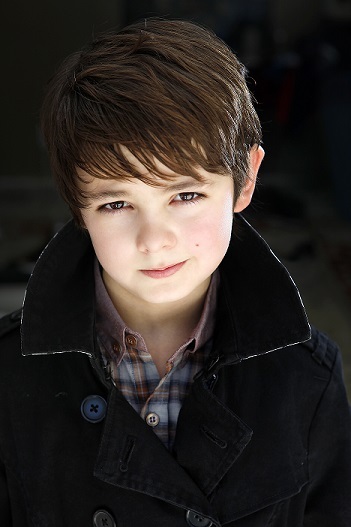 Young performer MAX CHARLES has won over hearts with his portrayal of the young Peter Parker in "The Amazing Spider-Man" and its sequel. Currently, you can see Max as Bradley Cooper's son in American Sniper by Clint Eastwood. Photo By Lesley Bryce.

Max Charles has a resume longer than his arm. This confident young man is not only adorable, but a pleasure to interview!

Let's see - Max is in the recently released feature film American Sniper, just did an episode of the controversial TV series Constantine and oh, you may remember him as the young Peter Parker in The Amazing Spider-man movies.

But wait! There's more! Read on to find out more about Max Charles!

Tell us about Elf: Buddy's Musical Christmas. What was your audition like?

It was a fun movie to do, because I got to sing and that was cool. It was my first musical, and I really liked doing this so I hope I get to do another one. I also got to see how stop motion animation works and visit the studio. I was offered this role, so there wasn't an audition for me on this one.

Who helps you decide which roles to audition for?

I have an awesome team. We all talk about what projects are the best for me to work on for my career and which ones to pass on.

You've done an episode of the TV series Constantine which has gained a lot of criticism for the main character not being true to the comic book character. Do things like this make you wonder if other super hero characters that we see on TV and film today are not like they were written in the comics? Who is your favorite super hero?

My favorite super hero has always been Spiderman. I even dressed up as him for Halloween when I was three years old, so it was really cool to play young Spiderman. I like the super hero comic books and I like to see what the actors do creatively with the characters and how they bring these superheroes to life in the movies.

When you went up for the role in The Amazing Spider-man 2, did you KNOW it was for the Spider-man movie or was the casting call very vague?

Describe your audition for Spider-man.

The first couple of auditions were with the casting director then I had a couple of callbacks with producers. Then I had a couple of meetings with Marc Webb and Avi Arad, before I was offered the role. I had to learn sides [pieces of script] for each audition, and then I met with Marc Webb a couple of times and he directed me to see how we worked together. Marc was awesome to work with and he's an amazing director. It was cool to work on this huge project as my first feature film. It was pretty cool to be the first person to ever play young Spider-man too.

How does your schooling work?

I'm in 5th grade, and I have a set teacher when I'm working on projects so I never really miss school. My favorite subject is math. When I finish my school work for the day I like to go play basketball, ride my bike or skateboard, play video games or go free running.

How and when did you get started in show business?

We were living in Tennessee and my brother Logan was starting to pursue his singing career. A producer saw his website and called him out to come do an audition in California when I was six years old. Me, my mom and my brother came out to California together and he did the audition then started doing more. I would always listen through the door at his auditions and beg my mom to let me do some auditions too. Amazing Spider-man was my first feature film audition so it was cool to book that. I also booked my first TV role and commercial then and that was True Blood and Mercedes Benz commercial.

Besides acting, what activities do you enjoy?

Besides acting I like free running, skate boarding, biking, basketball and I like to play Xbox One. My favorite games on Xbox are racing games mostly. I actually have a really cool skateboard that looks just like Peter Parker's because my brother Mason made it for me for my birthday two years ago.

You play Bradley Cooper's son in American Sniper which came out December 2014. What did you do for the holidays?

It was great to work with Bradley Cooper and Clint Eastwood on American Sniper and I'm excited for everyone to see this movie.

I'll be home for a couple of weeks at Christmas and we'll just be hanging out with family and friends. We always go cut down our Christmas tree and we have a big turkey dinner, like we do at Thanksgiving.

When did you join SAG-AFTRA?

I think I joined SAG-AFTRA when I was six years old. I don't recall having any direct contact with any union representative on set, but I know we worked under their guidelines.

You did the voice of Sherman in the 2014 film Mr. Peabody & Sherman. How do voice overs work? Did you ever see the original cartoons?

After I booked the role of Sherman I watched some old episodes from the original series. It was cool to see the old Sherman. I worked in a studio at Dream Works in Los Angeles for this project and recorded for about 2-1/2 years. Most of the time in a voice over you record by yourself with just the director. Rob Minkoff was fun to work with and an amazing director. I got to do one recording session with Ty Burrell and that was the first time I met him. It was really fun because our first scene was the one where we had to yell at each other. When we were done with the scene, we said "Hey, nice to meet you," and we just started laughing.

Now that the world knows who you are, do you have any fear about being safe?

I have an incredible support network, who always watch out for me and protect me.

Are your friends supportive of your decision to be an actor?

Everyone has been really supportive about my career so far. When I'm with friends, we just do normal kid things like video games or shoot hoops.

Do you travel a lot for work? Where is your home base?

I travel a lot to work on different projects, and my mom always comes with me. I was born in Dayton, Ohio and we live in Los Angeles, but it's fun to visit different places and meet new people.

Any advice for actors your age?

I would tell people my age to believe in your dreams and never give up!