Last Friday night in Billings, Montana, a little miracle occurred, and I was part of it. It has been a season of miracles here in big sky country, and Friday's was only the most recent.

The story began in 2012, when downtown Billings lost its independent bookstore, Thomas Books. It was not the only bookstore in town, or even in the downtown, but it was the only place offering a full line of new books - the sort of bookstore where you can walk in and count on finding the new Pulitzer winner, or at least a few of the backlist of your favorite regional authors. It was my source for the latest Sherman Alexie, Margaret Atwood, Barbara Ehrenreich, Louise Erdrich, Neal Stephenson, Calvin Trillin, Anne Tyler, and the rest of the short list of authors whose publication dates have me fogging the glass outside the bookstore.

Many locals mourned. We still had Barnes & Noble and Amazon, true. We weren't exactly stranded on the frontier without UPS. But losing our indie bookstore felt like a light going out. Many conversations between booklovers began,

"I just miss Thomases' so much."

There is something irreplaceable about walking among shelves of carefully curated books, touching their spines, sliding the richness of a hardback's thick paper cover into your waiting hands, reading a few paragraphs, then trying another. The smell takes you places you only wish you could go again - childhood libraries, beloved foreign booksellers. The camaraderie of a bookseller who makes purchasing decisions based on the readers who come to the store, not according to a corporate agenda, is priceless. We missed being greeted by name and the divine seduction of being offered a book that Susan Thomas knew would be exactly right. We were homesick for every bit of it, because a good bookstore is a home: a soul home.

Naturally, people began to talk about opening another bookstore, but the obstacles were tall and hairy, with fangs and oppressive body odor. The market forces that helped to close Thomas Books were still in play. Indie bookstores were recovering slowly from the recession and the blows they'd taken from the growth of e-books and online bookselling, but the profits remained marginal. The capital investment was large. Whoever took on this challenge faced the prospect of a years-long ramp up to the kind of profitability that would make it more than a one-person or one-family shop, carried on the backs of a few very overworked people.

Then someone - we think it was former Billings mayor Chuck Tooley, who is quite the instigator - spoke the word "cooperative", as in, "What if you formed a cooperative?" Most of us who'd been crying in our microbrews over Thomas Books had only the vaguest idea what a cooperative was. We knew about REI and rural electric cooperatives and the downtown food co-op, Good Earth Market. We suspected common ownership played a role, but how that was relevant to our lost bookstore was unclear. We may have stared at Chuck and encouraged him to have another.

Still, talk proceeded along these lines. To organize the conversation a little, in April 2015 I created a Facebook page called "Bring a Bookstore to Billings". A small group including me, local novelist Craig Lancaster, attorney Emily Stark, and my husband Andy Wildenberg, a computer science professor, formed a casual drinking club with a bookstore problem and began splitting up tasks to educate ourselves on what it might take to start a bookstore. None of us had any interest in running a bookstore, we just knew we wanted one and no one else seemed to be doing anything about it.

It was Emily who first dug in on cooperative formation by contacting the state cooperative association. This turned out to be the trigger for a spectacular leap forward. We soon heard back from the new head of the Montana Cooperative Development Center, a woman named Jan Brown who fairly vibrated with enthusiasm for the idea of a cooperative bookstore in downtown Billings. Yes, you can do this, she told us. You can do it bigger and better than you imagine, and I will help. She had a whole new set of tasks for us, but it was hard to mind with Jan cheerleading.

We finally sat down with Jan in October 2015. By then we had the rough outline of a business plan based on a cooperative model. Our capital would come from member-owners who would buy shares, we'd elect a board of directors, and the board would hire a general manager. The major problem of which one of us would fall on the sword and run the bookstore was solved. We could hire someone who actually knew the business, and the co-op would provide the funds to pay that person. It felt like genius had struck from the sky.

The intervening months have been a mad rush to stick together puzzle pieces by any means possible. We announced meetings by Facebook and assigned jobs to anyone who showed up. Some people came to a meeting or two then dissolved back into the ether, but this method of constant delegation also resulted in great finds like author and English professor Precious McKenzie, who tackled real estate hunting and found us a terrific space in a historic building near the center of the downtown. For her next act, she got us a grant from the downtown alliance for a building feasibility study. 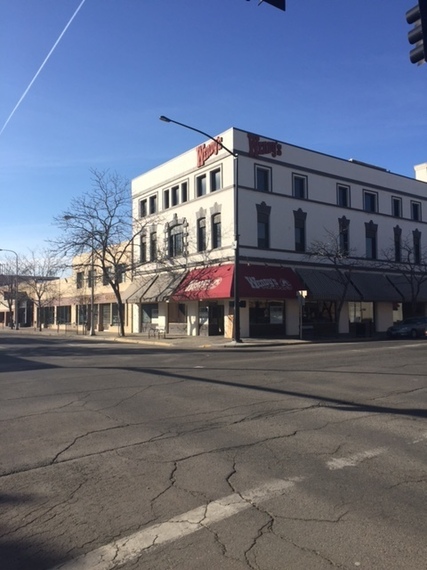 We interviewed bookstore owners across the state and talked over the operation and closure of Thomas Books in detail with the former owner. Psychologist Mark Taylor did a marketing survey and pulled demographic data. I got business plan help from the Service Corps of Retired Executives and Big Sky Economic Development and plugged more and more data into a business plan that soon stretched to 40 pages. We ran financial projections with the help of CPA Ryan Duffy. By the time we asked a feasibility consultant for help, he told us we'd already done the job we'd be hiring him to do.

People began to post bookstore visions on the Facebook page. "Here's what I imagine our bookstore might be like," they were saying. "Here's my favorite bookstore. Can we have something like this?" The creativity of our whole ad hoc community was getting juiced up around the idea that maybe, possibly, we could actually do this. A town really could just decide it wanted an indie bookstore and make that happen, even if no deus ex machina emerged to open one for us. Our wanting and doing might be enough. Beginning to understand that was incredibly powerful.

In the early months of 2016, we got bold enough to take the first step toward incorporation with the state of Montana. Creating a cooperative doesn't happen with one simple corporate filing, like creating an LLC. After the first filing, share subscription agreements go out and people commit to the number of shares they'll buy. Then there's a first general meeting - that was last Friday's miracle, a room full of more than 50 new bookstore co-op member owners, raring to make a bookstore together. Now another report goes back to the state. At that point, incorporation goes forward, shares issue, and member-owners write their checks.

We have commitments for over $24,000 in shares, plus the $8,000 building feasibility grant. We're more than 1/10 of the way to our 2016 fundraising goal and we haven't begun the public share marketing campaign. A placeholder web page is up. More than 330 people have joined the Facebook group. We're holding a bookstore naming contest. We plan to hire a general manager within the next month and open the bookstore later this summer. It feels giddy and crazy and there's an element of adrenalin rush to doing a thing none of us has ever done, but it also feels real. We've done our homework and the people involved are solid. We believe in each other and in this dream taking concrete form under our feet.

Last Friday night in Billings, Montana, a little miracle occurred, and I was part of it.