Liu Bolin, a Chinese artist known as the "Invisible Man," performed one of his signature disappearing acts at Eli Klein Fine Art in New York this week. The master of disguise vanished amidst a display of menacing-looking weapons in a live painting work dubbed "Gun Rack."

Bolin is famous for his "Where's Waldo"-esque projects, in which the conceptual photographer stands camouflaged with paint in front of chaotic scenes of children's toys or street artworks, playfully hiding in plain sight. But for his most recent project, the artist took on a heavier subject -- international weapons policies, attempting to shed light on arms control methods across the world.

According to Design Boom, Bolin's new work was motivated by a recent law in China that requires individuals to present identification and registration when purchasing certain knives. He is planning on creating another "invisible" portrait featuring a sword and knife as well.

"These are all real weapons, not replicas," explained gallery namesake, Eli Klein, in an email to The Huffington Post. "They were legal to have in the gallery as they were modified to fire blanks. And two armorers had to be on site at all times. They actually slept in the gallery on Saturday night."

Scroll through the images of Bolin's "Gun Rack Performance" in the slideshow below. Let us know your thoughts on the work in the comments. 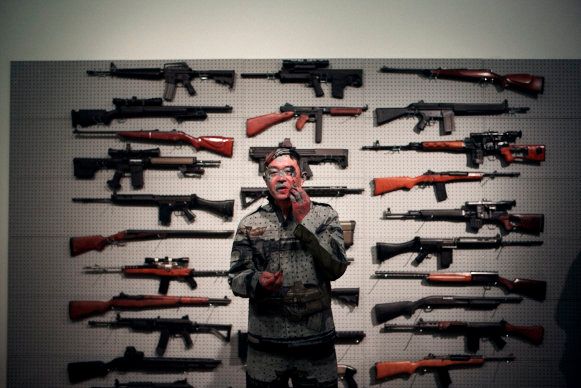