Painter Liu Xiadong is currently the subject of two recent exhibitions: "Between Israel and Palestine" at the Mary Boone Gallery in New York, and "Hometown Boy," at the Seattle Asian Art Museum. A leading figure in the "Neo-Realist" movement that emerged in China during the 1990s, Xiadong paints from life -- often in plein air settings -- and has an eye for narrative details, mannerisms, and subtle human interactions. Xiadong's brushwork is deft and direct and the varied locations that appear in his work suggest that his oeuvre is his travel diary. A documentarian with a heart, his canvases strike a balance between blunt description and narrative empathy.

I was able to interview Liu Xiadong -- who lives in Beijing -- with the assistance of curator Zandie Brockett. 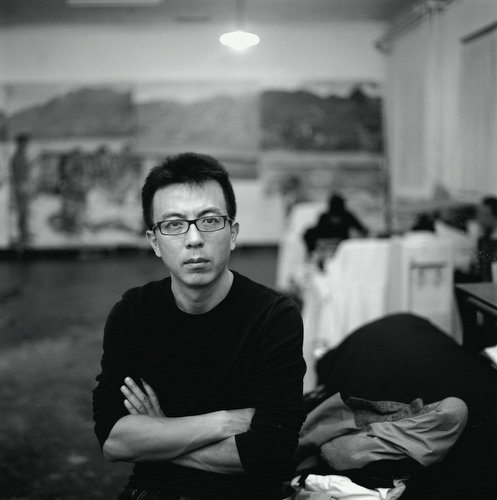 What can you tell me about your childhood and early background? Did you know as a boy that you wanted to be an artist?

When I was young, my home was in a small village. Over time -- due to the growing paper factory -- the village slowly turned into a larger town. We all lived in one-story homes and all the residents knew each other. When I think about my life then, I think it was very natural. Each house had many children, and all of the children in both my family as well as in other families got along very well.

When I was younger I used to study Gong Fu, but as I got older my parents thought it would be better for me to learn art, so I went to live with my uncle, who was also an artist. When I was about 13, I was selected by my teacher to test into the middle school that was attached to the Central Academy of Fine Arts (CAFA) in Beijing. I passed the test and was admitted into the school. 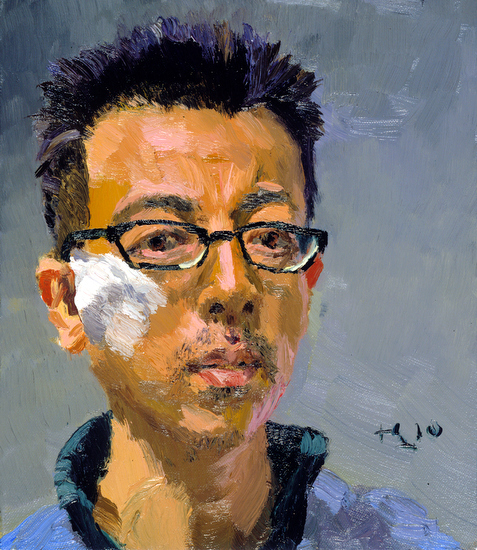 In your studies at the Central Academy of Fine Arts in Beijing you practiced oil painting. At the time, wasn't oil painting still seen as a western medium, and an unusual choice?

Oil painting is a Western tradition, but when it came to China about 100 years ago it was very welcomed, as it was very different from traditional methods of Chinese painting. Yes, I studied oil painting when I was at CAFA. We were taught the history and techniques of all the masters from the Renaissance through Impressionism, including Russian Realism: the latter has greatly influenced oil painting in China, and as a result has had an influence on my own work. 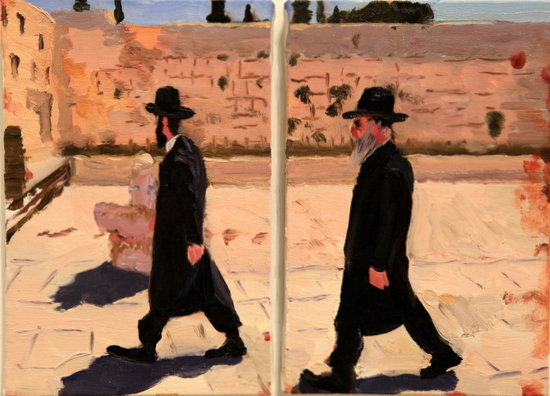 How did your studies in Madrid influence the direction of your work?

I think it made me think about the abstraction of objects -- it really helped my work and my appreciation of the manner in which the abstract form exists. I use an abstract perspective to depict people's attitudes and their mannerisms. 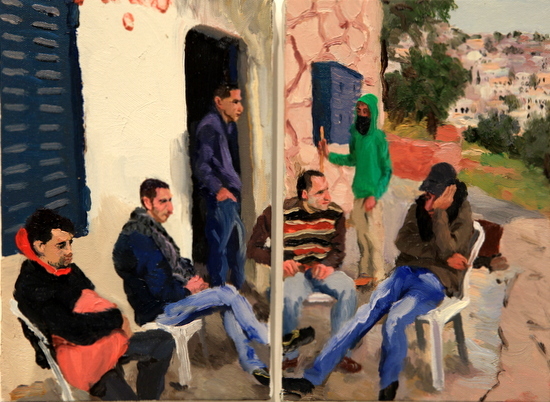 Tell me something about your career as a filmmaker.

In the early 90s, movie theaters prohibited anyone from showing their own movies: they would only show works of professional Chinese filmmakers and that which was produced by certified film-making entities. When I was graduating, my friends and I really wanted to freely express ourselves and our lives in our artworks: film was one medium of expression.

At the beginning we had to fund the movies ourselves and find a way to shoot these B+W films. In the 1992, I acted in Wang Xiaoshuai's The Days -- which depicted me and my lover's life -- and which was later chosen by BBC as one of the best 100 films in history. Around the same time, I also acted in Jia Zhangke's Beijing Bastard, which was about life, love and drugs, and the freedoms that coincided with the craziness of young life in Beijing; the film won the Golden Lion award at the 63rd Venice Film Festival. This was the start of the independent film scene in Beijing.

After, film in my life shifted in another direction, as it became more about documenting my own projects and giving the viewer an alternative view into my works. In 2005 I had this opportunity to invite Jia Zhangke to work with me on my Three Gorges Dam project -- he produced the two films, Still Life and Dong.

In 2010, Hou Xiao Hsien worked with me to produce the film for my project Hometown Boy, which is the exhibition currently showing at the Seattle Art Museum. This film won the Best Film Award at the Taipei Film Festival and the Golden Horse Award at the Taiwan Film Festival. My involvement with film has greatly changed and shifted over the years, but I feel that it is a new and more open perspective towards my own painting. 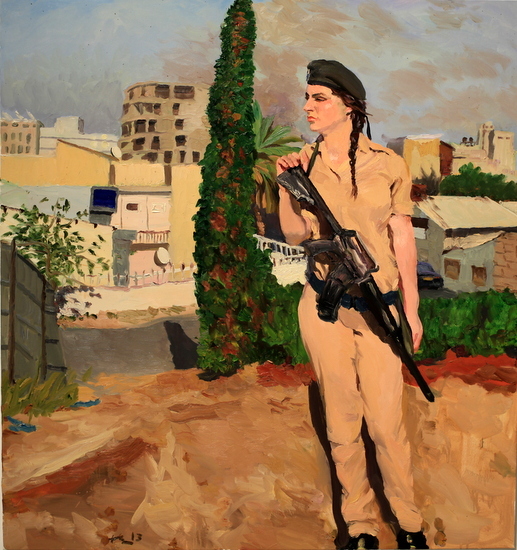 Tell me about the range of subject matter in your paintings.

I really like going to places that are in chaos or in a not entirely functional/developed state. I think that these places can more really show people's true attitudes, their lives and the environments in which they exist. I see it as an opportunity to break through these circumstances and in a very honestly manner explore their realities. These troubled environments also give me the power to breakthrough my own preconceptions and perspectives of painting through which I can express my own desires. 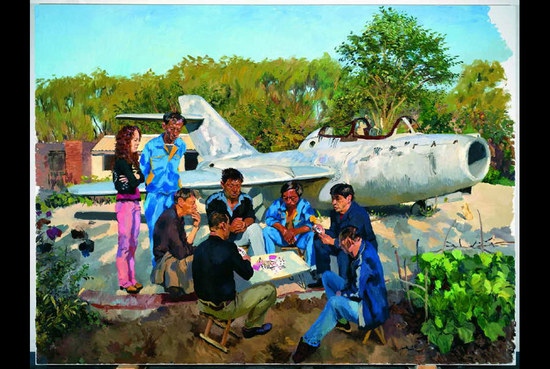 Can you briefly tell me about some of the themes and images present in your exhibition "Hometown Boy?"

China's changes and the changes that globalization has brought to China has lead to very significant changes. My hometown is a very, very small town. But the changes that happened there were also quite significant, including the construction of new buildings, the bankruptcy of a factory and the resulting of many people needing to find new jobs. I wanted to go back to my hometown and see this progress so that I could depict it in a way that represented the changes in China on a larger scale. I had to face the pessimism of a lot people. 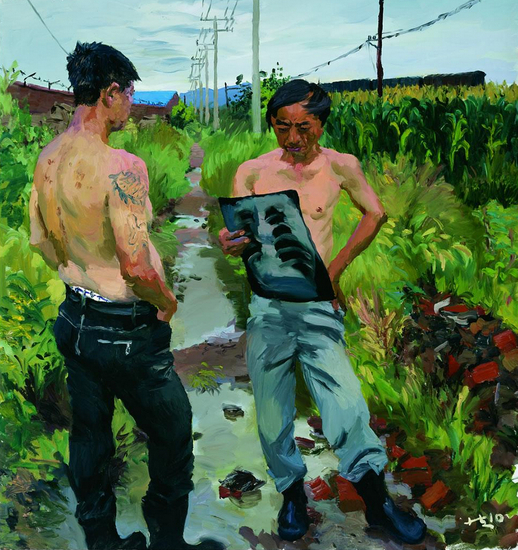 Can you briefly choose and discuss one of the major paintings you are showing in Seattle?

"Bent Rib." I painted the two of my friends from when I was a child. I asked them to stand on the side of the road and discuss their own health, creating quite a strange scenario. For the most part, you have these kinds of conversations at the hospital or inside of a private space: I think this is an absurd and strange view depiction of the life we live.

Since I live in a country of tremendous change, the realities of the life, and things that happen on a daily basis, often appearing in the news, really start to influence ones thoughts and ideas. When I paint, I like to incorporate many elements that may influence us. This painting is an example of what I have learned from my own daily life: namely that strange things do happen and that you can never guess what you may unexpectedly run into on any given day. 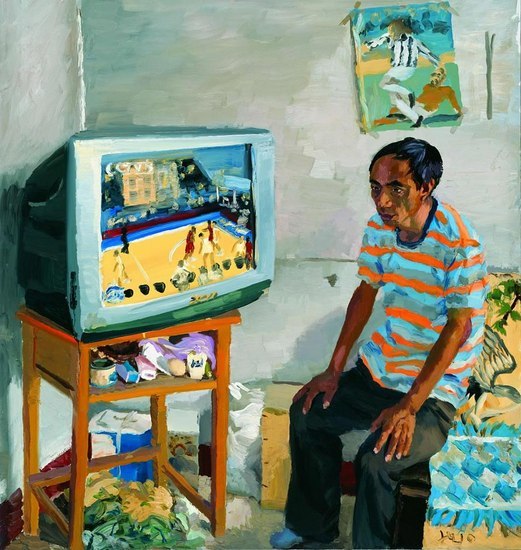 Who are some other living artists whose work you admire?

Jasper Johns. I feel that works that are seen in few places by few people are the best. 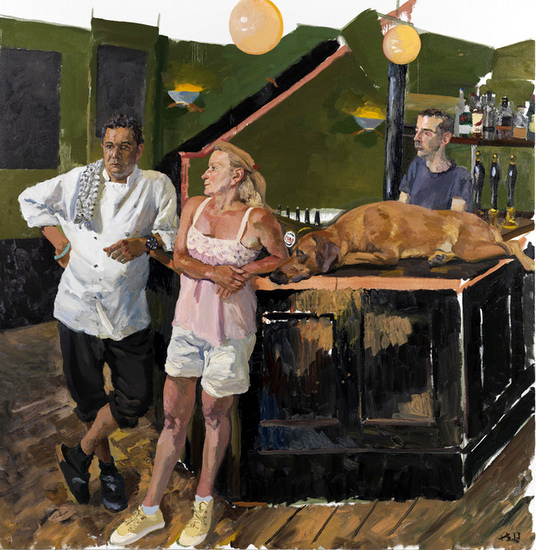 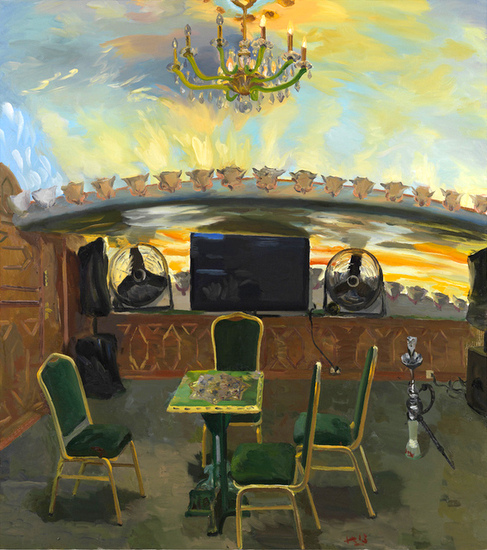 Is there anything else you would like to say about your life or career?

I hope that my work can enter the realities of life and follow its changes. I want my work to have a really natural progression and way of depicting that which I paint.

Liu Xiaodong
In Between Israel and Palestine
Mary Boone Gallery
September 5 through October 26, 2013