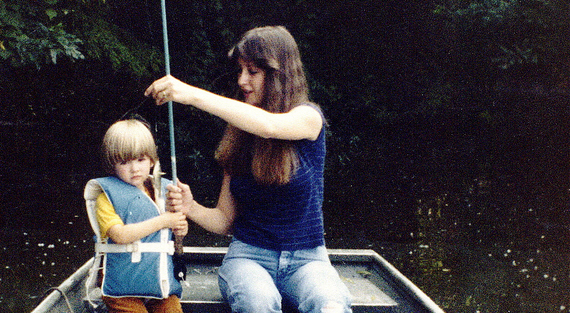 Natae Rayner did not know what she wanted to be when she grew up. A cheerleader in college on a ballet scholarship, Rayner had a variety of interests, but no clear career direction. So she asked her mother for advice. Rayner's mother, Gayle Darby, had one question for her daughter: "What do you want out of life?"

Her mother replied, "If that's what you want, why don't you take an automotive class?"

Although this is not typical mother-daughter advice, Darby was speaking from first-hand experience. At the time of their conversation, Darby was finishing her own BS in Automotive Technology, after having had a successful career in the Railroad Industry.

Rayner took her mother's advice. The first and second women ever to graduate from Weber State's Automotive Technology program, both Gayle Darby and Natae Rayner have excelled in their careers in automotive. In fact, they both hold management positions overseeing training at luxury automotive companies. Natae Rayner is General Manager of Training and Development for Audi of America, and her mother, Gayle Darby, is National Manager of Dealer Development for Lexus College at Lexus, under Toyota Motor Sales of USA.

Inspired by their story, I talked to both women about how they decided to pursue non-traditional careers for women, the challenges they have faced, the opportunities they have made for themselves and the advice they have for women pursuing STEM careers.

Yury: Natae Rayner, what did you think when your mother first told you to consider a career in automotive?

Rayner: My mom has always been successful in everything that she has done, so when she said, 'Try something different. Try something that's not typical for a woman, because you will succeed in that area' I considered it. At first I was kind of like, 'Okay, automotive, huh. Well, let me try this, let me put one toe in this.' So, I took one class and enjoyed it. I continued dancing and cheer leading but I decided to go full-force into the automotive technology program. And from there, I started taking every class I could possibly take. It was a real kick. I took the paint and body classes, which was really exciting, really fun and really different. I even started working at a parts warehouse, so I could still be immersed in the automotive area. 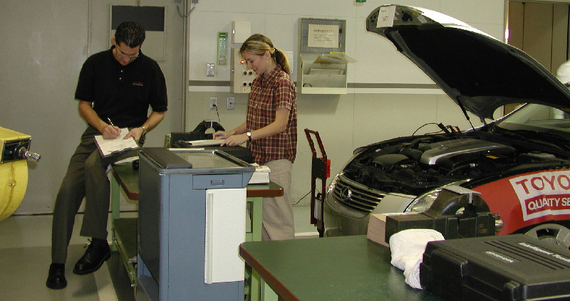 Yury: What has it been like to be a woman in the heavily male-dominated automotive industry, both in school and then in the corporate world?

Rayner: I would say for the most part, it's a very supportive environment. You don't really know what to expect when you put yourself in that situation, but I would say 99% of the time, I was supported through school, being the only woman in the program. You put yourself out there and hope that people will accept you and that it will feel right, that it will fit. Really for the most part, it was an amazing experience.

The funny thing is, is when I started my first job (at Toyota), I started off in the technical training area. It was right when the Prius was launching for the first time in the United States, so I was writing hybrid courses. I was writing technical information on engines and then I would have to stand up and train our trainers that were out in the field. So you can imagine all these older men who were set in their ways and there's me -- this 21-year-old blonde little girl -- coming in to teach them how a hybrid system works. It was scary; there were times that I was really nervous, not necessarily because I didn't know that I had it, but because I was being judged. But, it went very well; I proved myself to them, we became the best of friends and to this day, I still talk to some of those men. Everybody was very supportive. I have found that throughout my career. Have I been tested? Yes. But, overall it's been a really good experience.

Yury: Gayle Darby, what was it like when you started at Weber State as a woman in the Automotive Technology program?

Darby: When I was starting school I thought I was the only one who didn't know anything. I was the only woman, and I looked around at all these guys and thought they all worked on cars with their dads and knew what they were doing. I came to find out, they didn't know a thing, either!

Yury: What was it like when you started at Toyota, and what have you learned in your career there?

Darby: My first job at Toyota was in quality assurance. The first thing I did in quality assurance was to lead groups of Japanese men to do port-of-departure and port-of-entry inspections on the Lexus vehicles. That meant I was leading men that were of an older generation. I noticed they would never look at me; there was never any eye contact. And it was kind of scary. I thought, 'Gosh, what's wrong?' And then I started to inquire a little more and realized it was very much their culture and started to study their culture more.

I certainly had really challenging days, but it just got easier and easier. And then, you start creating laughter and having a lot of fun and connecting. I had 4 regions when I moved up to Senior Engineer. I had Taiwan, Canada, Puerto Rico and Hawaii. When I traveled to Taiwan, I was doing dealer visits and when I did the dealer visits, the men would hold up these signs from each dealership, saying, 'Welcome, Mr. Darby.' They had no idea I was a woman. And then they would profusely apologize and say, 'Oh, I'm so sorry. I'm so sorry.' I was like, 'No, no problem.'

But what I really understood through these different experiences is that business starts at the dinner table. It's really important to get to know people; it's important to connect and bond. That was such a valuable lesson in my life: 'Just slow down and understand that it's getting to know each other, getting to trust each other. Getting to that point where you can laugh at yourself and have fun.' You build relationships through that.

Yury: What advice would you give to women who were interested in pursuing a career in STEM?

Rayner: I think there's so much opportunity in many areas that have been previously male-dominated in the past. We are so much more empowered as women. And so, I guess my advice would be to look at every single avenue and to have the confidence to go into these non-traditional areas. Because, just like my mom said, just because you're male, does not actually mean you know exactly what you're doing. We're all people and we're all in this together. Businesses need strong, successful women with confidence that can come in and lead and be a guiding light and inspiration to other women. I have a couple women technicians out in the dealerships right now. I'm mentoring them and helping them understand that they can do this, they can do this well and they can grow into anything that they need.

Darby: My lesson is: Move beyond the fear. I think everybody has fear. I think it's really important. You just have to move beyond it because it's so limiting otherwise. Live a big life, and allow your voice to be heard! I know that's a scary thing but get out there and be brave and be heard and move beyond your own fear. And celebrate the wins and just be humble enough to laugh at yourself.

Carrie Yury is Director of Research and Insights at BeyondCurious, an innovation consultancy that develops mobile-first solutions for enterprise clients, including TMS.