Does it compromise my journalistic objectivity to say that
Dr. Sanjay Gupta
is a dick? Probably, but it was my strong and continuous impression during last night's "
discussion
" with
Michael Moore
on
Larry King Live
regarding Gupta's allegations that Moore "fudged the facts" in his documentary,
Sicko
. Perhaps I was biased because I had just seen
Sicko
, and was still reeling from its terrible tales of HMOs withholding urgent medical care, bankrupting families with heavy co-pays and deductibles, and institutionalizing the practice of cutting costs through active denial of health care. Or perhaps it was because Gupta ran a report impugning Moore's fact that had one glaring factual error that he grudgingly acknowledged as an "error of transcription" — two weeks
after
the report
ran
and
re-ran
on CNN, uncorrected — despite the fact that CNN
had been emailed the correct facts by Moore's team prior to the original broadcast
.

But wait, Wolf Blitzer assures us that Gupta "is not only a doctor and neurosurgeon, but he's also an excellent, excellent journalist" — I'm probably not being fair. So let's just say that, in the case of a doctor and neurosurgeon who is also an excellent, excellent journalist but happens to impugn the credibility and accuracy of someone else with a report that is itself factually incorrect and otherwise fudged in various respects and fails to acknowledge that and then, when asked to respond to Moore's assertion that the correct fact had been sent to Gupta's team and that the fact as run was incorrect, responds "Well, you know, look, we try and look for some of the best sources that we can possibly find, because we think we owe that to our viewers" — well, I'm just going to delicately suggest that a word to describe such behavior might be "dickish."

Here's the ludicrous part: The match-up was supposed to address Moore's complaint about Gupta's "
hit piece
," as Moore calls it, giving the two the opportunity to square off on the facts. Instead, Moore found himself in the rare position of being shouted down, with King cutting him off to give Gupta the floor the event turned into a two-on-one wherein
Larry King
would interrupt Moore to give the floor to Gupta and then Gupta would refuse to let Moore break in (Moore: "That's not true." Gupta: "Give me one second, Michael. Let me just finish"). King also gave Gupta the floor after the
two
commercial
breaks
. If you
read the transcript
or
watch the vids
, you'll see: Moore cites his source for every statistic offered (and, indeed, those cites are available in detail
on his website
), yet Gupta ignores it, all of it, including Moore restating, again, that all of this was available in
this email
from June 28, 2007. See this, for example:

GUPTA: Just because you say they're wrong, I mean it doesn't make it so, Michael. I mean we try and do what you do. We try and get the best available data --

MOORE: I'm not the one saying it's wrong. President Bush says you're wrong.

But Moore
does
back it up, with World Health Organization statistics,
on his website
and in the email
sent to Gupta's producer
. Now, it's entirely legitimate for there to be different metrics and sources for this data — but where Moore makes a statement rooted in a specific and credible source, it is up to Gupta to explain why that source is incorrect if he is going to impugn Moore's facts. Nowhere does Gupta do this; and, indeed, in his
original report
, all the facts about other countries are made using vague and ill-defined criteria ("A survey of six industrialized nations found that only Canada was worse than the United States when it came to waiting for a doctor's appointment for a medical problem" — fine, but what kind of medical problem? Urgent care, like the baby with the 104 fever who was turned away from a non-HMO affiliated hospital and subsequently died? And apparently in France, "Fifteen-to-20 percent of the population will purchase services outside the system of care run by the government" — but what kind of services? Liposuction? Pyschotherapy? Again, anything urgent?). And meanwhile, Gupta keeps trying to insist that Moore is "fudging" when he says that in those countries, healthcare is free ("it's murky, Michael, at best"). I'm not sure if Gupta saw the same movie that I did, but in
Sicko
the Canadians, British and French all readily acknowledge that the money for healthcare comes from taxes — just like roads, the postal service and schools, as Moore plainly states in the film. "Free" is clearly defined in
Sicko
as not having to pay for health care because it is provided. If Gupta doesn't understand
that
, maybe he isn't a dick after all, maybe he's just a moron — or, maybe he just assumes everyone in his audience is. (Which makes him a dick.) 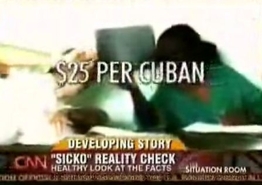 Fortunately, CNN isn't the only game in town — here at the Huffington Post, we welcomed Moore for a live chat following his appearance on Larry King Live — where he could answer questions free from interruption and provide all sorts of facts — backed up, of course, by links. Moore answered twelve questions from readers following the programme in real time, and the post already has 398 comments and counting. In the meantime, enjoy the screengrab to the right — it's of Dr. Sanjay Gupta's "transcription error" regarding the per capita cost of health care in Cuba, which ran numerous times on CNN, and which remains uncorrected on at least two transcripts from two different shows. Feh, what's a little fudging between friends?

Hat tip to Newshounds for the clips!