Mohamed Nasheed, the outspoken President of the soon-to-be-submerged Maldives, announced in Copenhagen that his country will bid for the Summer Olympics of 2024.

By then most of his island nation will be under water due to climate change. The announcement set off immediate speculation that the IOC may in fact select the Maldives to show their support for climate change action and not to be outcrazied by the Nobel Peace Prize Committee.

If Maldives wins the bid, the games will present particular challenges to the athletes. Rafael Nadal is already practicing for this new environment having mastered the clay and hard courts. 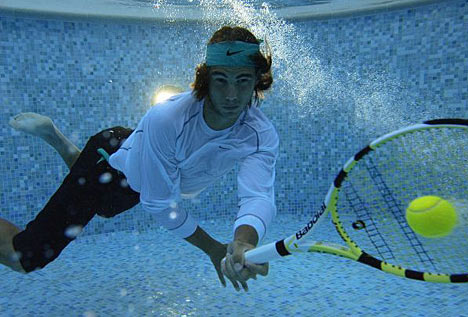 Beach Volleyball and Water Polo will be combined sports in this Underwater Olympics. Marathoners will wear wet suits and cyclists will be fitted with underwater bikes. Of course the rowers, sailors and kaykers will be right at home.

It is hoped that Maersk, the big Danish shipping line, will step up as a sponsor of the 2024 Olympics and provide a large container ship to serve as the Athlete's Village.

President Nasheed has been preparing his government for underwater life by holding the first cabinet meeting at the bottom of the lagoon. 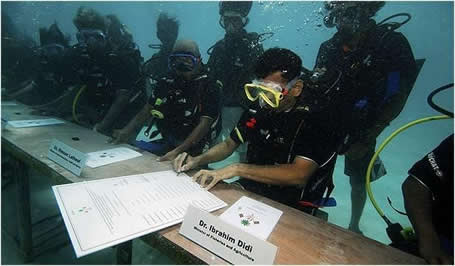 One cabinet member described the experience as very focusing - it is hard to use a blackberry during a meeting underwater.

With golf joining as an Olympic sport, it is likely that Tiger Woods will play underwater, unless he pulls a Michael Jordan and switches to another sport - co-ed underwater roller derby?

So far the IOC has not commented on the unusual bid except to say, "We are very concerned about climate change and rising oceans. While the Maldives may be an interesting location, Greenland or Antarctica may also fit the bill."