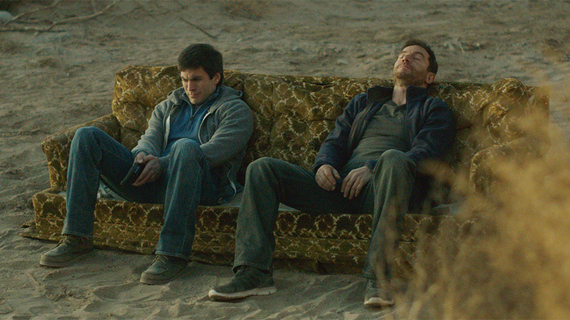 Saar Klein's family moved from Jerusalem to the Bronx in 1978 when he was 9, he says, because the American dream was something exported regularly overseas.

"Living outside the U.S., you thought there was unlimited opportunity -- that you could pick gold up off the streets, seize your opportunity and go," he says, reclining in a booth of an empty lounge of the Palace Es Saadi in Marrakech. "I don't know how much of that is true anymore."

Things are different now, he says, and his first film, opening Friday in New York as After the Fall, deals with that shift -- though that wasn't his intention. He wrote the story -- about a man hiding the loss of his job from his family and turning to armed robbery as a way to regain control -- before the 2008 financial crisis made such a scenario seem possible.

"It's funny -- when it plays in Europe, it's seen as such a political film," says Klein, whose film screened this week (under the title Things People Do) as part of the competition at the Marrakech International Film Festival. "They see it as a dialogue about the American dream."

"But I wasn't trying to say things about America. To me, it's not a political film -- it's a human film. It's about the decision to be good in a complex world. Morality is black and white -- but we live in the gray. It could have been set anywhere but it's set in America, which is where I live."

The film, which won the main prize at this year's Deauville Film Festival, is a character study of Bill (Wes Bentley), an insurance adjuster whose straight-arrow approach to life is shaken by what being jobless forces him to do.

U Turn Cameron Crowe Almost Famous Israel After The Fall