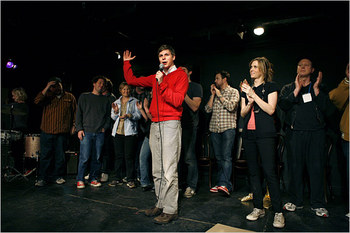 The Upright Citizens Brigade theater at 26th & 8th is no 30 Rock. It's a simple and functional theater, a step up from a black box, 150 seats on three sides of an open rectangle of floor that serves as the stage. It's not what one would call a glamorous address — it's downstairs from a Gristede's and around the corner from a taco joint — and sometimes when it rains, brown water drips from the same spot in the ceiling, right above the front-left corner of the stage. There are no white lilies and chilled bottles of Cristal in the green room; think Dunkin' Donuts boxes, a fridge and a few very low, very well-used couches. Backstage — well, there isn't really a backstage, just a narrow and dark place for people to stand, single file, before coming out through one of the two doors or a curtain, just to mix it up. Not glam by anyone's standard, but no one goes there for glam — they go there because the UCB is the premier spot for improv in New York.

These days it's hard to mention UCB without mentioning SNL, because the two are now inextricably linked, thanks to UCB co-founder and SNL regular Amy Poehler. Poehler and her co-founders started the place as a locus for performance and instruction, and it now boasts a university's worth of comedy classes and a packed nightly performance schedule, including the signature all-star Sunday night improv show which often features Poehler and her SNL cohorts like Seth Meyers, Jason Sudeikis, Rachel Dratch, Tina Fey, and Horatio Sanz. It's where Bill Hader had his audition for the show, where Andy Samberg and Chris Parnell filmed some of "Lazy Sunday," and where on a Sunday night in August, Chevy Chase could be found in the green room, chillin'.

So, if you want to understand why virtually the entire cast and crew of SNL would put on a full-length live show in this modest little spot, working their asses off as much as they ever would in Studio 8H, that's why — which is precisely what they did last night. The show, which ran almost 2 hours — with no commercial breaks, obviously — was a benefit for the SNL crew members who were laid off because of the writer's strike (the SRO crowd paid $20 apiece to get in). As Poehler said at the show's open: "No one likes laying people off, no one likes getting laid off, but everyone likes getting laid." Poehler, who used the word "family" to describe her colleagues at SNL, also made a point of including NBC in that family, thanking the network "for allowing us to do this" (the show was made up of a mixture of old and new material, with unaired sketches and jokes that Poehler assured the crowd "were never going to make it on the air" — but still presumably belonged to NBC as work-for-hire material). Poehler further thanked SNL creator Lorne Michaels "for having nothing to do with this" (contrary to a report from the New York Post's "Page Six" yesterday which claimed that Michaels was producing the show). Michaels, who celebrated his 63rd birthday yesterday, lent his support from the audience (and even laughed, according to at least two eyewitnesses). Other notable audience members included John Krasinski of "The Office," Will Arnett, Poehler's husband and guest-host Michael Cera's costar on "Arrested Development," Jack McBreyer, taking the stage Monday at UCB with the cast of "30 Rock" (including John Lutz, who does double-duty as an SNL writer) Aziz Ansari and Paul Scheer of MTV's "Human Giant," multi-Grammy songstress Norah Jones, who provided key guest-vocals during the show, and several recognizable faces from the NYC comedy community.

For those of you who could not attend — and that's virtually all of you because this was the tightest ticket in the city, for press or hangers-on or the long line of hopefuls stretching down the block — ETP has prepared a synopsis for you, retelling the evening as best we can, from Cera's monologue to musical guest Yo La Tengo to Will Forte's golden-sheathed codpiece to what Norah Jones and Fred Armisen's naked ass have in common.

Click on "Read Whole Story" below for the recap....

Okay! Here's my best rendering of the show, as funny as the next-day blog version can be. First, a description of the theater: As with most big UCB shows, the crowd was SRO with people crowding into the space between the three banks of audience chairs and along the divider at the back. It wasn't as full as I've seen the place — sometimes it ekes into sardine territory, with people sitting cross-legged at the edge of the stage and stuffed into every available nook and cranny — but that was because the crowd was largely comprised of the cast, crew and friends of SNL, plus some UCB staff and performers (not all of whom could get in). The long line of hopefuls outside were SOL, and the crisp, clipboard-wielding organizers up on the sidewalk were matter-of-fact in letting them know. It was the first time I've ever seen a bouncer at the door of the UCB.

Advertisement
It was also the first time that the audience has been invited to drink at an SNL show (well, excepting the VIPs who watch from Lorne's 9th-floor glassed-in office. Lushes) — the staff seating the audience at Studio 8H is firm on the no food or drink policy, but at the UCB's little concession stand keeps the crowd well-watered with, well, water, soda, and a much-availed of $2 Pabst. (
Update!
Apparently it was the second time, the first being at the
Mardi Gras show on Feb. 20, 1977
. This show went slightly better. Thanks to comedy nerd
Justin Purnell
for the intel.) Not that the crowd needed to be drunk to enjoy the show (or had much time, owing to the on-time 11:30 start and no-commercial no-intermission set list, which began with as much military precision as if they were going on-air. Stage manager
Gena Rositano
, all business in her professional-looking headset, counted down to "air" as a writer dashed out with a stack of cue cards for sketches that didn't make the show ("Even at UCB, they got cut," he said, depositing them with a grateful audience member). The cast members did a mock-panic run across the stage, Jon Lutz chugged two beers, Gena counted down and suddenly it was go-time. For one second, silence, and then: 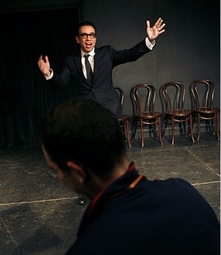 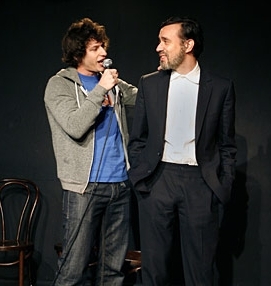 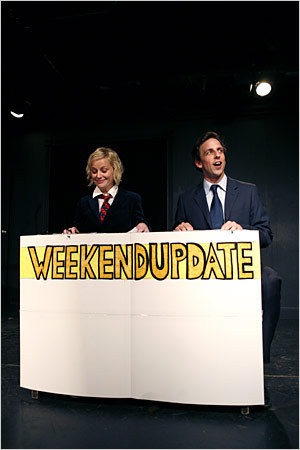 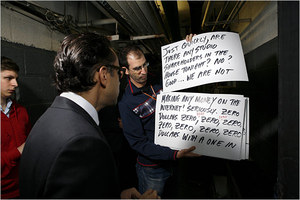 You'd think that would be it, right? (PLEASE GOD LET THIS WRITE-UP BE OVER!) Actually, it's not, and wasn't, because in addition to being a great spot for an impromptu live staging of a legendary 32-year old television show, the UCB is also a pretty damn sweet spot for a party. And that is precisely what everybody did.

Related Coverage:
`Saturday Night Live' Staged Amid Strike [AP]
With The Writers Strike Still On, It Was 'Satuday Night Dive' [NYT]
Striking Comedy By SNL [NYPost]**
Live From New York, One Last Time For Who Knows How Long [ETP] 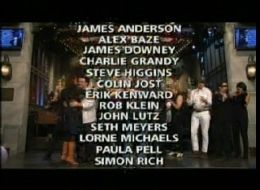 *Pics shamelessly pilfered by the NYT.
**We are pretty sure the NYP writers here did not actually attend, since their quotes are all from Kenan and the only sketches they mention were Kenan's sketches. But still. We link because we love!