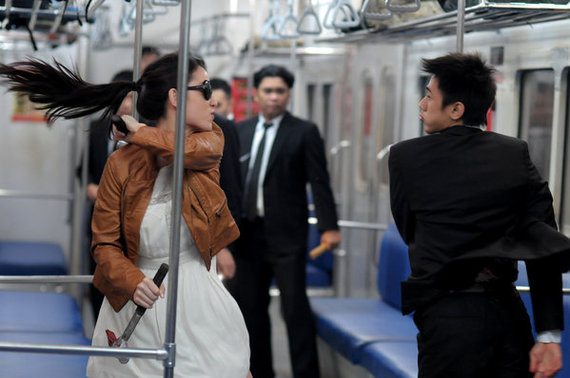 My last day at the Sundance Film Festival ended with a big bang: The Raid 2, Gareth Evans' sequel to his eye-popping 2011 action film The Raid.

And it was a good day prior to that, with a pair of mysterious films -- one a sci-fi thriller, one a marital comedy -- and most of an eye-opening documentary.

The documentary was Watchers of the Sky, Edet Belzberg's film about a small group of people devoted to furthering the thinking of Raphael Lemkin by keeping the world's attention on episodes of genocide, when the impulse is to say, "That's an internal problem in that country."

Focusing on a disparate group of people -- an attorney for the World Criminal Court who is trying to prosecute President Omar al-Bashir of Sudan; a victim of the Darfur genocide who now works for the United Nations to help refugees; an aging lawyer who was a prosecutor at the Nuremberg trials -- to examine the notion of opening people's eyes to genocide and preventing it.

It was a thoughtful, thought-provoking film, which I had to leave after 90 minutes (of an almost two-hour running time) to see The Signal. (OK, I didn't have to; I wanted to.) It paid off: This was as taut and imaginative a sci-fi tale as I've seen since District 9.

It focuses on a pair of MIT students, Nick and Jonah, driving cross-country to relocate the girlfriend of one of them to a graduate program in California. But they've also got another mission: Internet and computer geeks, they've traced the signal of a hacker who took down the MIT servers. They decide to try to bust him themselves. But, after a Blair Witch moment in a deserted desert shack, it all goes dark.

When Nick (Brenton Thwaites) wakes up, he is being held in a hospital, whose employees who tend to him while wearing haz-mat suits. A calm scientist named Damon (Laurence Fishburne) tells Nick he's had an alien encounter and may have been infected. Apparently in the early stages of multiple sclerosis, Nick finds that he now has no feeling in his legs.

But he's also unhappy at not having his questions answered. He begins plotting his escape, without knowing just exactly what he's been exposed to.

Director William Eubank keeps things tense but believable -- just unusual enough to compel you, but with the details kept in the background of what becomes a quest for answers and freedom. Fishburne seems to toggle between reassurance and menace, with his quiet but firm performance.