Can you look back on something terrible in your life that in hindsight turned out to be the best thing that ever happened to you? Was there a time when you didn't get that job you really wanted, or the love of your life broke up with you, or some minor annoyance caused you to change your plans, that later proved immensely fortunate? How many people do you know who were destroyed when their marriages ended and realized five years later that they're the happiest they've ever been?

We can't predict the future, so why be unhappy about the present?

Not getting into graduate school in my chosen field was devastating but also the reason I wound up working in the Silicon Valley at the height of the dot-com boom. Thanks, universe!

Not making it to the 1998 Alameda County Fair in time for the early Peter Frampton concert, and having to go to the late one instead, probably saved my life when a young gang-banger opened fire on the crowd in the exact spot that my friend and I planned to be had we gotten into to the 6:30 p.m. show instead of the 8 p.m. one. Whew, universe -- I owe you one!

We don't often get such clear evidence of how the major setbacks or minor annoyances that change our plans may be gifts, so here's a trick -- tell yourself they are anyway. Even if the outcome isn't about you, see it as your way of improving the planet for the rest of us, and let that make you happy.

Two years ago, on Halloween, I ran to the grocery store in the early afternoon to get more candy and on the way home was stuck in ridiculous traffic on Sunset Blvd. The turn for my street is unregulated (no light or stop sign for the vehicles on Sunset), but traffic was so heavy that cars in the oncoming lanes had stopped to keep the intersection clear.

The driver in lane one waved for me to go, but I hesitated until lane two came to a complete stop and that driver waved as well. Then, I started inching across to make my left, in case a car might be zooming up the parking lane, when BANG! A motorcycle that was threading between the stopped lanes hit the side of my car.

Because lane-splitting is legal in California and I was making a left turn, and despite the fact that the other driver admitted that he was going more than 25 miles an hour and had passed at least five stopped cars on each side of him, the insurance company determined that I was partially at fault. You can see where he hit me and decide for yourself: 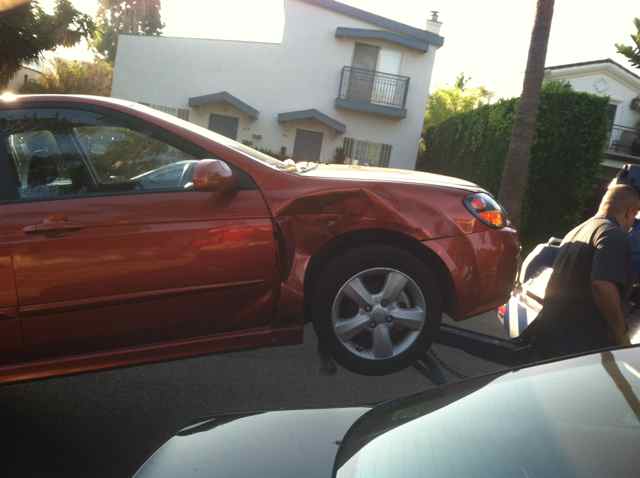 At one point in my life, this would have made me really angry, for weeks, but not anymore. Not now that I understand how the bad thing happening today may be the best thing that happens in the long run.

I am not at all unhappy about that young man hitting my car that day, even though I had to pay for it. In fact, I'm really quite happy about it. No one was hurt, all it cost me was money, and I truly believe that I was there to run interference.

I was making a left turn in that spot at that moment to stop the motorcyclist, a 28-year-old actor on his way to an audition, from blowing past the line of stopped cars at the next intersection, or the one after that -- the one where the long line of cars just might have been stopped for small people crossing the street to trick or treat in the next neighborhood. Yes, I was terribly shaken up by seeing a grown man bounce across the hood of my little hatchback, but at least it wasn't a 7-year-old in a Princess Leia costume, which could have easily happened somewhere else on his careless route.

I don't know if hitting my car changed the way that man drives, and I never will, but I do know that writing about it might make someone slow down a little on the way home tonight, or check for pedestrians before turning right on red, or decide that missing the bus isn't the end of the world, and could open up all kinds of happiness possibilities.

The future is uncertain, so be happy now, regardless of your bad day, week or year. Next time you can't find a parking spot, or miss a plane, or have your plans hindered, before you get mad, remember that this could be the best thing that ever happens to you, or it could be your way of stopping the bad thing from happening to someone else. You might never know for sure, and it could create all kinds of disasters instead, but keeping the possibility of endless upside in mind will always make you happy.

To read more, you can visit Valerie Alexander's website, Speak Happiness, and follow Speak Happiness on Facebook and Twitter. For more detailed instruction in achieving lasting, permanent happiness, you can get "Happiness as a Second Language" on Amazon, and for added amusement, please check out the Happiest Book Trailer Ever.