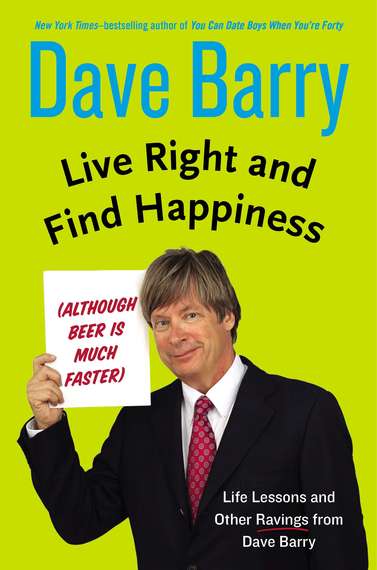 Dave Barry is a Pulitzer Prize-winning humorist and New York Times bestselling author of Insane City and You Can Date Boys When You're Forty. From 1983 to 2005, he wrote a nationally syndicated humor column for The Miami Herald.

In Live Right and Find Happiness (Although Beer is Much Faster), Dave articulates certain life truths to his new grandson and to his daughter Sophie, who will be getting her learner's permit this year ("So you're about to start driving! How exciting! I'm going to kill myself"). Dave comments on contemporary life, touching upon both trivial and serious subjects.

In the Introduction to Live Right and Find Happiness, you talk about happy, carefree, young people. When you drive your daughter and her friends to soccer practice, you're privy to the discussions of 15-year old girls; and you list their top 10 concerns. What are they?
Number One is Boys. Number Two is the hideous, totally unwarranted cruelty of high-school teachers. Three is what this one boy did in this class, OMG. Number Four is about some video on some Internet thing that's HILARIOUS. Five is Hair. Numbers six through ten are Boys. If I continued the list with numbers eleven through nine-hundred, they would all be Boys.

In the book, you comment tellingly about today's young parents. Will you share some of that with us?
I was talking about the difference between my parents -- the Greatest Generation, as they're called -- and my generation of parents -- the baby-boomers' generation. We invented the verb parenting. My parents didn't view it as a full-time occupation. It's not that they didn't love us, they just didn't obsess over our lives the way we do over our kids' lives. I think they had a lot more fun than we do as parents. We're supposed to be the sex, drugs and rock-and-roll generation; and we were, for a while. But, when we had kids, we became insufferable. We started researching all the things that could possibly go wrong, and how to correct them. We wanted to make sure our kids' lives were absolutely perfect. I think we lost our sense of spontaneity and fun, which my parents had.

When I was a kid, my parents had these great parties. They did things we now consider to be insane, dangerous or criminal. They drank, they smoked and drove cars while drinking and smoking. They didn't put us in $973 car seats. They just lived. As I've eased into decrepitude, I've had the gradual realization I didn't have as much fun raising my kids as my parents did raising me. And, we're bringing up a generation of kids who depend on us to guide them, control their lives and remove all obstacles in their paths. It just seems something has gone wrong.

In the book, there's an interesting anecdote about what you once did to Dick Cheney. Tell us about that.
When he was the Secretary of Defense, we were both at a social function at the Washington Post. I introduced myself. We shook hands. Then, by mistake, I did it again. We both realized we'd already done that. After a few drinks, I thought it would be funny if I did it again. So, I went out of my way three or four more times, to bump into him and introduce myself. I'm sure he wished he could call a sniper at that point.

Or maybe he'd invite you to go quail hunting.
(Laughter). Yes! My prank was much funnier to the person who'd been drinking than to the other person.

That's always true, isn't it?
Yes, it is. Which is why we should all drink more.

You've been quoted as saying, "What I look forward to is continued immaturity followed by death." Will you explain that?
In high school, I was the class clown. I got my classmates to laugh. I even got the teachers to laugh, but was often told by them, 'That's very funny, but you cannot joke your way through life.' Now that I'm older, I realize that's basically what I did do. I joked my way through life. I never really had a responsible job. And, now it's too late. (Laughter). I'm basically still writing booger jokes, way past the time when it would be appropriate.

You said you've essentially joked your way through life. Any regrets?
No. (Laughter). I just can't believe it worked out this way. At some point, I think the grown-up police should have come to my door and said, 'Okay, enough of this. You can't go through life setting fire to a Barbie doll's underpants and writing about it. You have to do something more significant.' But it turns out, I didn't.

Has humor been a way of finessing the system, of copping out?
Absolutely. I think this is true about most humorists, including stand-up comics. It's a way of getting people to like you without giving too much of yourself away. You're hiding behind humor, usually because you're insecure about yourself. You don't think people would really like you if you didn't make them laugh. So you use humor to get by, to avoid being serious about anything and in my case, to avoid being held upside-down over the toilet by the larger, stronger boys.

You mentioned in the book having met David Beckham and having felt diminished by his good looks and charisma.
Yes, I hate him. It's personal. (Laughter).

So, like many kids, you were insecure?
Yes, but we weren't all insecure. There were kids who were attractive and athletic. I was not that kid. My high school photograph is in this book. It's a hideous thing to behold. And that was the best I could look. That wasn't just a bad day. That was me trying to look good. I was just this incredible dweeb wearing Soviet Union-era eyeglasses. And my hair! It was awful. My dad was a Presbyterian minister, and cut my hair. He was good at what he did, but was a terrible barber.

You're a new grandfather. What are some of your grandfatherly concerns?
I wrote a letter to my grandson, Dylan Barry. He's now nine months old. I thought I'd pass on whatever wisdom I've learned. When I sat down, I couldn't think of that much wisdom. So, I ended up pointing this out to him: You don't need to refrigerate catsup and mustard. It's a mistake. I hate cold catsup on a hot hamburger. That was my main piece of wisdom, along with some other stuff, which basically boils down to: Don't be a jerk.

Have you ever been tempted to write outside the genre of humor?
I wrote a couple of serious essays which were well-received. They were written after something pretty bad happened -- after my dad died, and after my mom committed suicide. I wrote an essay about that. At the time, I was pretty wrecked. When people asked if I would write more essays like that, my reaction was, 'I don't want to. I wrote those things because I was really down. I needed to think about it and get it out. Writing is how I did that.' So, I stay with humor.

As times have changed over the decades, has it affected your humor?
I don't think my humor has changed. My humor is pretty much silly and observational. The world of comedy has changed, and to some people, I'm from the Civil War-era. I'm comfortable with my kind of humor. I write about relationships between men and women, and parents and their kids. These themes are timeless.

The accoutrements have changed. In the book, you mentioned the Internet.
Yes, this Internet thing is really catching on. I may include it in a column one of these days.

Is humor your style at home?
Not really. If you were a magician you would practice your tricks, but you wouldn't go around the house making spoons disappear. (Laughter). I do make my wife and daughter laugh sometimes, but I don't try to entertain them. I stopped a long time ago needing to prove I'm funny. I can't help being insufferably handsome, however (Laughter). There's nothing I can do about that. My raw sexuality oozes out of me at all times and I cannot stop it.

What's coming next for Dave Barry?
A book tour, of course. (Laughter). I plan to write a book about Florida, which is the weirdest place on earth. You know, it's where cars are driven by headless people, and all you see are hands gripping the wheel. Or even worse, there are couples where the man drives, but the woman sees. (Laughter).

You live in Coral Gables, Florida. Do you worry about climate change and the water level rising?
Not at all. We're inland, and eventually, we'll be beachfront. I see nothing but rising property values. (Laughter).

Congratulations on penning Live Right and Find Happiness, (Although Beer is Much Faster), a really funny and quintessential guide to dealing with life's most vexing problems.