Because the reality is that they really don't.

When you're overweight, it can be a very uncomfortable thing to move through the public spaces of your life. Unlike other types of qualities you may not like about yourself, being overweight is one that is plainly visible to everyone. So you tend to feel very exposed and vulnerable in situations where you feel "on display."

Certainly, it's possible to feel this way as a non-overweight person. I'm not claiming overweight people corner the market on these feelings--if you have acne, a bad scar, skin discoloration, a missing or deformed limb, or some other sort of physical condition that causes you to appear differently to those around you, then you can probably identify with this sense of discomfort and the associated internal dialogue that goes along with it.

I can't speak from experience on other types of discomfort with appearance, so I'll allow you to substitute your own version of inner being nasty zingers for the ones I'm listing here, as needed. These are the things that I once imagined others were thinking about me, and still occasionally do, moving through the public spaces of my life.

Wow, she is fat.
She is a really, really, big girl.
Can you believe she's wearing those pants?
That skirt is showing way too much of her HUMUNGOUS thighs.
Her fat rolls are hanging out over her tights, what a slob!
Who told her that outfit looked GOOD on her?
Who does she think she is?
Nobody should be allowed to walk out of the house like that.
Really, you're eating that? When you look the way that you do?
Don't you think you should leave that stuff for the skinny people, who can afford to eat it?
What is WRONG with her? Why can't she control herself?
Walk away from the dessert table, Honey.
She is disgusting.
I can't even look at that.

This list represents the types of thoughts I was CONVINCED everyone around me was thinking when they looked at me for most of my life. It wasn't just a passive thing--these thoughts played on loop in my head in a way that profoundly affected my behavior and my feelings about myself. I would take different routes through the dining hall in college in order to avoid being seen by certain groups of people. I would hide my eating from my coworkers and roommates. I would deny myself meal breaks and proper nutrition to avoid having to be visible to those around me.

But then one day, I realized something. I was deeply immersed in my daily inner monologue about what to eat for lunch. Should I get up and take a break to get lunch at all? What would my coworkers think about me based on my food choices? And about how I wanted to find an empty call room at the office to eat in because I was uncomfortable with people watching me eat. A little voice inside, which speaks up occasionally when I'm on the verge of completely losing touch with reality, piped in:

"You need to get over yourself. They're way too busy worrying about themselves to care about what you are or aren't eating, or how you're eating it and when. So you don't need to worry so much about what they're going to think. Nobody really cares. And if they do, eff them."

Nobody cares! What a liberating realization!

Nobody is actually staring at you, and if they are it isn't because they're deeply invested in your situation. People don't make hurtful judgments because of how deeply they care. At least not passive, shallow judgments like the ones enumerated above. If they are actually saying and thinking thoughts like that at all, it's because they have dehumanized the subject and literally don't care at all how or if those thoughts, words, and statements impact that "thing."

But it's more likely that no one is actually saying or thinking anything negative. If it seems like someone is mean mugging you in the cafeteria line, they are probably thinking something like, "Wow, blue sweater," (because they happen to like blue), or "I wish I had some Peanut M&M's right now," (because you're standing in front of the candy display next to the register), or "I forgot to send that email to Karen" (and they aren't really looking at you, but through you).

All of this is great news for you! One of the big drawbacks to not being comfortable in your body, whatever state it happens to be in, is that you spend a lot more time drawn into your own neurosis than you do operating in the realm of reality. When your inner being is a mall cop on a power trip that is ready to pull the trigger at the slightest indication of danger, real or imagined, you become a lot less effective at living to your full potential and spend a lot of time fighting unseen (and sometimes non-existent) enemies.

If you can really face your insecurities and acknowledge that you're a lot better off in the world than you sometimes allow yourself to believe, you begin to free up all of the energy you used to expend caring about what others think and redirect that energy into doing great work, whatever that happens to be for you. When I stopped dodging the voices in my head, I was able to recognize opportunity's knock. As I began to answer those knocks, things cracked open for me in major ways, creatively, financially, romantically, and intellectually. 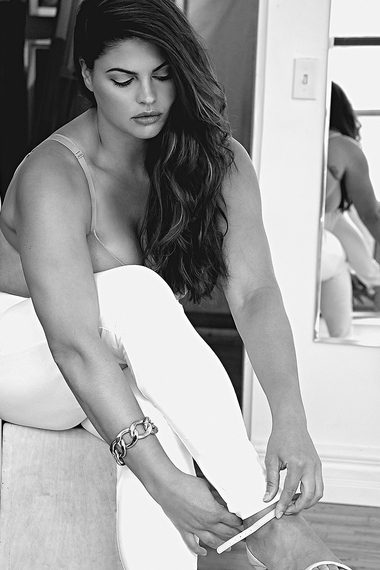 This photo, taken by Justin Clynes with hair and make-up by Lauren O'Leary, was taken when I was completely unposed, changing outfits between looks--further proof that sometimes the best things befall you when you aren't trying to impress anyone!

So go ahead. Have the side of fries you're secretly jonesing for, wear the crop top, sport your prosthetic leg in a pair of cargo shorts, or skip the mineral make-up today. Just worry about doing amazing things instead of caring if other people are going to judge your choices. In those moments when you start to feel self-conscious, remind yourself that no one really gives a flip, so why not just be you?