12:43AM
One more thing... MSNBC calls Alaska for Obama. And this from Markos:

Obama will likely win the battle of the states 14-10. He actually managed to make California unimportant.

12:37AM
Okay, that's all for tonight. Thanks everyone! MSNBC is calling Obama the "apparent winner" of Missouri.

12:30AM
MSNBC reports that the Romney people will be having some "frank discussions" tomorrow.

12:24AM
Obama is going to win Missouri, again defying expectations and polls. Even with CA going decisively for Clinton, this is still a winning night for Obama based on the polling and expectations leading into the week. Obama won several surprise victories while Senator Clinton lost some states she was winning in the polls -- CT, MO and MN. Here's the thing... Clinton is way behind in cash. Obama can maintain his present clip for much longer and could potentially spend the Clintons into the ground.

12:16AM
CNN says California is still competitive based on their data. For what it's worth, their delegate count for CA is 22 Clinton, 12 Obama.

12:12AM
MSNBC calls California for Senator Clinton. The present gap in votes is shocking. It's 55-33 right now.

12:05AM
Whichever wire service called Missouri for Clinton was premature. Obama is now leading in Missouri.

11:59PM
Another amazing address by Senator Obama. By the way, MSNBC hasn't made a call on Missouri.

I became involved in the NJ campaign after one of my friends told me that his extended Italian family were voting for Hillary cause she was preferable to the black guy. Their votes were being driven by race. We turned some of them around, but with others the racial enmity prevented any rational discussion.

11:52PM
Missouri goes for Clinton and Colorado goes for Obama.

11:42PM
McCain is talking and Obama is almost ready to talk. Whoa. MSNBC might... cut away...? And Olbermann wraps it and MSNBC goes to Obama.

11:29PM
Delegate count by request... Clinton 170, Obama 128 according to NBC. And as for the superdelegates, they're not even worth paying attention to. The only reason they exist is so the party can maintain some kind of leverage in terms of who wins the nomination. ALL of the superdelegates could be pledged to one or the other candidate and it wouldn't matter. Whoever 1) lasts the longest, 2) doesn't run out of cash, 3) doesn't drop out, 4) keeps the lead in popular vote/caucus delegates... will win the superdelegate count. The superdelegates will shift to whoever the presumptive nominee becomes. AND... this will not go to the convention.

Now the seldom discussed "Super Monsters Of Rock Delegates" are a different story. No-one knows about them but they'll crush us all with their super-ness.

11:20PM
CNN's Super Rad Explosion Of Politics And Happy Greatness, Yessiree! says that according to their exit poll, Obama is winning the white and black vote in California. Clinton is winning the Latino and Asian vote.

11:18PM
Clinton appears to be leading in CA, but it's too close to call. Obama leading in Colorado.

11:02PM
The biggest shocker of the night! McCain wins Arizona! Break out the lawyer jokes!
Obama wins Minnesota. Olbermann says Obama was 7 points down in MN six days ago.

Hillary has always been ahead in Massachusetts. She was 11 points ahead only 2 days ago. For the pundits - especially Chris Matthews - to keep trumpeting Hillary's victory in Massachusetts as an "upset" is absurd. Yes, she won - and kudos to her for that. But it was expected for the past 14 months. It wasn't an upset.

10:36PM
The Romney Unit is talking on the TV. If you listen carefully, when he gestures, he makes that C-3PO servo motor sound.

10:26PM
Terry McAuliffe on MSNBC. I so hope that Clinton wins the nomination so we can observe the cavalcade of the same old Democratic operatives.

10:22PM
It's looking more and more like McCain and Huckabee are going to team up as a unified front with the Romney Unit not lasting much longer. But it looks as if Obama and Clinton will continue forward, still fighting despite the increasingly congealing Republicans. Even though I strongly believe that the Democrats won't take this to the convention (it will never happen -- NEVER), for every week in which the Obama and Clinton camps are bitterly fighting, the Republicans will appear comparatively more civilized. That's not good.

10:13PM
Huckabee and Miss Teasdale from Duck Soup making with the talk and humorous quips.

10:05PM
Obama wins Utah. Obama is leading significantly in Minnesota and Idaho. Idaho! Pedro and Summer should be conceding at any moment.

9:58PM
CNN just ran a commercial in which a guy eating breakfast and a hummingbird are both killed by an exploding meth lab. I'm not making this up.

Huckabeer wins Alabama and Arkansas. The Romney Unit has only won MA tonight.

9:48PM
On a serious note...MSNBC reporting wicked tornadoes in TN. People trapped in a dorm. One fatality.

9:37PM
Scarborough says: a tie tonight goes to Obama. Everyone send some good vibes to Rachel Maddow for putting up with Joe and Pat Buchananan.

9:28PM
MSNBC delegate count for tonight: Obama 46, Clinton 112. Obama is leading in Napoleon Dynamite's home state of Idaho. The Republicans have also won some delegates and votes -- Huckabee leading in Missouri. The concensus is that McCain, though winning, is suffering from a weaker showing than expected.

9:25PM
Request from the comments... Something for Obama supporters... Obama wins Alabama 64-34!

9:21PM
MSNBC calls NJ for Clinton. Exit polls were wrong on this one too.

9:20PM
The Democrats will not go all the way to the convention. The party will never let it happen -- unless the GOP does as well and that won't happen. McCain wins NY.

9:15PM
CNN hasn't called MA for Clinton yet. Wolf saying that they're waiting for votes from Boston. I can't imagine there are enough votes to make a difference, but then again I'm not a member of the CNN Awesomest Political Bottlerocket Of Ice Cream And Delegates Team 3000.

9:12PM
The exit polls were wrong on Obama in MA. The Clintons are calling MA "the biggest win of the night." I thought the Kennedys basically split three for Obama, three for Clinton -- and I thought Clinton was leading in the MA polls. But okay.

9:01PM
Who selects the little photos of the candidates? The MSNBC Huckabee photo looks like a wacky boardwalk caricature of Kevin Spacey.

8:57PM
Clinton wins big in MA. Someone on the MSNBC crew yelled "oh shit" on the way into the break. I don't think these items are related.

8:50PM
So far the exit polls are matching the projected results on the Democratic side. However, everything can go wrong at any moment.

8:46PM
FOX News is showing an exit poll graphic that looks like a Super Mario level that takes place on a psychadelic lazy-susan.

8:38PM
Karl Rove on FNC with Chris Wallace. Nothing to see here except forehead.

8:25PM
Obama appears to be leading in CT and Clinton is leading in MA. Someone from The Greatest Goddamn Election CNN Explosion Of Politics And Turtles just spent four minutes saying something that was entirely obliterated by the loudness of cheering Obama people.

8:19PM
Okay so MSNBC projects TN for Clinton. Not sure what happened just then. Matthews and Olbermann were temporarily baffled by something.

8:14PM
MSNBC's too close to call list for the Democrats: TN, NJ, CT. Obama leading TN 46-44, but too close as well. Olbermann amazed at Obama's showing in TN.

7:59PM
CNN has Huckabee leading McCain by a few hundred votes in GA.

7:56PM
On CNN, David Gergen is extra turtly tonight -- you know, for the Turtle Club. Turtle! (I swear I'm not drinking. Yet.)

7:51PM
Rachel Maddow seems really sad sitting next to Pat Buchananan who, by the way, just said that President Clinton will be blamed for Obama's "landslide in Georgia."

7:49PM
Chris Matthews: the Democrats are female. Something about a "socio-metric overlay."

7:43PM
This is really superficial but flipping around tonight, I'm noticing that MSNBC's production values are about a gazillion times shinier than FOX News which appears dull and dark in comparison. MSNBC isn't paying me to say that. Meanwhile, Georgia is too close to call for the Republicans. McCain and Huckawacky are separated by a hundred votes or so.

7:28PM
From the second wave of exit polls... Obama leading in GA, AL, CT, IL, DE, MA, MO, NJ, AZ, NM, UT. Clinton leading in TN, NY, AR, OK, CA. Don't expect me to be able to keep up with the exits, but I'll do my best. Besides, we don't know what they ultimately mean in terms of delegates which involves pundit heads exploding. 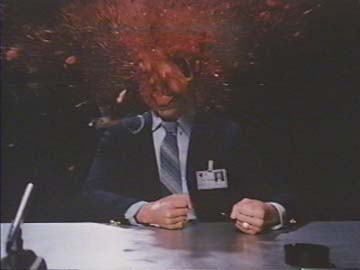 7:23PM
This morning CNN had some voters rigged up to brain scanner electrodes. Now, whenever they hear Lou Dobbs' voice, the voters tackle Wolf Blitzer.

7:20PM
Let's get this thing started. Obama wins Georgia. We know this. Obama gets 43% of the non-black vote which is significant.

/joke/ Note to President Clinton -- Jesse Jackson won Georgia in 1988. Haha. You can use that. /joke/