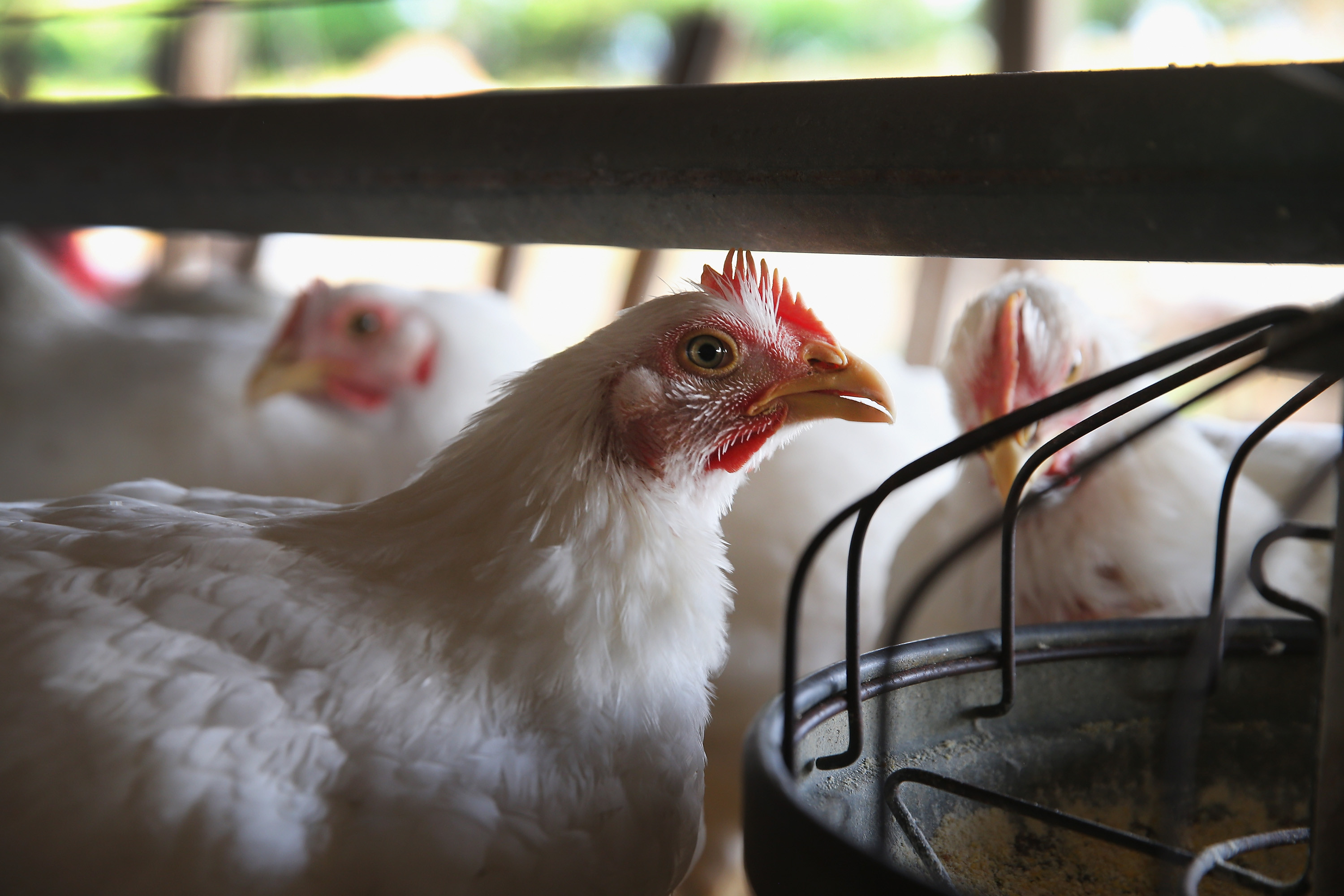 Each year, at least 23,000 Americans die from drug-resistant infections carried by so-called superbugs -- pathogens that were once easily treatable but that can now withstand modern medicine's full arsenal of antibiotics. And if recent forecasts are correct, it could get a lot worse.

Superbugs could in fact surpass cancer as a leading cause of death by 2050, according to the World Health Organization. The WHO and the U.S. Centers for Disease Control and Prevention, along with a number of leading scientists, have warned that the misuse and overuse of antibiotics in both humans and animals is the driving force behind this threat to public health.

The U.S. agriculture industry currently uses about three-fourths of the nation's supply of the drugs, mostly in the name of promoting growth and preventing disease -- and experts suggest this can result in real consequences for human health. Animal antibiotics, and the extra-strong bacteria that often accompany them, can reach people via any number of pathways.

"Regardless of how much or how little food production has contributed to the problem, we need to rethink how we use antibiotics across society," said Matthew Koci, a poultry science expert at North Carolina State University.

To that end, the White House, the U.S. Food and Drug Administration and Walmart have all independently made statements in the past month to the effect that the animals we eat need to be weaned off their routine low doses of antibiotics. The push continued last Tuesday, when advocacy groups sent a letter to the world's largest fast-food chain, Subway, asking the company to join the growing list of major buyers and producers that have already called for major cutbacks in antibiotic use -- a list that includes Perdue Farms, Smithfield, McDonald's and Carl's Jr. And on Thursday, Consumer Reports added further pressure with the launch of an investigative series on the misuse of antibiotics. 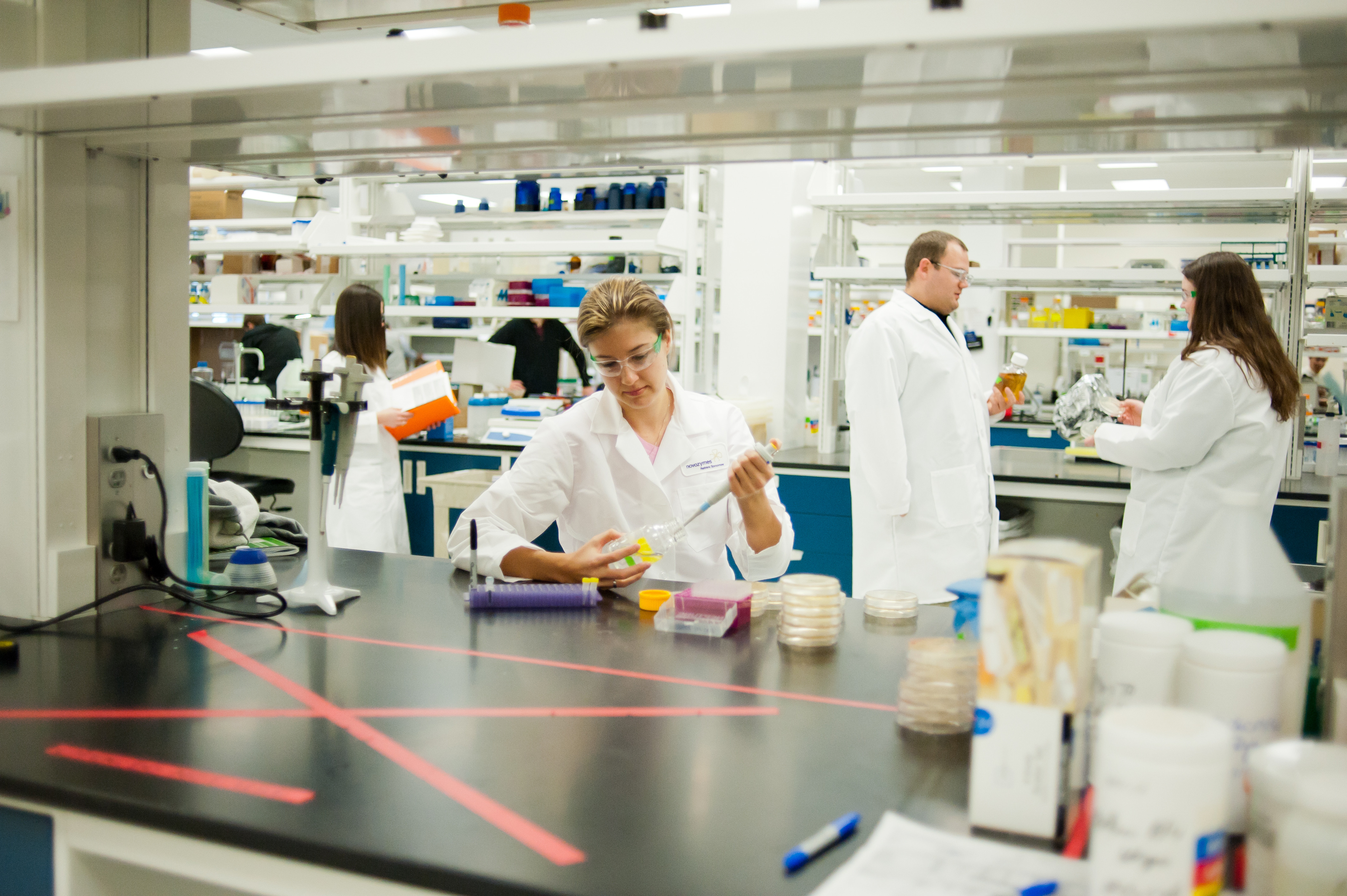 As some researchers contemplate the end of antibiotics, others are taking up the question of what we might use to replace them.

"If we're going to take away one of the tools farmers have relied on for over 50 years," said Koci, "then we need to figure out alternative methods to help them continue to produce the food the rest of us take for granted."

One possibility could involve probiotics, beneficial microbes that boost the health of their host, starting with the gut. It's thought that probiotics might be able to do the two most common jobs of livestock antibiotics: helping animals grow bigger, and helping them avoid disease. In late May, the Danish biotechnology company Novozymes announced a partnership to develop a new probiotic that it says could help transform poultry farming.

Can We Live Without It?

Predictably, a lot of businesses that depend on livestock are against the idea of phasing out antibiotics. Sanderson Farms, the nation's third largest poultry producer, is one of the holdouts. "Frankly, after doing our homework, we do not plan to withdraw antibiotics from our program," said Joe Sanderson Jr., chairman and CEO of the company, during a May 12 presentation. The company declined to comment to The Huffington Post.

"There are companies out there representing a view that I would say is almost parallel with coal companies who say, 'We can't do away with coal,'" said Simon Shane, a poultry veterinarian and professor at North Carolina State University.

But we pretty much can live without farm antibiotics, Shane went on -- at least, in cases where they're not medically necessary for the animals. "We have alternatives," he said.

For evidence, look no further than Denmark. In 1999, the country -- which happens to be the world's leading exporter of pork -- outlawed all nontherapeutic uses of antibiotics in pigs, thanks largely to the work of a young veterinarian named Frank Aarestrup. Aarestrup had blown the whistle after seeing a connection between the use of antibiotics and the spread of highly resistant bacteria. 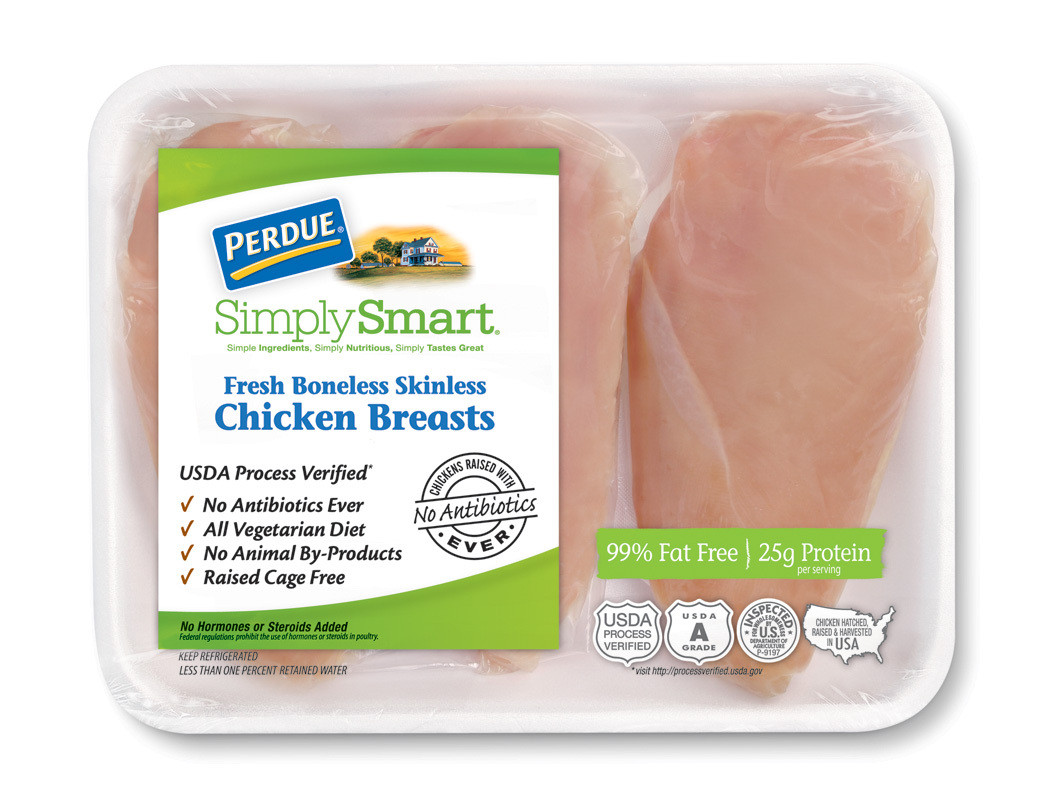 Perdue has been transitioning to antibiotic-free poultry. (Perdue)

"It simply was an unnecessary use," said Aarestrup, now a veterinarian at the Technical University in Denmark, in an email to HuffPost. Earlier this month, he published a review of the connection between antibiotic use in livestock and the rise of methicillin-resistant Staphylococcus aureus and other superbugs in humans. "It thus might seem strange that most countries and farmers continue with the procedure that could be seen as both unnecessary or even having negative consequences," Aarestrup wrote in that review. (For an example of negative consequences, see here.)

Bruce Stewart-Brown, senior vice president of food safety and quality at Perdue Farms, which began weaning its flocks off antibiotics over a decade ago, pointed to his company's ability to "raise chickens effectively and safely" without antibiotics. Only about 5 percent of Perdue's chickens now receive medically important antibiotics, or drugs that are critical in combating human infections. For the most part, said Stewart-Brown, Perdue producers are now using probiotics and other alternatives.

The Guts Of The Matter

Guts teem with bacteria. It's just what they do -- cow guts, chicken guts, pig guts, your guts, my guts. (A swine's innards can host up to 1,000 different species.) An ecosystem made up of microbes is known as a microbiome, and in the microbiome of an animal's stomach and intestines, the balance of "good" and "bad" bugs can be vitally important to the animal's health -- just as it is in our own bodies. Generally, the good guys keep the bad guys in check.

Antibiotics, though, take a slash-and-burn approach, killing good bacteria in the process of destroying the bad. Drug-resistant bugs thrive in this scenario. 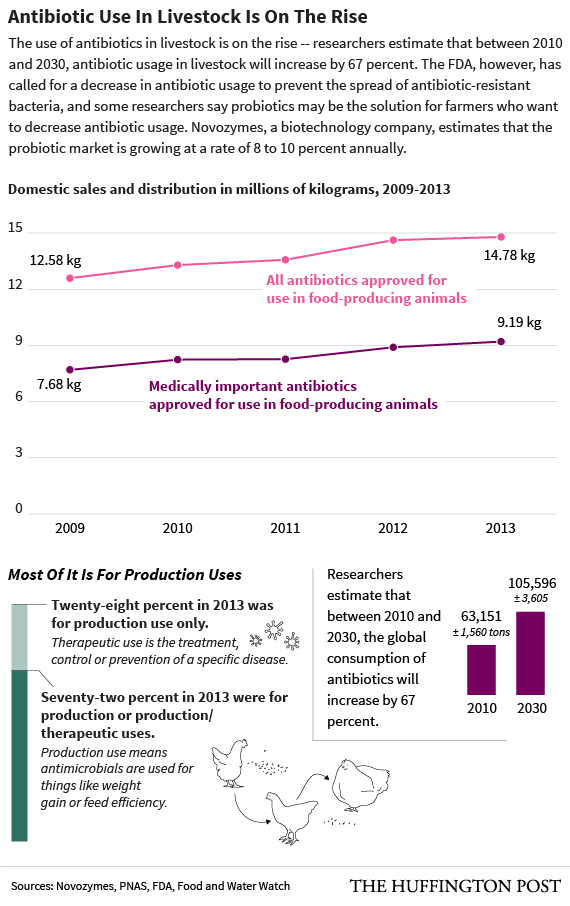 Probiotics, by contrast, support digestive and immune system health by boosting the body's beneficial microorganisms, rather than stripping them. "All of these bacteria that live in the intestine have evolved a beneficial relationship with the host," said Andrew Gewirtz, an expert in the role of bacteria in health at Georgia State University. "When you disturb that relationship with the use of antibiotics, you do so at a detriment to the host's health."

We know this can be the case in humans. For example, cases of Clostridium difficile infections -- and subsequent incidents of life-threatening sepsis -- are on the rise among hospitalized patients, whose gut microbiomes are often left perturbed and therefore susceptible after antibiotic treatment.

Meanwhile, disturbances to the ecosystem of an animal's gut may not only threaten human health by speeding the spread of antibiotic-resistant superbugs -- they may also affect an animal's susceptibility to viruses. This includes zoonotic diseases, or illnesses that pass from animals to people, like bird flu and SARS.

"It opens the door to other illnesses that could affect the animal," said Carmen Cordova, a microbiologist with the Natural Resources Defense Council. "The less healthy an animal's gut, the more likely they are to get sick."

Koci, the poultry science expert at NC State, has done research that suggests probiotics may prove powerful against viral invaders. "When we give probiotics, we see changes in the activity and function of immune cells," he said of his recent work on broiler chickens. Still, he cautioned against making too much of the findings: "Just like in humans, we need to figure out who are the right players -- who needs to be where and when."

The Promise Of Probiotics

As more food producers, including Foster Farms and Tyson Foods, seek to follow Perdue's example in making the switch from antibiotics to something new, and as the U.S. government attempts to make it harder for producers to overuse antibiotics, some biotechnology companies are seeing a potentially lucrative niche. Novozymes, the Danish company, hopes to reach market with its new poultry probiotic within the next 12 months. 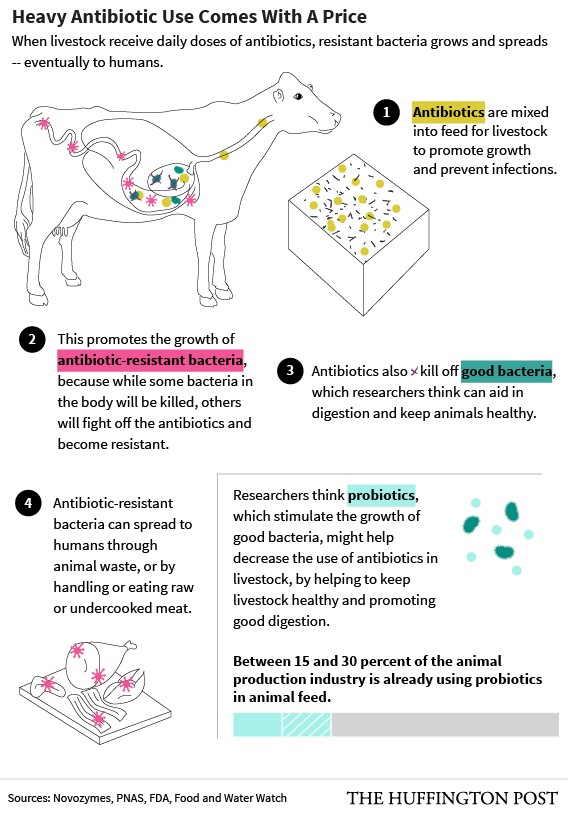 A probiotic -- especially when combined with so-called prebiotics, or substances that act as food for probiotics -- can help crowd out the bad bugs in a microbiome, explained Helle Warrer Poulsen, vice president of animal health and nutrition for Novozymes.

"By adding good bacteria to the gut of an animal, that animal can use more of its energy to grow and less to fight bad bacteria," she said. "It's a good alternative to enable the phasing-out of antibiotic use for growth promotion."

The bacteria that are used as probiotic organisms may have another advantage, according to researchers, in that they can multiply more efficiently than antibiotic-resistant bugs, which have to use extra energy to maintain their resistance rather than saving it for reproduction.

Poulsen emphasized that Novozymes is not looking to do away with antibiotics that are used to treat sick animals. She also noted that the probiotic-and-prebiotic alternative is just one option among many. Vaccines and novel housing systems may also be part of that toolbox.

Still, some experts caution that the promise of probiotics, whether for humans or for animals, has gotten exaggerated. "I think this whole idea, which is promoted by commercial interest, has come way before it's ready for primetime," said Ellen Silbergeld, a professor at the Johns Hopkins Bloomberg School of Public Health. "We tend to just want to find a magic pill that is going to take care of it all."

"We don't know what constitutes the healthy microbiome," Silbergeld went on. "We need to figure that out first."

Koci, too, said that scientists are "still at the very beginning stages of figuring out how to fully tap the power of what is going on inside the microbiome." Some probiotic products on the market are "snake oil," he said, while others only work when matched to the right situation.

Of course, the same might be said of growth-promoting antibiotics. A study conducted by Perdue in the late 1990s showed little evidence that the antibiotics of the day lived up to their advertised benefits. One could be forgiven for asking: Do we even need a replacement for low-dose antibiotics as they're used today?

If Denmark is any indication, the answer may be no. "No specific measures were needed," said Aarestrup, referring to the country's move away from using antibiotics in pigs. "However, as always, you have to take care of your animals."