In the wake of the tragic attacks in Paris and Beirut, Islamophobic rhetoric and hate crimes have already begun to surge. Across the country, we have politicians making calls to suspend refugee resettlement, hate crimes and mosque arsons have already begun to intensify. While these events remain relatively isolated, the vicious attacks of ISIS have led to an intensification of general anti-Muslim sentiment throughout the West.

Underlying the rise in Islamophobia is a genuine concern regarding how to combat ISIS beyond militarily. We're once again seeing a flurry of op-ed's questioning the extent to which ISIS is representative of mainstream Islam. People are desperately looking to make sense of what's happening. How exactly is ISIS abusing the Islamic texts? What can Muslims do to defeat this wicked ideology? Should Muslims condemn ISIS? How much support is there for ISIS on behalf of everyday Muslims in the west? What can American Muslims do to combat ISIS?

These questions will be explored this Thursday November 19th at Georgetown University in a panel featuring some of the foremost experts on Islam in the West such as Dr. John Esposito, University Professor at Georgetown University and Director of the newly launched Bridge Initiative, a center dedicated to the dissemination of research on Islamophobia. Dalia Mogahed, author of Who Speaks for Islam? What a Billion Muslims Really Think, Linda Sarsour, a prominent Muslim American media spokesperson and the co-founder of the new Muslim social media platform MPower Change, Tarek El-Messidi, who launched Feed Their Legacy in response to the senseless murder of three Muslims in North Carolina, and Saafir Rabb, a prominent Imam and African American Muslim leader. Alex Kronemer, Executive Producer of Unity Productions Foundation will moderate the panel.

The event will feature the premiere of a new 11-minute film, American Muslims: Facts vs. Fiction produced by Unity Productions Foundation which presents groundbreaking research from public opinion surveys and studies of the American Muslim community. The event will also launch a nationwide set of screening events with our film at different universities and communities, and panelists will be asked to reflect on proactive strategies Americans can use to respond to this rising Islamophobia.

Make sure to click 'Join' on this Facebook event page to confirm attendance. A few minutes before the event begins on Thursday, we will post the Livestream Access Link on the event page wall.

The event takes place at Georgetown University at ICC Auditorium. Doors open at 6:45 PM, event starts at 7:00 pm. Make sure to RSVP to confirm you have a seat there at this link: www.upf.tv/islamophobia 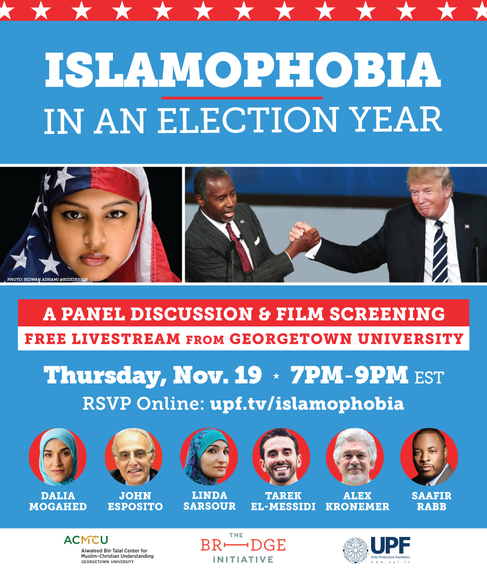