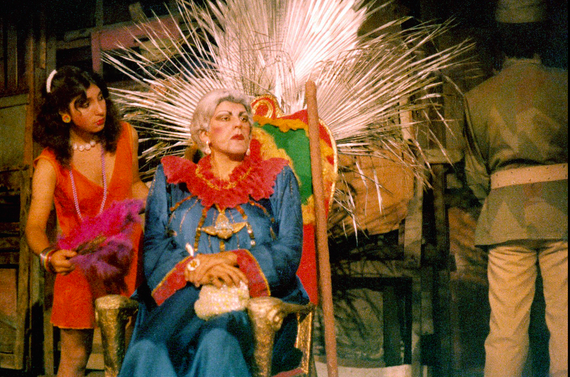 By 1984 I had read many of the novels the Colombian writer had published until then.

The year before, the theater group Comunidad de Lima had assigned me to adapt the tale The Incredible and Sad Story of Candida Eréndira and Her Heartless Grandmother.

It was a simple and exquisite novel, full of contradictory adjectives and out-of-this-world scenes that made my imagination fly farther than it had ever flown.

To get to know Eréndira, the grandmother, the swamps of the past, the Amadises and the wind of misfortune, I had to meet García Márquez. I spent months in libraries researching and reading as many magic realism books as I could find.

I moved to Macondo. I met the Colonel, the patriarch, the Big Mama, the castaway, the blue dog, the foretold death. I spoke with the handsomest drowned man, the ghost ship and Blackaman. I found part of the screenplay version of Eréndira in a Cuban magazine. I just looked at it but did not read it.

I wanted to write my own adaptation.

The biggest challenge for Eréndira was not only to pay her grandmother the debt of 872,315 pesos. For me, it was to convince the audience that the images and texts do justice to the beauty of the García Márquez prose. How could I put into context the time and space without being obvious, keeping the magic without being descriptive?

The grandmother and granddaughter were sound characters, with irreplaceable dialogues. It lacked a common thread to become an effective translation into theater, and the photographer character, assumed that role who, like a Greek chorus, led us through the Colombian desert.

Still, images of ostriches, thirsty graves, luminous and flying stingrays, nuns with tuberculosis, oranges with diamonds, needed to preserve the disbelief and the exaggeration to the point of admiration.

How to do justice to such imagination?

We just had to look around. We lived in Latin America, in countries with intersecting stories, military coups, disappearing people, fraudulent elections, absurd rituals and ossified customs.

We decided then to incorporate original songs to the play, trying to keep a light environment within the depth of the abuse, oppression, contrivance, the nerve and madness of the grandmother.

When writing his novels and short stories, García Márquez was inspired by his own life and the people who crossed his path. We did the same, digging into our own local realities.

The first and second acts were ready. The third was the only one still in progress. One night, at the end of a group discussion, the director of the play Carlos Padilla Pardo said: "I think Elio could play the role of the grandma."

You can imagine my surprise. A man playing the grandmother in a conservative society? Besides, I was not sure I could do justice to that role.

At that time, Peru was experiencing an inflation that would become rampant, scarcity -- I remember how precious sugar was -- terrorist bombings, constant blackouts and political disorder.

To Padilla, the grandmother was a man: a dictator, abusive and oppressive, disguised as a woman, who in order to convince and reach her goals would use the unscrupulous wiles of a sneaky female. She was the sum of defects of both genders, made up with musk, dressed in satin and perfumed with the yellow roses García Márquez admired.

I already knew the character but the challenge was not to turn it into a cartoon.

I accepted the challenge. I had nightmares of violent fires, melancholic fevers and windy nights with hungry moths that served to calm the storms of that challenge.

The grandmother was a white, huge whale. I had to age 50 years and put on 100 pounds. I had to experience delusions, refine my voice and shave my beard, which at that time was black.

There was nothing that two silver wigs, makeup, and jewelry could not achieve. A super-sized body, with flabby and lopsided breasts, opulent buttocks and a Botero-like belly completed the facade, along with three colorful cotton, taffeta and lace dresses, and square-heel boots that made me reach 6'2" height.

The conversion would take me two hours every night.

The set design was masterful: Two truckloads of sand in the center of the seating. The stage got covered with XIX century adobe bricks we got from a demolished building. The enormous grandma's house with painted backdrops, which were destroyed during the fire every night. The fire was real.

It was a real marvelous mise-en-scène. It was our best way to pay García Márquez tribute.

The season lasted three months, four shows per week. For the last show, more than 50 people were left outside in the middle of the damp and cold Lima winter. We extended the season for an additional month.

Gabo made us acknowledge Latin America, this magic and wonderful land where a blind person gets his sight back, someone without legs runs a marathon and a whore ends up being canonized.

Thirty years ago I lived García Márquez. Maybe I need 70 more years to get to know the solitude.