Chess sometimes becomes a beautiful game even in the eyes of those who don't play it. Find a charming town, bring back its glorious past, turn people into chess pieces, invite kids and a jester and you can evoke magical moments. 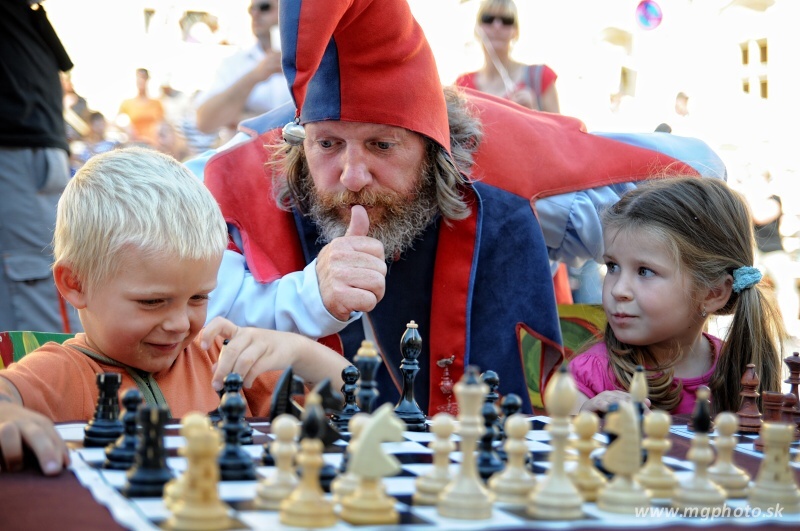 Every year since 2005, the picturesque Slovak town of Banska Stiavnica stages a game of living chess. It is a powerful, almost mystical, spectacle with human chess pieces dressed into medieval costumes and armed with spears and swords. They are moving on a big chessboard to the sound of drums and trumpets. 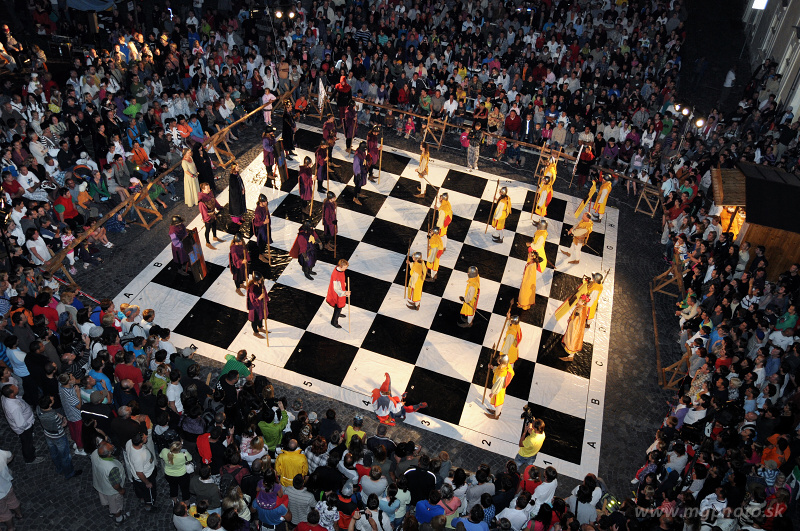 On Saturday, July 16, they were recreating a live blindfold game I was playing against the legendary Hungarian grandmaster Lajos Portisch. The top-rated American grandmaster Hikaru Nakamura became Stiavnica's king last year, defeating GM Sergei Movsesian. Who would get the royal crown this year?

Banska Stiavnica is nestled in the mountains and surrounded by beautiful lakes. Several churches and castles add to the charm of the Slovak town proclaimed by UNESCO as one of its world heritage sites. It was an important place already in the 13th century, rich in gold and silver, with 40,000 inhabitants. Only 10,000 people live there today. Many of them participated in the chess festivities. 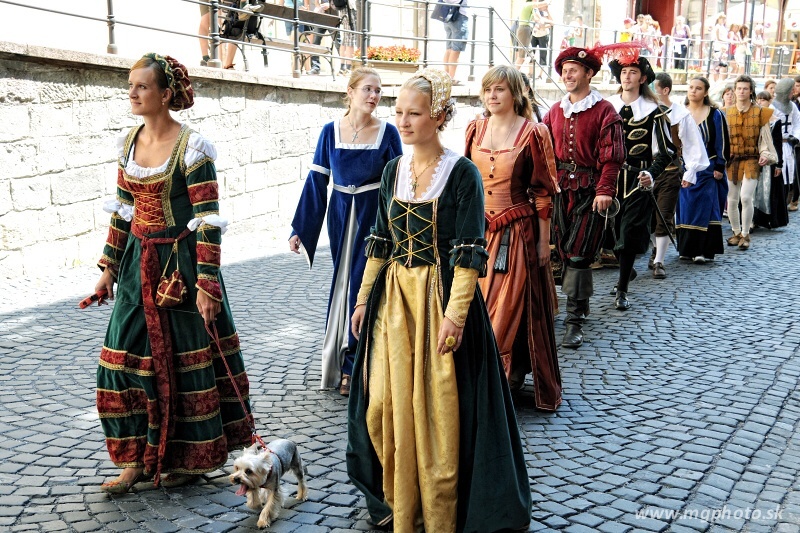 The day of the game began with a costume parade through the town's main street to the Holy Trinity square, where most of the action took place. In the afternoon Portisch and I played simultaneous exhibitions there. 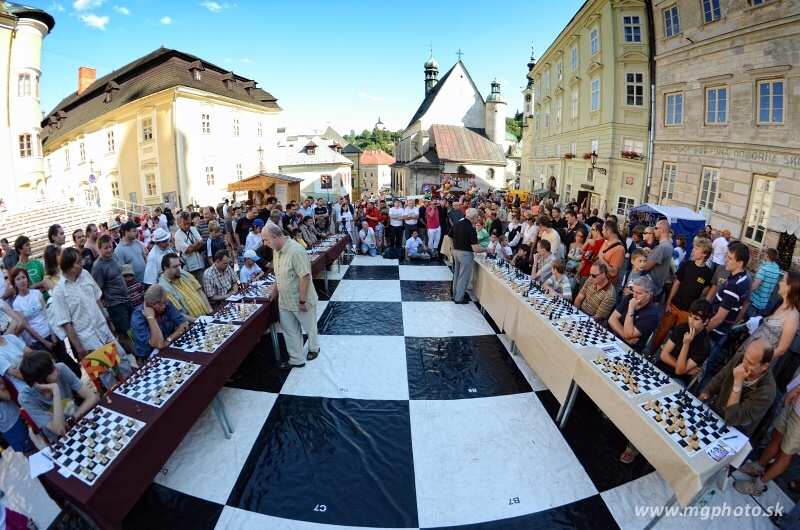 It was in January 1986 when we played a similar exhibition in Italy. Our own encounters over the chessboard go further back. We met the first time at the 1963 Zonal tournament in Halle that Portisch won ahead of Bent Larsen and Bora Ivkov. This grandmaster trio made it even to the Candidates matches. Throughout his career, Portisch was a formidable opponent to anybody and in 1981 was rated as world's number two behind Anatoly Karpov.

During the next five decades Portisch and I fought in two dozen games. He has dominated me in the world-class tournaments, but the advantage tilted slightly in my favor during chess olympiads when we faced each other on the top board. My victory in Thessaloniki in 1984 helped the U.S. team to win the bronze medals just half a point ahead of Hungary. We never played a blindfold game against each other.

Slovakia witnessed a world record in the blindfold simultaneous play in January 1921 in the town of Kosice when another Hungarian champion, Guyla Breyer (1893-1921), played 25 opponents at the same time. Breyer was an immensely talented player and theoretician. His knight leap backward (1.e4 e5 2.Nf3 Nc6 3.Bb5 a6 4.Ba4 Nf6 5.0-0 Be7 6.Re1 b5 7.Bb3 d6 8. c3 0-0 9.h3 Nb8) still gives fits to the proponents of the Spanish game. The defense was used by world-top players from Boris Spassky to Magnus Carlsen.

Portisch came to Banska Stiavnica not only for chess, but to give a singing performance at the closing ceremony of the International Championship of Slovakia -- part of the entire chess festival organized by Milan Maros and his team. Portisch's musical repertoire, mostly Franz Schubert's German romantic songs, fits the chess grandmaster who once famously stated that the main objective in the opening is to reach a playable middlegame. 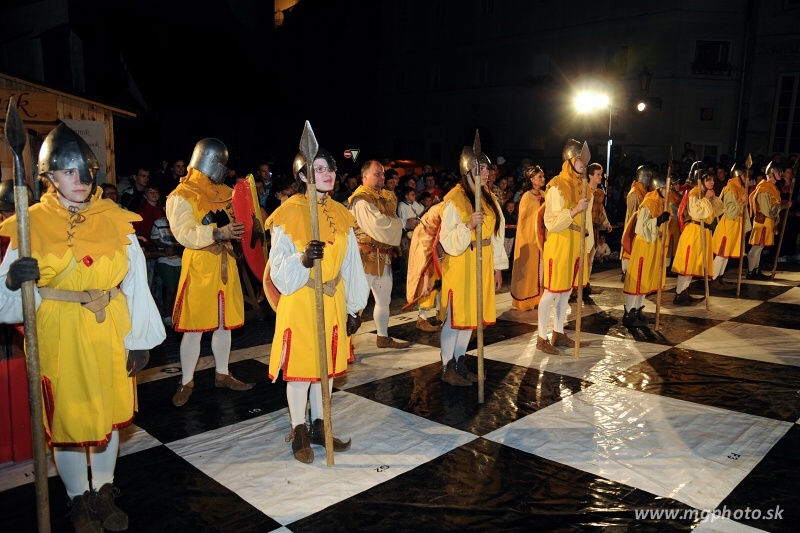 1.d4 Nf6 2.c4 g6 3.Nc3 Bg7 4.e4 d6 5.f3
(In 1975 in Wijk aan Zee, I won the Leo van Kuijk prize for the most spectacular game of the tournament against Lajos Portisch and the tradition of the spectacular prizes begun. As in this game, the Samisch variation of the King's Indian defense was played and I positionally sacrificed my queen for a mere bishop and a pawn and the game was eventually drawn.)
5...Nc6
(I decided to accelerate Oscar Panno's idea to play on the queenside.)
6.Nge2 0-0 7.Bg5
(For some reason, the bishop move too far has better results than the dominant 7.Be3.)
7...a6 8.Qd2 Rb8 9.h4!?
(Portisch goes for the sharpest line. The positional answer is 9.Rc1.) 9...b5 10.0-0-0 (Larry Christiansen's 10.h5!? is preferable. The white king is pretty safe in the middle.) 10...bxc4 (The stopper 10...h5 makes it more difficult for white to ignite the attack, but in the blindfold game, with the eyes closed, you just go.) 11.h5 Nb4 (I only found out after the game that everything was played before.) 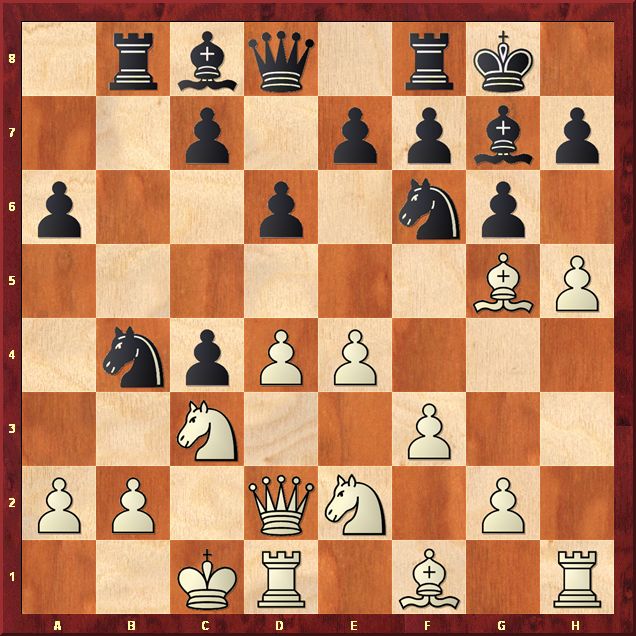 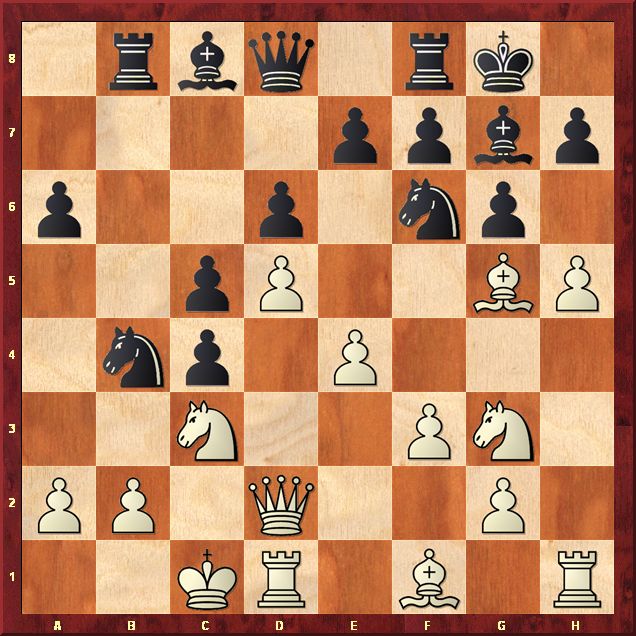 13...Qa5?! (Bringing the queen out seems natural, but the computer engines scream for the stunning knight sacrifice 13...Nfxd5!, for example 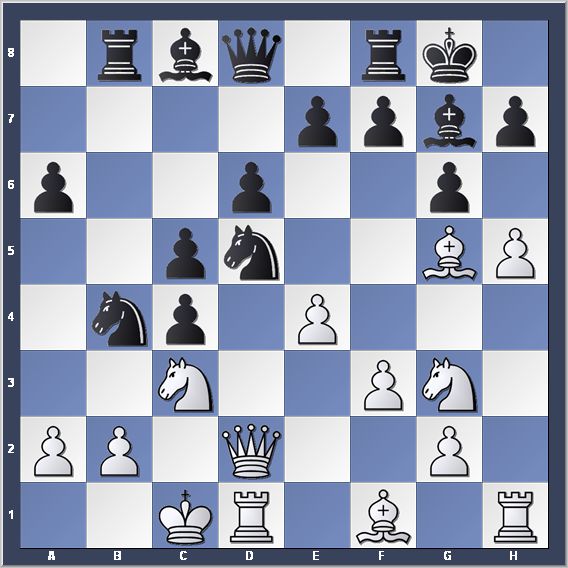 14.Bxc4 Nd7! (I came to this idea one move too late. The knight wants to leap into attack, creating a havoc in white's camp. "As a former King's Indian player you should have known to keep the knight on f6 to defend your king," GM Jan Plachetka told me after the game, but I felt the knight could play a more ambitious role in the game.) 15.hxg6 (At this point Lajos announced "pawn h5 to h6," but it was an obvious slip of the tongue and he quickly corrected himself with "pawn h5 takes g6.")

15...Ne5? (I should have been punished for this reckless move. I was briefly contemplating to retake with the f-pawn, but I thought I could gain a tempo by attacking the bishop. As a matter of fact 15...fxg6 was correct, for example 16.Bh6 Bxh6 17.Qxh6 Rf7 stops white's attack and after 18.a3 Qb6 white can't cash in the knight since after 19.axb4 Qxb4 20.Rd2 Qxc4 black is clearly on top.) 16.Bh6? (Lajos could have finished the game with 16.gxh7+! Kh8 17.Bh6 when black would have had to resort to some acrobatics with 17...Bf6 18.Qe2 Rd8 but after 19.Rd2 making room for the king to move to the kingside, white enjoys sufficient material advantage to win.) 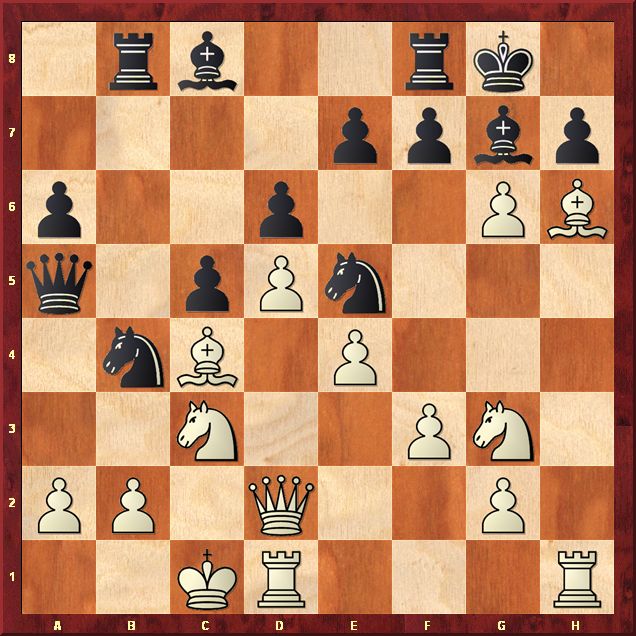 The drums stopped and silence dropped on the old town square. It seemed it lasted an hour, but only a few seconds elapsed. I froze, unable to think. The drums, the applause after each move by nearly 1,000 spectators, brought my brain to halt. Didn't Lajos hang a bishop?

16...Nxc4?? (A terrible blunder. I must have been on another planet, thinking about previous misses and not paying attention to the situation on the board. It was a decisive moment and I failed to fight back with 16...fxg6 17.Bxg7 Kxg7 and white has to be careful, for example 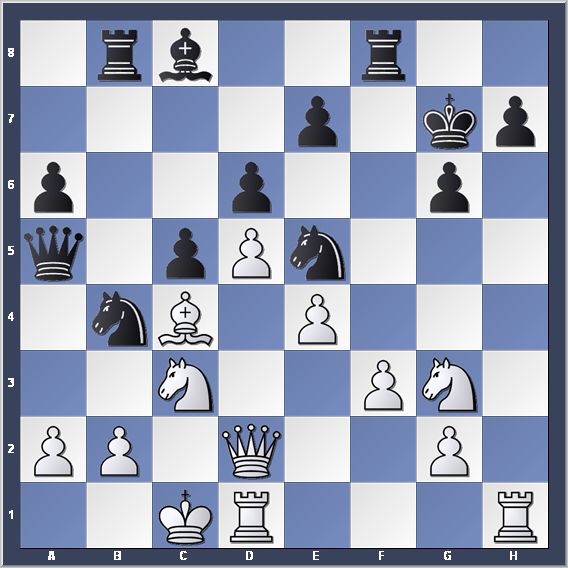 17.gxh7+ (This led to a quick mate, but before we got there, lots of pieces disappeared from the live board. The spectators got their money's worth since every capture resulted in a swashbuckling duel on the live board.) 17...Kxh7 18.Bxg7+ Kg8 19.Rh8+ Kxg7 20.Qh6 mate.

"What happened to my king? Did he get killed by a sword?"
"No," they said." They only took his crown away and placed it on Portisch's head."
A new king of Banska Stiavnica was born.

Pictured below from the left: Portisch, the chief organizor Milan Maros, Kavalek. 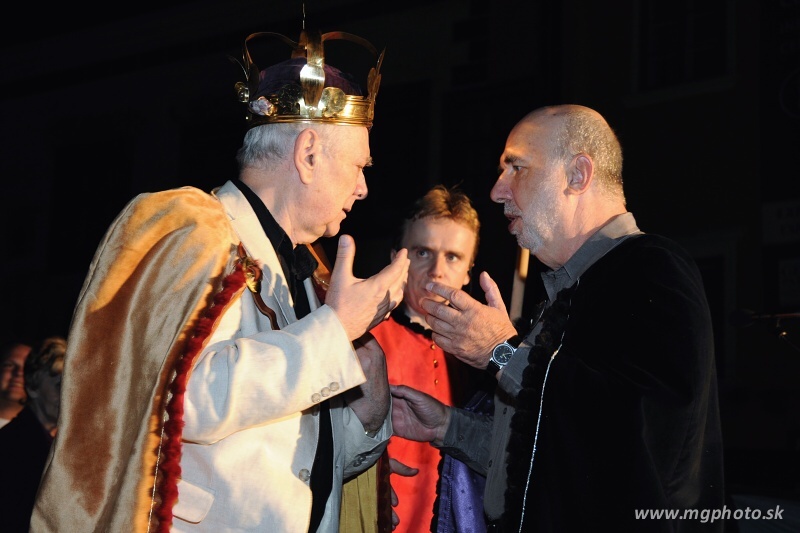 "Congratulations, Lajos. You can smile now!" 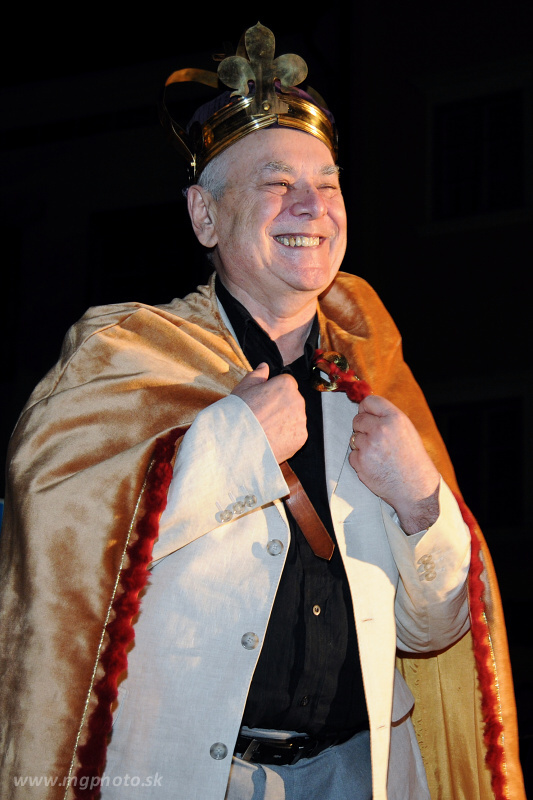