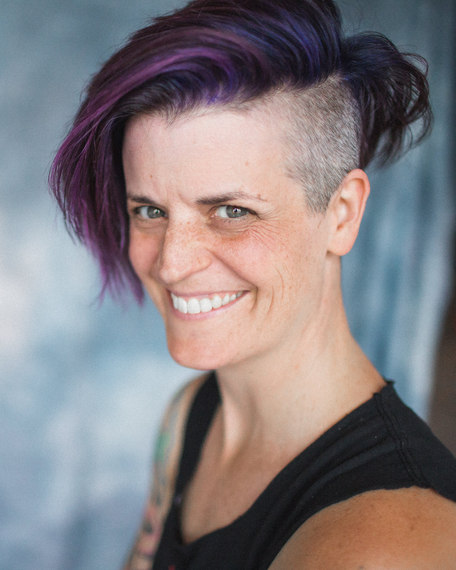 I recently got to sit down with a woman who I view to be a living legend in the Chicago theatre community. I'm less familiar with the local theatre scenes in Los Angeles and New York, but as any Chicago artist knows, the environment of Chicago theatre is teeming with artists who are nothing but 100% dedicated to making art purely for the sake of making important art, regardless of financial gain, exposure, or hopes of networking. Broadway and Hollywood are too far away to create distractions. It is a truly humbling environment. Molly Brennan is a beautiful depiction of this idea.

Coming from a small town in New Hampshire, founded by her own family no less, Molly moved to Chicago with the original plan of attending grad school to get her MFA. But when she discovered the ability to make the kind of art that mattered to her and was done so in the direction of her choosing, she joined a theatre ensemble, entitled Factory Theatre, where the creation of original theatre was nothing but highly encouraged. She wrote and performed four plays, which gave her the real graduate school type of experience that she craved.

Most artists enter the grind understanding that the numbers are highly out of their favor. The ratio of everyday work versus the number of competition is so astronomically out of wack that many aspiring artists tend to say "fuck it" within 5-10 years and move on. However, for those that are willing to stick it out, like Molly, artists continue to take whatever little offers come their way and create their own exposure, and, eventually, they can grow into amazing opportunities. As Molly said, she was never focused on trying to make a living out of artistry. She had plenty of side jobs to help her along the way, including working at the very first Potbelly's, lol right? She just did the work. And her psyche was, and continues to be, driven by that instinctual desire. In fact, she has found that work has saved her life multiple times. She is a true artist in my eyes.

As Molly continued to make more of her own, original work, she found that she was growing onto people's radars, without the driving intention of doing so. The honesty and originality of her writing, mixed with her resiliency of staying in the game has exposed her to amazing stages, including Steppenwolf Theatre Company and Lookingglass Theatre. (In fact, we learned that I had seen her in a hue production at Steppenwolf in 2009. I was 17 and had no idea.) All because of how she prioritized she life.

Priorities. That was something we discussed for awhile. Everyone is entitled to whatever priorities help them thrive. Financial, spiritual, familial, whatever. They're all justified. But every priority also comes with its drawbacks. Any artist knows that a financial gain from an artistic lifestyle is a far, far away possible reality. And at some point, we all have to ask ourselves what priorities we want to place foremost. And for Molly, that was an easy answer:

"I've prioritized really different things. I don't own anything. Two bicycles. A dog. And a really cool set of costumes and props."

Molly has built a life where the work is the center of everything she does. Whether she gets paid or not doesn't matter. Making the work is the work. That in and of itself feeds her in a way that any corporate "kill me" job could never ever do. And not only performing. Everything about the lifestyle of an artist excites her. Auditioning is a grueling part of the artistic journey that many people develop fear and anxiety over. But for Molly, auditions gives her a chance to show someone new who the f she is. She loves it. Another sign of a true artist.

There are days and even months where Molly doesn't know when the work is going to come again because that's oftentimes how this shit works. But that doesn't matter. In between gigs, she always finds her way into pop-in performances, various improvs, and one-woman stand-up sets, knowing that the next job is somewhere in the near future. The journey has to be enjoyable, or else how will we know the struggle is worth it? I know that's generic AF, but we're all just too #blessed to deny it.

Molly Brennan is a Chicago-based actor, frequently seen performing at the Lookingglass Theatre and was named Chicago's "Queen of Mischief and Make Believe" by American Theatre Magazine in February 2016. So chill, right?