It’s not cheap to live in Hawaii. It wasn’t 20 years ago and it’s still not today.

In the early 1990s, two volumes of "The Price of Paradise" asked tough questions about Hawaii's cost of living and sought to figure out what we can do to make it better.

“The goal of the books was to get the conversation going,” said Randall Roth, the University of Hawaii law professor who edited them. Chapters in "The Price of Paradise" were written by various experts and academics, and Roth told Civil Beat in a recent interview that he intentionally chose to examine issues that he didn’t think would ever go away.

He was right. Today, the conversation is still much the same.

Big-box stores like Costco and the arrival of some chains like Safeway have brought down the cost of some items, although still not consistently to mainland levels.

The “paradise tax” — the price people are willing to pay to call the islands home — is still high despite the efforts of Roth and others to get political and business leaders to take action to reduce it 20 years ago.

Politics and policy decisions, exacerbated by Hawaii's long history as a one-party state, have stifled meaningful public discussion and allowed special interests to control the marketplace and costs, Roth said.

The dearth of public debate on policy issues has created a relatively complacent society. And in part because of the high cost of living, people are so busy paying bills and eking out a living that they just accept it, he said.

“The level of civic engagement in Hawaii is not nearly what it should be," Roth said.

“People complain every once in awhile, but they don’t feel individually that they can do something about it other than get another job or move to a new place.”

In this "Living Hawaii" series, Civil Beat hopes to reenergize the conversation Roth and his authors started 20 years ago.

In this installment, we wanted to reacquaint readers with how things have changed, using "The Price of Paradise" as a benchmark by which to measure progress — or lack of it.

We talked to economists, professors and tax experts to gain a sense of how the cost of living in Hawaii has changed since the “Paradise” books were penned.

Some said it’s more affordable thanks to big-box stores setting up shop and bringing mainland prices to the isles. Others said it’s worsened with the increase in population, higher taxes and political leaders beholden to special interests. No data exists to tell us conclusively who is right.

The experts often brought up the lack of political will to wean the state off its oil addiction and how that has resulted in record-high energy prices. And they noted that dependency on tourism has made Hawaii more susceptible to global economic changes.

They still view housing as the primary driver that makes Hawaii the most expensive place to live in the country. But they also pointed to the cost of food and the price we pay for shipping goods to and from the islands as major elements in rising prices.

Take a look at a snapshot of how the average price of essential elements in our island lives has risen since 1992.

Costs for essential items have mushroomed in Hawaii while not rising nearly as fast on the mainland. Yes, the housing market on the mainland tanked while Hawaii's has remained relatively stable, skewing that comparison. But housing is perhaps the most critical element of the cost of living in Hawaii.

One of Hawaii’s leading economists, Paul Brewbaker, put a number on the “paradise tax” back in 1992. He said at the time that it cost almost 40 percent more to live in the Aloha State than the mainland, on average.

Brewbaker told Civil Beat last week that his best guess of where Hawaii stands today would be 25 percent, the low end of a historic range dating back to the 1960s.

“Relatively speaking, it’s never been that much cheaper in Honolulu than now but it has been way more expensive, historically, from cycle to cycle, as in the Japan Bubble of the late-1980s,” Brewbaker said.

The U.S. Commerce Department’s Bureau of Economic Analysis released a report in June that said Hawaii’s cost of living is 16 percent higher than the national average, not too far off Brewbaker's estimate.

It's difficult to come up with numbers today to compare it with the 1990s because government agencies and others, including financial institutions, quit collecting the necessary data a number of years ago. There’s no reliable data that was kept year over year on the cost of living in Hawaii relative to the rest of the country, according to University of Hawaii economist Carl Bonham.

He said the Economic Research Institute estimated in 2012 that Oahu residents need 85 percent more money in their annual household budgets than mainland residents, suggesting the cost-of-living gap has widened over the last 20 years. Rent, utilities and insurance account for 61 percent of a household's total budget in Hawaii, he said.

But consumer price index data, Tian said, indicates the relative cost of living in Honolulu as compared with the U.S. has slightly improved over the same time period. The Roofs Over Our Heads

The high cost of Hawaii living is primarily a result of much more expensive housing, a cost that spiked in the early 1990s when the “Paradise” books were written.

Home prices increased 760 percent from 1972 to 1990, but the typical middle-income family's ability to afford the mortgage payments on a typical single-family home stayed about the same during the 1980s and 1990s in part because incomes continued to rise, according to Leroy Laney’s chapter on the cost of living. Laney was vice president and chief economist of First Hawaiian Bank at the time.

Housing prices were driven up by foreign speculation, a strong economy and rising population, Laney said.

James Mak and Marcia Sakai, University of Hawaii professors of economics and business, wrote in the first “Paradise” book that the Japanese accounted for 98 percent of the foreign investments in 1990. This is the Japan Bubble that Brewbaker talks about.

The Japanese were paying 21 percent more than market value for residential and commercial properties. These investors bought $7.3 billion worth of Hawaii real estate in 1989 and 1990 alone, they said.

Mak and Sakai singled out Japanese billionaire Genshiro Kawamoto in particular because he bought 100 properties in east Honolulu, offering cash from the back seat of his limo.

Kawamoto made headlines earlier this month after selling 31 of his Kahala properties to Alexander & Baldwin for $98 million. Many of the homes have sat vacant for years, falling into disrepair and causing neighbors to complain of a blight in the area.

After plummeting during the recession, home prices are again on the rise in Hawaii. But the market is not seeing the meteoric climb that happened 20 years ago.

Still, Hawaii residents continue to spend a higher percentage of their income on housing than elsewhere in the nation while earning less then their mainland counterparts when the cost of living is factored in. 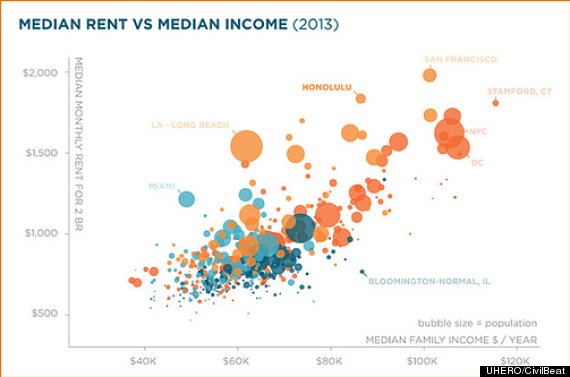 UHERO University of Hawaii Economic Research Organization chart on income versus rent. Brewbaker's view: You get what you pay for. People are willing to spend more on housing than they might on the mainland in exchange for getting to live in a place they enjoy — there's year-round good weather, natural beauty and other amenities that make Hawaii an enviable place to live.

And a dollar doesn't go as far in the Aloha State as elsewhere, according to University of Hawaii research economist Kimberly Burnett.

Although Hawaii's income grew faster than the national average in 2011, Hawaii's real per-capita incomes were among the lowest in the nation at $32,500 compared to a national average of $36,500, Burnett wrote in a June report. That was based on recently released inflation-adjusted estimates of personal income for states and metropolitan areas which account for these differences by the U.S. Bureau of Economic Analysis.

Lowell Kalapa, president of The Tax Foundation of Hawaii, says Hawaii's cost of living is as high as ever. Kalapa wrote chapters on government spending in each volume of "The Price of Paradise."

He, too, pointed at housing as a primary factor, but also blames local residents for stalling developments that could ease housing prices by providing more affordable units. The "not in my backyard" attitude is apparent in places like Kakaako and Waipio, he notes, where people worry housing projects are going to contribute to traffic, strain existing infrastructure and block their views.

“Where then do we put people who want a house?” Kalapa said. “So you got there first, so no housing for others?”

It’s a basic law of supply and demand, Kalapa said. There aren’t enough housing units available on the market to drive prices down.

Kalapa doesn’t see relief anytime soon. The state’s notoriously high taxes have only worsened since the “Paradise” books were written, he said.

What was supposed to be a temporary hotel tax, for instance, has since become permanent and was raised in 2010 from 7.25 percent to 9.25 percent.

Kalapa said the general excise tax, which governments love for its efficiency and seemingly low rate on the surface (roughly 4.5 percent in Hawaii), hampers business because it taxes transactions at every step.

However, going to a true sales tax, like most states have, would mean having to exempt food and healthcare costs, likely resulting in a rate of 10 percent or 11 percent to match the $2 billion in revenue Hawaii currently hauls in via the GET. That would be the highest sales tax in the nation, he said, making it a very unlikely political move.

Hawaii is one of the only states that taxes food, which already costs more than on the mainland.

Brewbaker said he has seen food prices fall since the arrival of mainland stores like Safeway and Costco. He said the most important structural change over the past two decades in Hawaii concerning the cost of living is “mainland pricing,” which was absent before Costco.

Technology and logistics have enabled big-box stores and Internet distribution as well as global brand penetration. Those factors were either nonexistent at the time of the “Paradise” volumes or too new to have had a narrowing effect on the cost-of-living differential, Brewbaker said.

But he believes that things are different today.

“Go ahead, I dare you to walk around Costco or Safeway and tell me that prices in Boulder, Colorado are 20 to 40 percent cheaper,” he said. “Once upon a time, maybe, but I’m talking about comparing pricing on the exact same merchandise and the gap today is much narrower.”

Kalapa isn't so sure Costco is helping bring down the cost of living all that much. He says families are suffering today as much as they were in the 1990s from high food costs. And when families skimp on food costs to save money, he said, the price is an unhealthy diet. Soda, for instance, is cheaper than milk.

For Hawaii residents, right now it all comes back to what they are willing to pay to live here. Whether there are ways to bring those costs down is fodder for the broader community debate that Roth started in 1992 with "The Price of Paradise."

Brewbaker says you need to look no further than the cost of gas — it's higher in Hawaii than anywhere else in the U.S. — to see his point.

“My interpretation of the fact that there are more late-model pick-up trucks on Oahu roads ... than there are hybrids and electric vehicles combined, is that gasoline is not really as much more expensive as people love to complain about it being in Hawaii,” he said. “It’s so expensive you haven’t gotten rid of your SUV, numbskull.”