Walking home from a neighbor's late last night, I was surprised to see a plume of heavy smoke rising above the treetops like the spout of a whale. Even at night, the smoke remained visible in the dark, the grey smog several shades lighter than the black sky, an ominous cloud blocking out the stars.

I could no longer deny it; the lava is coming.

Earlier this month, my town of Pahoa--a small, eclectic jungle town in the district of Puna on the Big Island of Hawaii--was declared to be in a state of emergency as lava began to pour steadily from mouth of the active volcano Kilauea.

Arriving home from my night walk, I noticed the smoke plume remained visible from my back porch and later, from my bedroom window.

The lava flow officially began on June 27, oozing slowly forward and attracting a substantial stream of attention. At first, the projected damage was minimal. Now, it is anticipated that within the next week or so, the flow will take out the town-center of Pahoa, possibly flowing over power lines, businesses, gas stations, grocery stores and residential homes and cutting off our main access road, threatening to leave the inhabitants of lower Puna virtually land-locked, and potentially without electricity or running water. 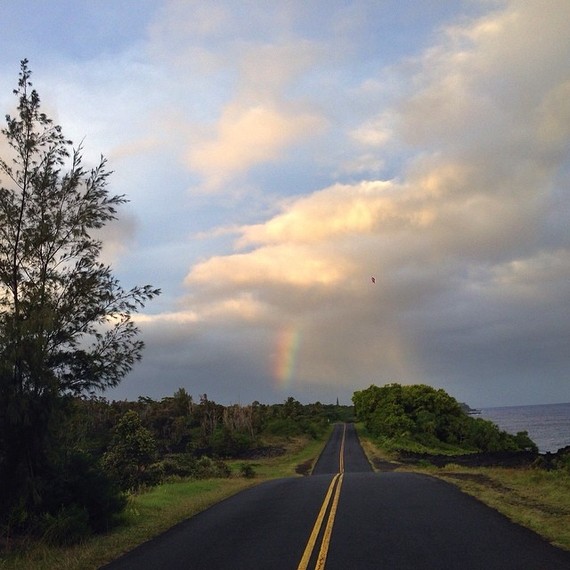 An overarching anxiety bubbles in the belly of my community, and community leaders come together to make plans for the future--the setting up of gypsy-style schools, the arrangement of food distribution once the drive to the nearest grocery store shifts from 20 minutes to several hours. Even local farmers who sell their produce at markets will have a hard time traveling to our corner of the island. Many talk about Pele--Hawai'i's volcano goddess--as if she were present and mindful. Some speak of her with respect, calling her Madame Pele. Others speak of her with fear.

While the impact of the lava is seemingly unpredictable, what is predictable is this: for those who live here, life is about to change.

Of course, the local government is working on new infrastructure to accommodate the impending disaster. Two alternative roads are being cleared of debris and widened to allow us a route out. The county is also working on a series of detour signs and temporary traffic lights to optimize traffic flow. The new routes will turn the 50 minute drive to the city of Hilo into a near 2 hour trek, and with the roads being unpaved and narrow, one can only imagine the kind of gridlock that will occur when an entire district of people try to access them. Currently, more than 7,000 vehicles travel the highway through Pahoa daily. Unfortunately, it is projected that these roads will only be a temporary solution; once the lava flows over the highway, it will eventually cross down to the ocean, overtaking the new roads and cutting us off completely.

Our sole power company is working on a contingency plan to keep the power running when the flow overtakes critical utility poles, and the Hawaii County Department of Water Supply has publicly stated that while water lines are safely buried, the flow could result in melted gaskets and major leaks, shutting down public water access.

Many are leaving, buying one way tickets to Portland and California. Cars line the road, their windows plastered with cardboard "For Sale" signs. Garage sales sprout up where those leaving attempt to unload their belongings quickly. Those planning to stick it out are busily talking sustainability. Some are already solar-powered; the rest are buying up generators.

Our small community is no stranger to natural disaster. Earlier this summer, Tropical Storm Iselle and hurricane Julio--the ultimate power couple of 2014-- rocked the island hard as they broke open our tiny ocean-front community, clearing trees, washing away entire beaches, ravaging parks and homes alike. Spared from the brunt of the physical destruction, I found myself out of power and Internet for 10 days, while some neighbors were down for as long as 17.

During the aftermath of the storm I had a friend visiting from the mainland. Together, we spent our time filling the toilet with rainwater collected in a large plastic bucket, and talking into the night with solar-powered headlamps illuminating our faces. While the destruction was alarming, the aftermath was eerily calm. Without power or Internet, there was no distraction of cell phones, no constant checking of my Instagram feed; when I needed to work, I drove 50 minutes into town to set up at a coffee shop. However, with the oncoming lava cutting off the main road access, that will no longer be an option.

It's not only the lava that threatens us. While my home is safely out of the lava's projected path, the eruption emits a heavy sheath of vog--volcanic air pollution that is unhealthy to breathe, causing headaches and respiratory issues that may make the surrounding areas, mine included, very much unlivable.

It's not as if we didn't know this could be coming. My very neighborhood is built on an old lava flow from the fifties, and only 5 miles down the road is another hardened flow from the eighties, the once-green land still black and barren, the twisted ground as alien as moon rock. This video--comedically narrated--shows stunning footage of a nearby flow in 1960 which wiped out the nearby community of Kapoho. 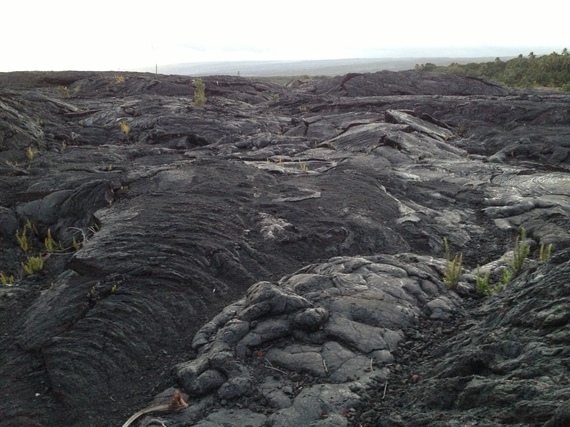 Despite the constant risk, the richness of the island makes the gamble worth it. From the bright blue Pacific, to the lush jungle, the sprawling prairie lands, the snowcapped mountains and stretches of desert, the Big Island boasts 11 of the 13 climate zones in the world. The creative energy that flows from this abundant place is astounding; although I've never considered myself an overtly spiritual person, the island's kinetic energy is palpable.

Unlike many other natural forms of chaos, lava is a slow-motion disaster. It moves so lackadaisically it rarely injures anyone, but it is also virtually unstoppable. As shown in the Kapoho video, it will take down anything in its path. Lava is also unpredictable. Over the past week, it has sped up, and then slowed down. It can flow in one direction for weeks only to turn around, or drop underground, or stop flowing completely. Pele is a fickle one, to say the least.

And so our community awaits her arrival, holding our collective breath, our eyes on the sky and the smoke that gathers there, attempting to plan for the unplannable.

As the earth is simultaneously being destroyed and created only miles from where I sleep, it's hard not to be both moved and humbled -- moved by the grandness of it, humbled by the power of a place that is continually evolving, and the realization that reality is malleable, that change is coming. It's not a question of if, but of when.