On October 17, 2004, the New York Times published a controversial article by Ron Suskind in which he quoted an aide to President George W. Bush (later identified as Karl Rove) as follows:

"The aide said that guys like me were 'in what we call the reality-based community,' which he defined as people who 'believe that solutions emerge from your judicious study of discernible reality.' ... 'That's not the way the world really works anymore,' he continued. 'We're an empire now, and when we act, we create our own reality. And while you're studying that reality -- judiciously, as you will -- we'll act again, creating other new realities, which you can study too, and that's how things will sort out. We're history's actors ... and you, all of you, will be left to just study what we do."

A continuing stream of nonsensical embarrassments from the faith-based community has proven that, just like explosive diarrhea, reality can be pretty messy. Or, at the very least, inconvenient. Bill Maher sums it up nicely in the following video clip:

In her program notes for the world premiere of Patience Worth, Symmetry Theatre Company's artistic director, Chloe Bronzan, writes:

"The phenomenon of Pearl Curran/Patience Worth was first brought to my attention by an August 2010 issue of Smithsonian Magazine in an article by Gioia Diliberto titled 'Ghost Writer.' The story instantly stirred my curiosity as I pondered the circumstances by which (or through which) a woman of limited education sometimes -- either by magic, miracle, conscious deception, unconscious deception, or some sort of unexplained physiological condition -- managed to earn the literary respect of such credible publications as The New York Times and convince many of her time's more scrutinizing debunkers of psychics that her powers were legitimate.

To this day, Pearl's story remains a mystery. Of the many possible explanations provided, none were entirely satisfying to me, which fueled my curiosity and inspired me to further explore Pearl's life in the form of a commissioned play. Not only did the idea of turning this story into a play pose an element of inevitable theatricality, it also promised a prismatic relevance." 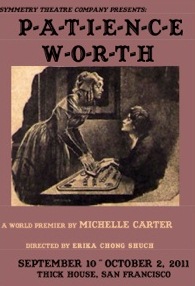 Poster art for Patience Worth

Although, at one point in this play's development process, the possibility was discussed of having a separate actress portray the character of the 'spirit,' Patience Worth, eventually Michelle Carter decided that this choice would too easily provide the audience with the explanation that Patience is indeed a being separate from the woman known as Pearl Curran. The playwright's final choice was to let the audience experience Pearl's 'possession' by Patience as others of her time may have witnessed it. 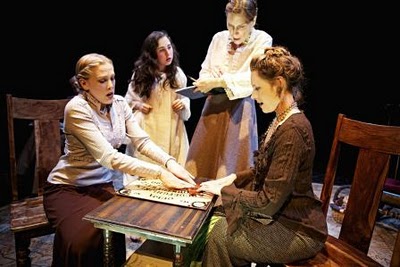 Onstage, Patience Worth benefited immensely from the superbly evocative, simple unit set that had been beautifully designed and lit by Allen Wilner. Aided by the sound design by Cliff Caruthers, Erika Chong Shuch directed this world premiere with the theatrical power of a ghost story and the literary bent of the most mystifying creative process imaginable. Michelle Carter's script is intelligent, strong, and meticulously crafted for the stage (although the finale could use some rethinking and clarification).

However, the bulk of the evening's theatricality rests on the shoulders of the actress portraying Pearl Curran/Patience Wirth. Megan Trout did herself proud with an intense performance whose "transitional movements" had obviously been coached by Erika Chong Shuch (who is also a noted Bay area choreographer). 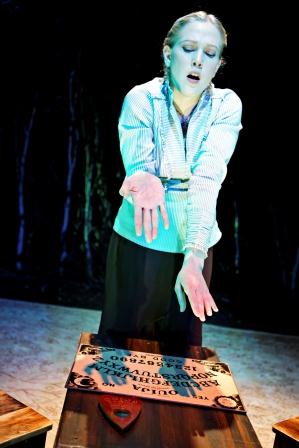 Using a ouija board, Pearl Curran (Megan Trout) channels
the spirit of Patience Worth (Photo by: Pak Han)

Patience Worth was Symmetry Theatre's second production. As with the previous Show and Tell, it marks Symmetry as a company with a keenly intelligent artistic vision. In June of 2012, the company will present the Bay area premiere of Huffington Post blogger Lauren Gunderson's Emilie: La Marquise du Chatelet Defends Her Life Tonight at the Berkeley City Club.


Written by Stefanie Zadravec, Honey Brown Eyes is set in Bosnia-Herzegovina in 1992. The action takes place in two kitchens: one in Visegrad (Act I), the other in Sarajevo (Act II).

What these kitchens share is a pathetic lack of food and a tenuous connection through two men who once performed together in a New Wave rock band. In one kitchen, a Serbian paramilitary must brutalize a Muslim woman in order to avoid being killed by his fellow soldiers. In the other, a Bosnian resistance fighter on the run seeks refuge in the home of an elderly woman.

As directed by Susi Damilano, the two kitchens share one of SFPlayhouse's major assets: a fascinating unit set designed by Bill English that can quickly transport audiences from one war-torn locale to the other. Act I of Honey Brown Eyes takes place in the barren home of Alma (Jennifer Stuckert), a young Bosnian woman whose husband has already been killed during the ethnic cleansing of the local Muslim population.

Dragan (Nic Grelli) is a young musician who was forced to join the paramilitary. But as he tries to convince Alma that she must leave, they soon come to the realization that Dragan used to play in the same band as Alma's idealistic brother, Denis. Alma's reluctance to abandon her home leaves Dragan with no choice but to take action in order to prevent himself from being murdered by his superiors. 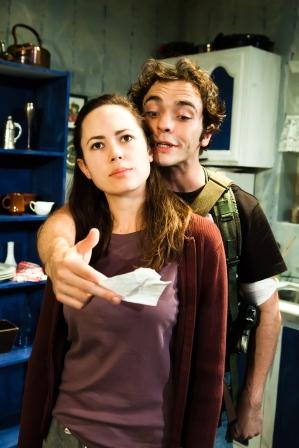 Alma (Jennifer Stuckert) finds herself at the mercy of
Dragan (Nic Grelli) in Honey Brown Eyes
(Photo by: Jessica Palopoli)

Meanwhile, in Sarajevo, an old widow named Jovanka (Wanda McCaddon) is trying to turn two onions and some rice into a meal when a young man bursts into her home and begs her to hide him. The audience soon learns that not only is Denis (Chad Deverman) Alma's long-lost brother, his future is every bit as doubtful as that of Alma's husband. 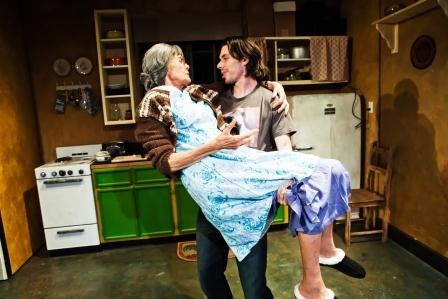