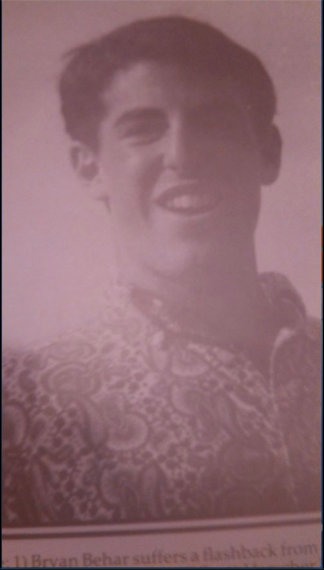 Around my house, I'm the source of near-constant mockery for my ability to be nostalgic for virtually anything that happened before right now. If the topic is even remotely related to "Encino in the 70's", apparently I not only have written eight articles about it, but I manage to even describe gas lines, smog alerts, Skylab and the Hillside Strangler in sepia-hued tones, like I'm a walking Ken Burns documentary in Puma sneakers. Okay, it's true that in the 80's I was obsessed with the 60's, so much that I planned some of my outfits by studying old Byrds album covers. And in the 80's, like '86, I was already throwing '80's Night" parties, heavy on Dexy's Midnight Runners and Toni Basil and Men Without Hats. As if these were songs from a bygone jukebox, not the radio three years earlier.

So, it should come as little surprise that I've been feeling awfully nostalgic lately. Nostalgic for a time when America was a beacon for all nations, a symbol of tolerance, inclusion, decency and basic goodness. I miss my country, one that welcomed the underdog and protected the most vulnerable. That not only elected, but re-elected it's first African-American President. A nation that made a woman a major party standard-bearer like it was no big deal. A nation that repudiated "don't ask, don't tell" and embraced marriage equality. A nation that extended healthcare to 20 million citizens who didn't previously have it, including those with pre-existing conditions. A nation that adheres to its treaties and alliances. And one that supports its allies and holds its enemies accountable. Not vice versa.

In short, I am tremendously nostalgic for the America of 3 weeks ago. It seems like a lifetime ago, as if it were something out of a history book. It feels like a national Brigadoon-- we can't even be sure it ever really happened.

I, like over half the country, am struggling to adapt to the new normal. Because nothing about it is normal or precedented in American history. I don't mean to be too glib, but it's violently disorienting to sit back and watch someone destroy your country. How do I root for my nation when I'm fundamentally resistant to its policies and its leadership? And how do I look anyone in the eye who supports it? There was a time when I couldn't understand how a kind-hearted human could root for the Yankees or Patriots. But this is like rooting for the Nazis. This is embracing a cabal out to destroy democratic norms and the pillars of a constitutional democracy.

I'm not an alarmist or a conspiracist or a particularly rabid partisan. I rarely posted about politics before this election. And I've always been capable of seeing decent public servants on both sides of the aisle. But this isn't about partisanship. This is a coup, plain and simple. It is a mad power grab through executive orders of people hell-bent on bypassing all other branches of government. They are out to discredit "so-called judges" and "fake news." Basically, anyone seeking to enforce traditional democratic accountability and stop them from imposing their mean-spirited, unconstitutional agenda. One that aims to punish the least powerful and least popular.

I don't know if anyone else is feeling this--I'm too depressed to ask--but I find it bizarre to go about my day-to-day life as if nothing tragic is concurrently happening. Like I can't even check my phone to update UCLA football recruiting without getting a new alert of some other basic civil liberty being curtailed by rash, ill-thought-out executive fiat.

Think about it. Before the election, my biggest worries were of the variety of "will I find a parking spot at Trader Joes?", "Will the Bachelor choose Ashley T. or will she be the next Bachelorette?'" And of course the perennial, "Will my pilot be picked up?", "Whose pilot was picked up?" and "Why the fuck do those hacks keep getting pilots picked up?" Today, my worries are more of the "is this a full Fascist takeover or just one with strong authoritarian tendencies?" Frankly, I never thought that having schadenfreude against overrated, well-coiffed sitcom writers would be the good old days. But it sure beats existential concerns about a heartless, narcissist mad man having control of the nuclear codes and Supreme Court appointments.

Lately, I've been overcome by free-floating anxiety and my sense of dread and foreboding is unprecedented. Or to use the parlance of the POTUS, "unpresidented." Every minute of every day feels like the pit-in-your-stomach moment in a horror movie where the unsuspecting dupe walks back in and says "there's no one in the garage" and second later stops a Samurai sword with his forehead. At all times, I feel the constant need to do something. And equally potent, countervailing thought that nothing I can do will make any difference. Firing off fifty tweets about Steve Bannon's appearance and apparent Jew-hating won't make much substantive difference. That said, it does feel pretty good.

And for friends of mine who bemoan that Facebook has gotten too political and should return to pictures of cats and people bragging about their ski trips, grow up. Sticking your head in the sand may work if you're an ostrich, but not if you are an empathetic, concerned grown-up human being. Which is not to say, I don't also enjoy your cat pictures. If you can get your feline to play the Hammond Organ, I may even share them.

Last Sunday night, after a weekend of visiting old high school friends, taking pictures of my daughter before her winter formal and seeing Rent for the first time, I was sitting on my couch watching the Pro Bowl. Now mind you, there is almost no football game I won't watch in its entirety. Same with futbol games. But on this night, I got hit with a wicked case of the shpilkes. It didn't feel appropriate that others were at airports around the country fighting the Muslim Ban while I loafed about watching Kirk Cousins in an exhibition game. To me, the only thing less American than discriminating by nationality is prioritizing by religion. And American Hitler's Muslim Ban manages to do both. So I got in the car and drove to LAX. It took me two and a half hours before I could park and join my voice of dissent with the hundreds already there. But other than nearly needing to pee in a Dasani bottle while driving by the Southwest terminal, I'm glad I went.

In Trump's America. free time may not seem free, as long as freedoms are perpetually under attack. More of our leisure time may be spent calling congressman and signing petitions and attending rallies. But ultimately, that's a small price to pay for trying to make American great again. Or, as great as it already was three weeks ago.