The New York Times Magazine has a big cover story on Rush Limbaugh this week, almost 8,000 words about how Rush Limbaugh has built himself into one of the most influential voices in America. With an estimated 14 million listeners (Limbaugh claims it's more like 20 million), he's far and away the top-rated radio talk-show host in America. That's partisan radio talk-show host — and he has no intention of being left out of this election. He already created big waves, first by publicly dissing John McCain and then by encouraging Republicans to mix into the democratic primaries and vote for Hillary Clinton and keep the Democratic nomination battle in play, in what he called "Operation Chaos." Both Karl Rove and John Kerry gave it credit for having had an effect.

Now Limbaugh has extended his contract through 2016 — $38 million per year with a "nine-figure signing bonus." The total package is valued at "north of $400 million."

Author Zev Chafets got more access to Limbaugh than any other journalist, being the first from the "hated mainstream media" to gain access to his studio and home. Here are some excerpts from the story:

Limbaugh on why he will reluctantly support McCain: ''It's like the Super Bowl...you root for the team you hate less. That's McCain.''

Limbaugh on how he plans to take on Obama: ''I'll approach Obama with fearless honesty...He's a liberal. I oppose liberals. That's all that's involved here.''

Limbaugh's tactics for doing so: Chafets reports on Limbaugh's appointment of his associate, Bo Snerdly, as the "Official Obama Criticizer" of his show. "Snerdly introduced himself as an ''African-American-in-good-standing-and-certified-black-enough-to-criticize-Obama guy,'' and declared that he was speaking, ''on behalf of our E.I.B. brothers and sisters in the hood.'' The bit was typical Limbaugh -- confrontational, deliberately insensitive and funny. It was also a declaration of independence. Whatever special courtesies John McCain might plan to extend to Barack Obama, Limbaugh is going to conduct his air war, as he always has, by his own rules of engagement."

On Living Limbaugh: "There are five homes -- all of them his -- on the property. The big house is 24,000 square feet. Limbaugh lives there with a cat. He's been married three times but has no children."

Chafets on Limbaugh's domestic preferences: "His staff lights fragrant candles throughout the house to greet his arrival from work each day."

On the view from his private humidor: "The room opens onto a patio, a putting green and a beach. On the table was a brochure for Limbaugh's newest airplane, a Gulfstream G550. It cost him, he told me, $54 million."

Limbaugh on success: ''Do you know what bought me all this?...Conservatism didn't buy this house. First and foremost I'm a businessman."

Limbaugh on his substance abuse: ''You know, I've had a problem with substance abuse. I don't deal with the future anymore. I take things one day at a time.''

What you see when you walk into Limbaugh's nondescript studio headquarters: "An American flag stands in the corner. Only a small, framed picture of Limbaugh, bearing the caption ''America's Anchorman,'' reveals that this is the headquarters of one of the country's most admired and reviled figures."

The full story will be online here shortly. 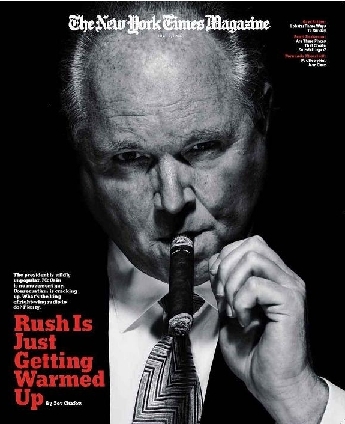