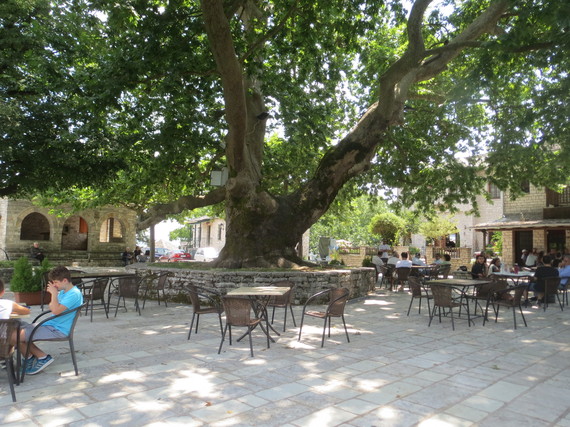 A recent dialogue between Robin Young and author Dan Buettner featured on the NPR show "Here and Now" explored Buettner's research about longevity.

My first reaction was - why is it important to live 100 years or more? "People who forget dying" was one of the quotes - and I pondered if thinking of death wouldn't actually bring a different, valuable perspective into our every day life. After all, there must be wisdom in plenty of life coaching tips that invite us to treasure our moment on earth, to remember it is unique, and that it may be over at anytime. We are so easily lost in the demands of daily life, that to remember our finitude can stimulate us to be more fully present, to be more thoughtful, and to consider our life's purpose.

But this was not the point of Mr. Buettner's research. As part of a National Geographic project, he identified five areas on the planet where people reached the highest longevity rates. He then visited them: one is the island of Ikaria in Greece, another is the island of Okinawa, Japan; then there is Nicoya Peninsula in Costa Rica, Loma Linda in California and the island of Sardinia, Italy. He wanted to find out what conditions led to these people living such longer lives.

Do you think that the way we live our life is conducive to longevity? I refer to going out late, smoking, partying, having physically sedentary days, eating lots of processed food, gobbling quick meals on the go, spending time alone in front of a screen, having long to do lists, and then multitasking as we try to speed up to accomplish those lists?

What Buettner found that these places had in common was that people lived at a slower pace; they spent time preparing fresh food, grown locally; they had a good dose of physical activity just by walking around (not driving), by tending gardens or farming. They also had a strong social network - getting together with others. In Okinawa, for example, there is moai, a Japanese term for a circle of people who meet frequently, and look after each other. These informal groups originated in Japan when farmers spontaneously met to discuss best farming techniques or solving common problems. It later involved money, and group members contributed a weekly or monthly amount to the group's fund, as a saving method that allowed individual members to take out a temporary loan at a given time. I recognized this practice, which I had seen in a different culture - among a group of Colombian immigrant women in South Florida, employed as domestic workers. They were very disciplined in contributing $20 every week to the fund.

The moai of Okinawa goes beyond money - they are mostly women and provide social and emotional support to each other. It reminded me of a group of almost three dozen girlfriends, from my high school class back in Argentina. We found each other again after three decades thanks to social media, and began to interact in different ways: face to face, whatsapp, emails, and phone. This has become a spontaneous support group with high empathy, and it plays an important role helping us through the ups and downs of life. By tacit agreement, there is no one leader, no judging, no arguments, no obligations - just spontaneous caring, respect and appreciation for each other.

The supportive connection and care seems to play an important role in the long-living populations - and has a value that our fast life in urban centers tends to obscure. Interestingly, apartment buildings provide us the minimal physical distance from one another, and - what a paradox--they tend to create the most isolated lives, with people hardly meeting, or just nodding to each other in elevators. U.S. suburban neighborhoods, designed for car-commuting, allow people to drive in and out their garages without the need to interact with their neighbors. In contrast, the "Transition Towns" , a growing global trend of communities designed to maximize human interaction, have plenty of common areas for people to walk and see/meet others, children's play grounds and social gathering spaces.

We are re-discovering some gems that our ancestors practiced. A few weeks ago I was in Zagori, the northern region of Greece. There, small ancient mountain villages have a central plaza, with a large tree in the center, surrounded with tables, chairs and benches, and under whose shade all generations of neighbors gather at different times during the day. To have a coffee, ouzo, to play board games, or simply to sit.

When people connect with each other, they establish bonds of mutual support. They develop feelings of indebtedness when they get help, and this creates positive feedback loops of mutual caring. Our neighbor lent us a tool, and I was motivated to return the kindness in other ways, so I brought my cookies over. This social fabric gets destroyed when we isolate from each other- and instead go to a store to buy the tool, or rent it out. The money involved breaks the human connection and converts it into a right or an obligation. I am obligated to pay you with good money, and you are obligated to give me a product that fulfills the promise. If not, we may even sue each other. The same dynamic is found where people make loans among friends, versus financial institutions making transactions and making profit out of people's monetary needs.

So the issue doesn't seem to be just 'how can we live longer'. Many of our 'modern and progressive' habits are based on increased consumption patterns, which skyrocket global emissions, pollute air, soil and water, drive hundreds of species into extinction, and reduce available groundwater. In other words, it's not about living longer - but how can we ensure we can continue living on this finite planet. And by the way, eating better, slowing our pace and connecting in a caring way with others, may also make us happier. As Buettner puts it - "beans, friends, purpose and movement." Not a bad alternative.

More:
healthy livingokinawaNPRpurposenational geographic
Newsletter Sign Up
The essential guide to taking care of your mind and body
Subscribe to HuffPost’s wellness email
Successfully Subscribed!
Wellness delivered to your inbox