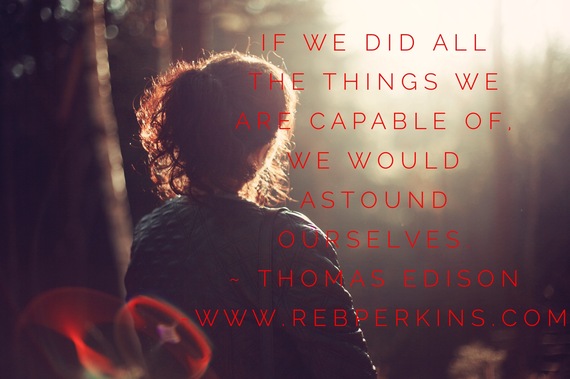 "If we did all the things we are capable of, we would astound ourselves." ~ Thomas Edison

I'm sure this isn't the first time you've seen this quote by Thomas Edison. However, I wonder if you've read it out loud and really stopped to think about it? How do you react to it? Do you shrug your shoulders or do you get that feeling of butterflies in your stomach? Or is it something else entirely?

How many times do you stop yourself from trying something new, from pursuing a business idea, from taking a leap of faith because your inner critic has jumped in first to scare you off? I doubt I'm the only one!

How many times have you used your age as an excuse for not doing something new or even continuing with something because you're scared?

The other week I sat in a nearby library surrounded by 20 midlife women, I'd been invited to read from my book, Best Knickers Always: 50 Lessons for Midlife and share some of my insights. It was a wonderfully moving evening. It wasn't just me who was moved to tears. I shared some of my story, the introduction to my book and a handful of the life lessons. My final question to the women who had gathered together was, 'what would you do if you were 10 times bolder?'

In reality we don't need to be 10 times bolder. We just need to be prepared to be courageous enough to take that step we've been putting off because we've allowed our inner critic to be head honcho. Isn't it time we stopped allowing fear to make the decisions for our life?

I love this, it's not a case of getting rid of fear, or insecurity, or whatever other reason (excuse) we're using to prevent us from acting. It's about working with it without giving it control. In theory of course this is easy, in practice it's another thing! We've had decades (many of us) of listening and acting on the fear that we've allowed to control us.

It's time to stop giving the negative voices in our heads the bandwidth they've continued to demand. We don't have to listen to them anymore. Admittedly in the past those negative voices served a purpose of sorts, helping to keep us safe and out of harms way. However, if we want to bust out of playing small and share our gifts and talents with the world then now is the time to take that first step.

Midlife is the time to show up. It's time to stop messing about. It's time to honor ourselves and our abilities. Life is too short, and we all know people who've been taken from this life way too soon. We owe it to them to live our life to the very fullest.

So where do we start? How do we take that first step and truly begin to believe Thomas Edison as he assures us that we are capable of so much more than we currently believe.

2. Similar to this is to have a curious outlook -- instead of believing that you can't do something even before we've tried. How about being curious in your thoughts instead, curious about the possibility of trying something different or doing something a different way.

3. Imagine how different life would be if you didn't allow fear, procrastination, excuses, to run the show? Grab a pen and a journal and allow yourself the freedom to explore and write about how life would look without the burden of fear?

4. Daydream about the future. Imagine yourself doing or even attempting the very thing you say you can't do. It might be going on a date. It might be applying for the job. It might be having a conversation you've been postponing with your partner or your adult child. It might be signing up for an art class. What else might it be that's going to help you start living midlife on purpose?