Everyone wants to live next to a park.

Frederick Law Olmsted, Sr. and his civic patrons knew this early on. Olmsted also saw it as the landscape architect's duty to carefully orchestrate the relationship between what he termed the "main park" and the "outer park," thus the adoption of generous setbacks, for example, along the edge of New York's Central Park from the contiguous high-rise development. 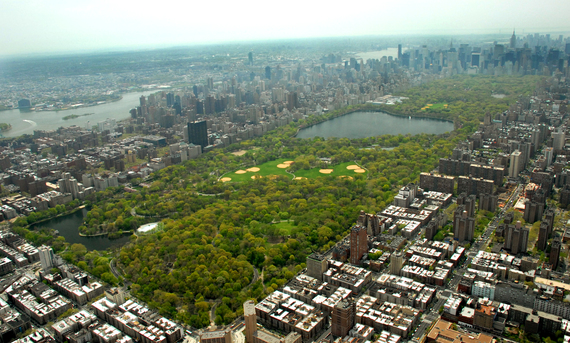 That recommendation regarding what Olmsted termed The Boundary Treatment of the Park was made in 1860 -- and development pressures on the edges of parks have been increasing ever since. Witold Rybczynski in City Life: Urban Expectation in the New World (1995) calls it "the clash between horizontal ideals and vertical aspirations" -- his poetic characterization of the situation in Chicago ... in 1869.

Proximity to a park is now a key marketing hook -- advertising tag lines like "Live Next to a Park" or "A Park to Call Your Own" tempt potential homeowners to glass sheathed Modernist condos like "Richard Meier's on Prospect Park" -- that park, of course, is the great masterwork of Olmsted and Calvert Vaux.

Given the North American urban renaissance, how much development can the highly desirable edge of a park absorb? How much vertical aspiration can our horizontal ideal accommodate?

It's one thing if the vertical on one side is supported by sweeping views on the other, but what happens when the park gets sandwiched? Take New York's High Line, a mile-long, 6.7-acre, uniquely Edenic sliver that ranges between 30 and 88 feet in width. As I've previously written, the High Line's 2013 visitation was 4.8 million people, 50% of them residents, vs. 3.7 million in 2011, (double the 2010 number). It's hard not to resist -- the views along the park's length, down to the streets, around the West Chelsea neighborhood and, in places, across the Hudson River make for a magical experience. 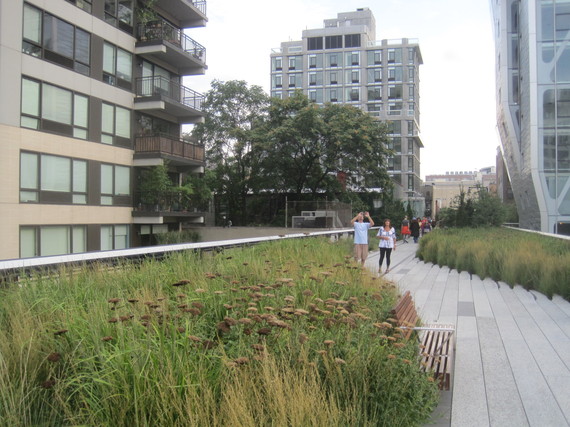 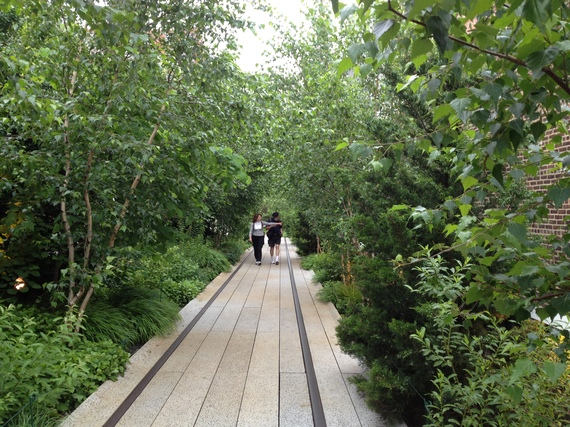 Part of the genius of the High Line is the complete absence of vehicular traffic -- it's limited solely to pedestrians. That may seem novel, but according to Bernard Rudofsky in Streets for People (1969), the concept is not a new one: "Leonardo da Vinci may claim to having been the first ... man to attack the problems of the twenty-first century street." That great Italian polymath, "foresaw a double system of streets -- street-level arteries for vehicles of every sort, and elevated streets for pedestrians."

Rudofsky didn't think the idea would take hold in the US: "While elevated traffic streets have been with us for quite some time, elevated streets for the exclusive use of pedestrians might seem absurd to Americans and altogether unfair to vehicles." Why? He later adds, "The idea ... is foreign to people who are bred to, and sometimes begotten in, the automobile." That latter jab notwithstanding, we seem to have turned a corner.

The High Line is a place to promenade and fits within the Italian tradition of the passeggiata. However, if you wish to find serenity and avoid the crowds, visit it early in the morning. I did so on a recent Saturday morning, only to be greeted by the sights and sounds of multiple residential construction projects. 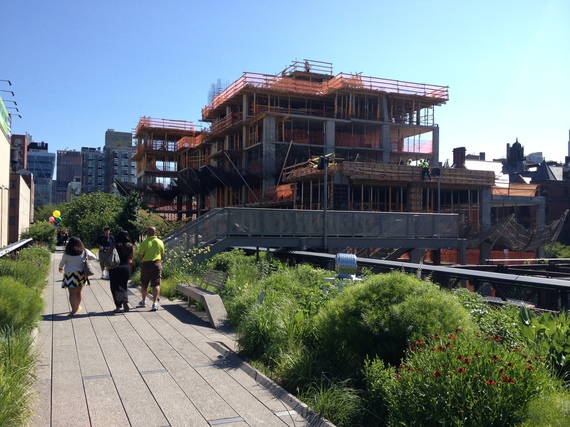 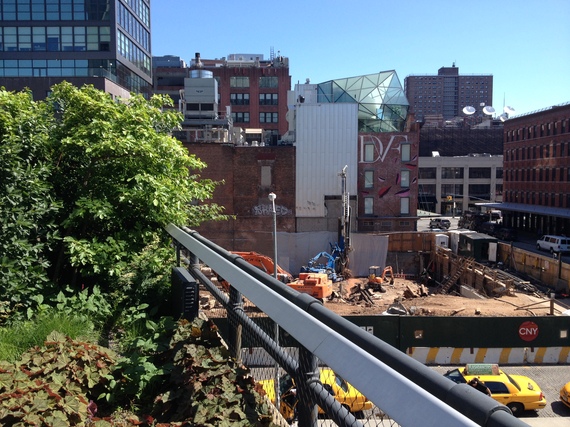 The High Line, unlike an avenue or boulevard, the type of civic expressions Olmsted employed, is increasingly more like an offshoot of the pont-maison, which Rudofsky describes as a "bridge turned city street." This is a centuries-old concept in which housing was developed parallel to and even cantilevered off the sides of bridges. For example, of the Old London Bridge over the Thames, Rudofsky writes, "As early as 1201 it was decided to erect houses along both sides of it; a fifteenth-century plan shows one hundred and thirty-eight shops, leaving a roadway only twelve feet wide." And, dozens of wooden houses jutted far out over the river. "By the sixteenth century, [it] was performing the role of a shopping center." Lost in the process was the bridge's chief by-product -- the view. 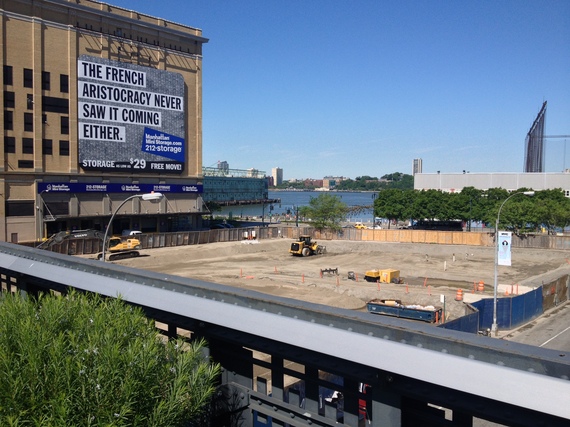 View of the Hudson River from the High Line with construction site in the foreground, June 2014. Photograph courtesy The Cultural Landscape Foundation.

This is not to say there is an absence of planning along the High Line (millions are being made on the sale of "air rights" and that helps regulate the height of immediately adjacent construction) -- and this is not a jeremiad about development nor what some call the "Disney-fication" of New York City. And, while the High Line is an extreme example of a development project that is an economic juggernaut, extremes are not the norms.

Nevertheless, the High Line is important to examine when discussing how we measure success in our public landscapes -- it has been deemed a success, in part because of the contiguous development it has spurred. Curbed New York reported last month, "Some of New York City's most celebrated architects and designers are engaged in a heated competition to see who can build the fanciest, most modern, and most outrageously expensive condos along the High Line, and the result is over a dozen very exciting projects that are either in development or nearing completion from the likes of Thomas Juul-Hansen, Kohn Pedersen Fox, Zaha Hadid, Lord Norman Foster, and others." 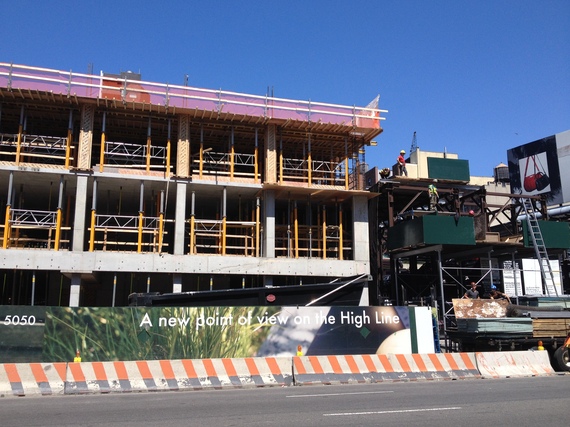 So how is change managed? In a 2012 interview, High Line co-founder Robert Hammond described the paradox faced in the park's design: "how do you keep what's magic but at the same time create something new?" In guiding the site's growth and evolution, are its stewards evaluating factors such as: "borrowed scenery" that includes the unrivaled views of the Hudson and surrounding cityscape; newly enhanced bird and insect migratory opportunities; and our own spiritual contact with nature in the city? Is the surrounding contextual setting that contributes to the High Line's spectacular cultural and environmental success about to be diminished? Is it fast approaching a tipping point?

I've written enthusiastically on numerous occasions about the High Line, which, while only five years old, is an excellent example of a public private partnership, is impeccably maintained, and an exemplar of balancing historic preservation and design. Over the long term, as the High Line continues to activate development along its boundaries, I also hope these edge conditions provide site-specific lessons about managing change -- not just through the lens of its historic context, but also its physical context.