When Katherine Perez arrived in the United States from Colombia in 2005, she had one goal in mind: to get a great education that would pave the way to a better life. Her parents made the tough decision to leave their country after her mom got a job offer in the United States, the "land of opportunity." Yet soon after settling in, the Perez family was met with a harsh reality: the attorney overseeing their immigration case had fled the country, their paperwork and savings in tow. 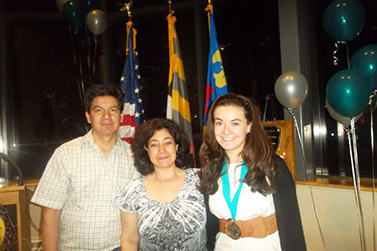 Despite this setback, the Perez family was determined to move forward. Little by little, the family worked to rebuild their lives in Maryland. While her parents worked, Katherine (pictured in photo, far right) poured herself into her schoolwork, taking honors courses in middle school and participating in the International Baccalaureate program at her high school. Though she thrived academically, her immigration status put her at an extreme disadvantage.

"I was very dependent on what my parents could help with and provide for me. [With] no money of my own, unable to drive and attend events and school programs--I felt as if everyone else my age was ahead of me, and I was falling behind every day more and more," said Katherine.

When the college application period rolled around, the legal and financial barriers multiplied. It quickly became clear that the road to a college degree would be challenging and extremely costly.

With help from supportive mentors, Katherine obtained a private scholarship that enabled her to enroll as a full-time student at Montgomery College and work toward an associate's degree. But economic difficulties at home meant she'd also have to juggle a part-time job to help support her two younger sisters.

As much as she tried, mounting pressures from school and work often led Katherine to question whether her degree was worth the hardship. Would the barriers of being undocumented ever be lifted?

On June 15, 2012, she got her answer by way of President Obama's announcement of the Deferred Action for Childhood Arrivals (DACA) program. Though initially hesitant, Katherine set her fears aside, submitted her application, and hoped for the best.

"I have a job and I am in the process of getting my driver's license. I can now save money to pay for next semester and help out at home with the expenses. I feel more empowered and in charge of my life," said Katherine.

Though these stories echo the power of DACA, they also echo the voice of an immigrant community eager to contribute to the progress and prosperity of the nation. Eager to prove the narrative of the American Dream is alive and well, and within reach. Katherine would like to remind those in Congress seeking to repeal DACA: "Even though we were not born in this land, we have grown to love and respect the national symbols, and to pledge allegiance to the flag. We are here not to bleed out the country, but to make it a better one and to contribute to [its] well-being."