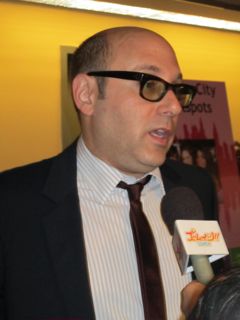 Sex and the City's Stanford Blatch

It was opening night for the long-awaited Sex and the City 2. Since I was in New York, where Carrie, Charlotte, Miranda and Samantha frolicked in style, it seemed fitting to spend the evening on the Sex and the City Hotspots Tour from On Location Tours before going to the midnight show. After all, New York is the city that doesn't sleep.

On May 26th, the tour company created a special Midnight Madness event taking Sex and the City fans to over 40 locations throughout the city, where both the TV show and films were shot. The tour included meeting the show's cast member Willie Garson, best known as Stanford Blatch in the series and film.

Our tour guide was as knowledgeable as a Sex and the City encyclopedia, if one did exist. She started by asking how many Samantha's were on the bus. Only one person raised their hand. It appeared most women thought they were Carrie or Charlotte, or a combination of the two.

We started in front of the Plaza Hotel, where Carrie had said goodbye to Mr. Big in a scene based on the film The Way We Were. We drove past several locations that one could not forget, including Trey and Charlotte's visit to Tiffany to pick out her diamond engagement ring.

We had the opportunity to jump off the bus and stop at the Pleasure Chest, where Charlotte bought her first "rabbit" and the trendy Buddakan, the location for Carrie and Big's rehearsal dinner for the wedding that wasn't.

It was a hot and humid New York evening, so I was thrilled to stop for a signature Cosmopolitan at O'Neals Grand Street Bar in Little Italy, known as Scout in the television series.

On the tour, we learned the following:

We also learned when Aidan was going to be written out of the series, fans and loyalists around the world sent furniture made out of toothpicks and popsicle sticks to HBO and said, "Please don't let Aidan go out of business"

After dinner, the highlight was meeting Willie Garson, who played Carrie's best male friend, Stanford. Willie had just gotten off the phone with Sarah Jessica Parker who was in London for the film's premiere in the UK. Before introducing the film to the crowd, Willie shared with us his thoughts about Sex and the City 2.

"It's more, its different and it's really funny," said Willie. "The last one got a little dark," he added. "We were catching up with the characters. The global economy is bad."

I asked the Sex and the City star who came up with the term "broom," a combination of bride and groom, during the gay marriage wedding scene. Willie replied with, "Michael. We have the best writer in the business. If you asked him right now he'd write ten more movies. He's so smart." I have a feeling there will be many more brooms in days to come.

Willie added, "There's a funnier line in this movie, but we can't say it on television. It's Kim's line about the guy in the desert. My God is that a funny line."

Of the two weddings, one in the first film and one in the second, I asked him which was his favorite. He replied with, "Oh, wow. That's hard to say. We don't have favorites in Sex and the City. It's all one story about these ten people."

In real life, Willie has been a friend of Sarah Jessica Parker's for 25 years. They talk almost daily.

He described the Sex and the City Hotspots tour like going to see your best friend's life. "Fans want to see their friend Carrie's house, where Aidan makes furniture, where they got married. That's why the tour is so great," said Willie.

On Location Tours is having a special Sex and the City Hotspots Movie Package event on Friday, May 28th in New York, which will include their signature tour, a viewing of the film, and passes to the club Marquee for dancing. For tickets and information on all of the tour packages, including The Charlotte, The Miranda, The Carrie, and The Samantha, visit Sex and the City Hotspots or call 212-683-2027.


More:
Willie Garsonsex and the city 2 SATCStyleSex and the City
Newsletter Sign Up
An essential daily guide to achieving the good life
Subscribe to our lifestyle email.
Successfully Subscribed!
Realness delivered to your inbox