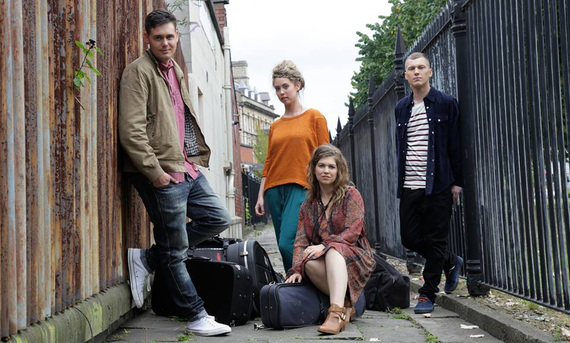 Calan. Used by permission of Calan.

Take your pick: Welsh music is either the poor stepchild of the Celtic world, or its best-kept secret. It's less mainstream than the Irish and Scottish scenes, and less of a novelty than Breton and Galician music. Ask most American "Celtic Music" fans to name a Welsh band, and you're lucky if they can come up with a group from the 1970s or '80s. So I was glad to see a whole contingent of Welsh musicians showcasing and schmoozing at the Folk Alliance International in Kansas City. (Last year's meeting featured at least one Welsh band too!) I thought I'd share the best Welsh music I brought away with me. Let's begin with a video of the most accessible Welsh band I met there, Calan:

If there's a general criticism often aimed at Welsh music, it's the music's formality or lack of spontaneous energy. Calan dispel that notion with Jonah, an eclectic recording of passionate high-energy songs and tunes. They open strongly, with a powerful set of slip jigs led by the Welsh bagpipes of Patrick Rimes. Other tunes range from morris dances to hard-driving fiddle and accordion polkas. Most of the songs are in Welsh, and include both traditional and original numbers. Singer Bethan Rhiannon has a lovely voice used to perfect effect on songs like "Y Gwydyr Glas." I'm not as crazy about the synthesized voices singing harmony on "Paid â Deud," but the chords themselves are unusual and make for a pretty cool track. The version of the group I've seen is acoustic, but the CD is definitely more akin to the video above: electric folk, complete with a full rhythm section. Not surprising: the producer is Maartin Allcock, best known as the former string wizard with English folk-rock pioneers Fairport Convention. (That's Maart on bass in the video above.) Another Fairport-influenced touch is the folk-pop ballad "Jonah," which is in the vein of Dave Swarbrick's classic "Rosie." Meanwhile, the 1930s-style original jazz number "Anybody Else But You" might bring to mind Pyewackett. (These last two sound like visitors from another album, but they're both very good songs.) In general, the arrangements show a lot of attention to detail: occasional brass instruments for variety, vamping harp fulfilling a piano's usual role, and many other flourishes small and large. This, along with Allcock's production and sequencing, keep the overall sound and texture changing constantly, always a challenge for bands like this. The result is certainly one of the most interesting and enjoyable Welsh folk albums of the last few years. 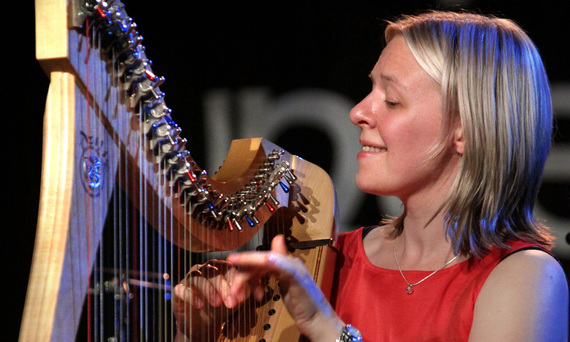 Maartin Allcock also produced Cerdd Dannau, the third album by Gwenan Gibbard, one of Wales's best singers and harpers. Cerdd Dannau succeeds as crisp, contemporary Celtic music outside the usual box of jigs, reels and ballads. Gibbard based the album on an iconic Welsh musical style, Cerdd Dant, the singing of poetry to harp accompaniment. Cerdd Dant doesn't coincide with most notions of "folk," "classical" or "pop"; while either the melody or the words may come from folk tradition, they can also be written by local amateurs or by professional composers and poets. It has some pretty strict rules, the most basic of which is that the harp plays a melody while the singer sings a counter-melody. Here's an example from the album:

Cerdd Dannau is not a strict presentation of Cerdd Dant, though, and features some expanded full-band numbers as well as simpler harp-and-voice tracks. The texts range from old folk poetry (such as short gnomic pieces called englynion) to well-known poets and songwriters. Two pieces are by J. Glyn Davies, an august professor of Irish and Welsh who also wrote books for kids based on sea songs and shanties he had heard a child; one of his songs is silly and lighthearted, the other filled with what the Welsh call hiraeth, or intense longing. There are contemporary anti-war verses by Dafydd Iwan, and a song on the importance of language and identity by Owain Siôn and Ifan Prys. The music is similarly diverse, from folk tunes to pieces composed in the 1930s, the 1980s, and the last few years. In some cases, as on "Nid yw Cariad yn Ddall" (a traditional melody with words written by the famous harpist Nansi Richards), the melody and counter-melody are in different but compatible time-signatures, which sets up rhythmic tension and gives the words added urgency. Gibbard's voice and harp are beautiful throughout, but the album is also notable for fresh and modern arrangements; Gibbard plays piano and accordion in addition to harps, and Allcock adds guitars, bouzoukis, banjo, bass and various production effects. Guests add occasional fiddle and flute, and pop singers Cerys Matthews and Meinir Gwilym contribute edgier vocals to several duets. It all goes together seamlessly for a lovely listen! 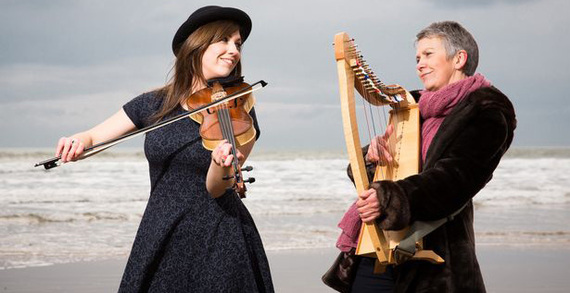 Many years ago, I reviewed an excellent harp album by Delyth Evans in the magazine Dirty Linen. She now goes by her married name, Delyth Jenkins, and tours with her daughter, fiddler Angharad Jenkins, under the cleverly polysemic name DnA. Their CD Adnabod conveys an impressive range of feelings for harp and violin instrumentals, including a cheerful set of dance tunes to open the disc, wistful pieces like "Cassie en Lorient" and "Brandy Cove," and more dramatic melodies such as "Can y Llesioniaid" and "Sosban Fach." About half traditional and half original, Adnabod is sure to have some fun music you've never heard before, even if you're a Welsh folk music expert. Both mother and daughter are skilled and sensitive musicians, and the disc never fails to deliver interesting tunes in appealing arrangements. Especially impressive are the various effects Angharad coaxes out of her violin beyond the conventional fiddle sound. Guitarist Jim Evans and vocalist Lleuwan Steffan add their talents to one track each, contributing variety to an already enjoyable album.

Olion Byw, another duo, has a name that translates to "Living Traces," suggesting past traditions in the modern world. That's what you get on their second CD Mudo/ Migrating: mostly old songs and tunes with some new ones mixed in, all done in a lively contemporary manner. Olion Byw is Lucy Rivers on fiddle and vocals and Dan Lawrence on guitar and mandolin. They deploy their instruments with subtlety and style, and guest percussionists add further variety. Rivers's singing is resonant and haunting on songs that include chestnuts I remember from my old LPs of Ar Log ("Bugeilio'r Gwenith Gwyn," "Ble 'Rwyt T'in Myned?") as well as many that are new to me. The tunes include slip jigs found in eighteenth-century manuscripts, airs and dances learned from friends in Wales and Brittany, and a few composed by the band members. Whether on tune or song arrangement, the fiddle and guitar weave around each other in the classic interlace you hear in the best Celtic music. Where the mandolin leads, it adds lift and lightness. It all adds up to a delightful recording, simple yet substantive, revealing living traces of the Welsh past. Here they are performing a Welsh classic: