My apartment in Paris is filled with chairs: chairs tucked in little corners, posed in front of cupboard doors, chatting together in corners, pushed up against walls in a row, stacked, draped with blankets, the older ones elegant in their decrepitude. They are having a strange effect on me, both tonic and narcotic. 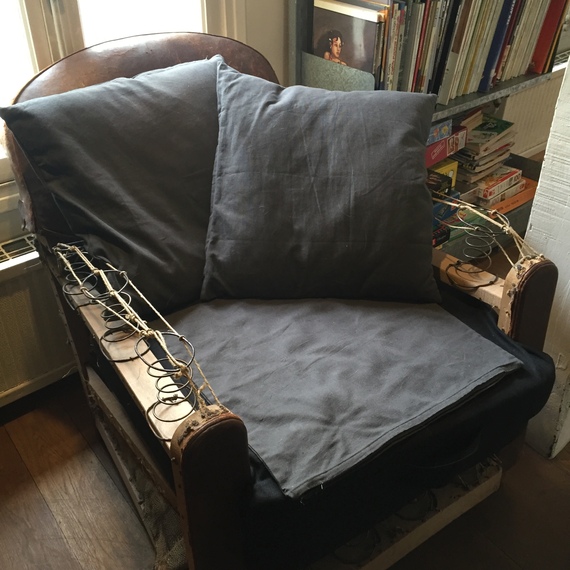 Why am I even here? We've come to Paris for two months ... because ... well for no reason in particular, except that life is short.

For me, too, it's an opportunity to recapture some of my French language memory. My first schooling was in French. My parents sent me to "L'École Française" starting with nursery school and continuing through my first grades. When I was eight years old we lived in France for a year and I was a "petite Française", my French indistinguishable from my classmates at the one-room village school I went to out in the countryside of the Loire Valley. Years have passed since then. Do I even want to admit how many? Have I reached the age when I don't want to tell? Forty-one, to be precise; years since I was that petite Française. Yet some of my French has stuck with me, despite a regimen of complete neglect, punctuated by sporadic short forays into French classes.

It feels like a daunting task to know what is the right way to spend my limited time here. But then again, yes, I'll say the obvious; I know that's really no different than every day. I promise myself I'll make lists of possibilities, that I'll analyze and prioritize; instead I poke my finger in the air, feel the breeze and let it take me. 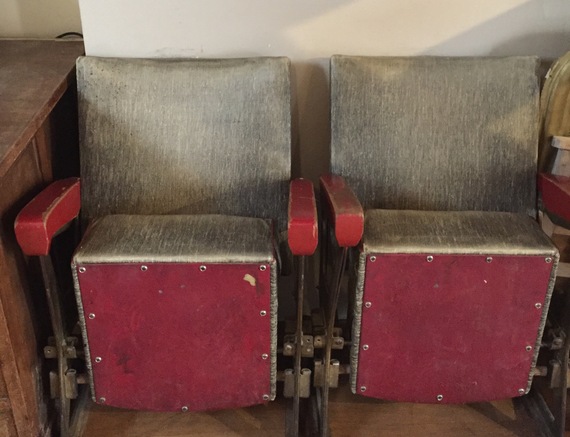 I started with a weeklong theatre workshop, which acted as an audition for a daily so-called professional theatre class, on the theory that the full French immersion will act as a form of language shock therapy. It is. Engaging with Hugo, Molière, Musset, Racine, Marivaux and friends keeps me high on my toes, as a swirling vortex of words and phrases flow past me, and every once in a while, the flow eases its pace, I gasp a lungful of oxygen and the incomprehensible is illuminated. By comparison, the class banter and the instructors' commentary are clear. Sometimes I experience a slight delay in comprehension, as my brain rewinds and adds meaning from context, in a jerk-step sort of silent film time lapse translation. Every day is intense and rigorous, as I struggle to stay abreast of the work required, texts read, understood and memorized, new styles and techniques learned, self-tested and deployed.

I go to movies by myself, anything French, or with French subtitles. American or English films I save to see with my partner. He goes away for 5 days and I see five movies, two French, one Moroccan, one Japanese and one Korean. Plus two plays. I'm forcing my brain into French. I read a novel in English, but decide that I will only read in French while we are here. Maximum immersion.

And we simultaneously explore and just live--finding the best pet store for our cat's needs, our preferred neighbourhood boulangerie and cheese store, the purveyor of gourmet treats like jars of chestnuts, fresh wild mushrooms and cans of Portuguese mackerel wrapped in patterned brown paper, the alley that acts as a shortcut away from the busy streets. Arriving at an aerial yoga studio I've never been to the other day, I pushed open the giant wooden door of the apartment building, only to find a signature Parisian, interior hidden courtyard, shaded by a giant tree, in the corner one of the small trees peacocking its autumn orange leaves,. The next night I rode home along the Seine from a late afternoon matinee at the Théâtre Du Champs Elysée, on a Velib (Paris' bike share system). Crépuscule. That's the French word for that light of dusk, just as the sun has almost fallen. That moment just before obscurity, when everything is illuminated with the clarity of a hallucination, a fleeting vision of truth. Crepuscular. The Eiffel Tower ignited. A moon, fat with brioche and croissant and baguette and cheese, hung in the navy-blue-ing sky. And everything glowed--the white brick, the verdigris, the gold on the Pont D'Alma's ornate statues, the pale gravel paths of the Jardin des Tuileries, glimpsed through the curtain of trees and leaves. The air was crisp, autumn nodding its head in winter's direction.

All of this is fresh and enthralling, of course, but it is the apartment that acts on me most strongly. Perhaps because it is the place I come home to, with all that that idea of home entails, and yet it is the most unfamiliar and strange aspect of our sojourn here. Like entering a chock-a-block antique store, hidden at the end of a cobbled lane, the apartment has, for me, a magical quality.

Six flights up, stairs so worn as to have become almost algorithmic in their height, slanting inward at the top of each spiral as the stairs crest at a landing. The front door only opens with a good shove of shoulder and hip, so that every entrance is a precipitation into the space, where you are greeted by a step up, or down, depending on whether you are coming in or going out, but in either direction creating a real danger of tripping or worse. Inside, three floors perch precipitously one on top of the other. Cozy ceiling and small windows at head height on the first floor, chairs, desks and bookshelves crammed with everything from art and design, classic and contemporary literature, to boating and graphic novels. In the corner a full size mannequin, naked but for her red knit hat and a Je Suis Charlie t-shirt (referring to the attack on the Charlie Hebdo offices). The second floor is brighter, a bank of old glass doors leading out to a narrow balcony, verdant with a dense, haphazard collection of flowers and herbs and small trees. More random objects include, the broken bits of an oval picture frame, a wire dress form, with a feather duster head and variegated stacks of ashtrays. Finally, up a rattling spiral of metal stairs, a pocket-sized bedroom and bathroom under the eaves, a narrow door leading out to a pint-sized roof deck. From our windows we see the St. Eustache church. The bells chime the hours for us, and a single bell rings the half-hour, beginning at 7:30 a.m. and ending at 11 p.m. or 23h, as it is here. 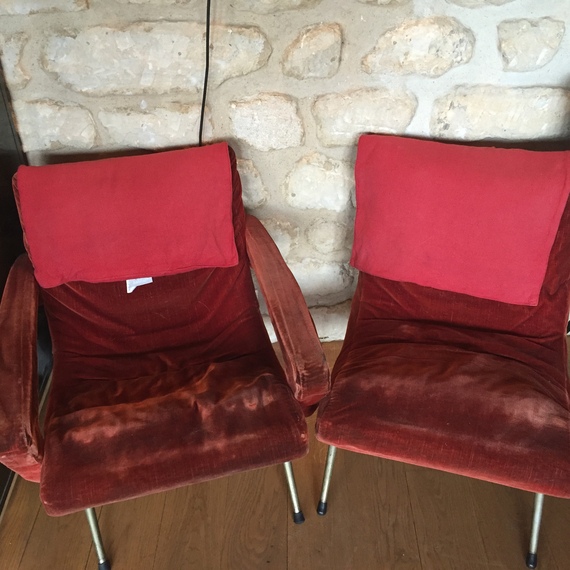 But it's the chairs I wanted to tell you about. Of all the elements of the apartment it is they who have cast the strongest spell on me. A leather armchair with bare arms, missing their upholstery and stuffing, left only with their naked metal springs held together by twine. Two more of the same leather armchairs, somewhat less advanced in their decrepitude, the leather all but peeled off the arms, over each of which is draped a small blanket. The seats are wrapped in checked flannel, and one seat lists sideways so much my cat refuses to sleep on it. Two elegantly slouched burnt red velvet chairs, one with arms, one without. Two theatre seats, folded. Five rickety wooden chairs, with round wood seats and curved wood backs, two of which we use as bedside tables. Five green pleather kitchen chairs, with splayed metal legs. Four green wood and metal folding café chairs, outside on the balcony and roof deck. A cornucopia of orphans, including a high barber's chair, a circa 1970's plastic office chair, with bright orange detail and several pleather upholstered chairs in red, and green and white, with metal legs. And I haven't yet mentioned the two green pleather diner banquettes, and the two small leather couches with pull-out sleeping, one traditional rounded and puffy men's club style the other more modern.

There is something about this apartment, its chairs, that breaks me apart, pulls me outside of my self. At home I prefer neat and spare whenever possible. I am neither a hoarder, nor a collector. Plunged into the eclecticism and eccentricity of this apartment, in a city I know as an acquaintance, in a language that is an old friend of my soul, but with whom I have long since lost touch; I feel unmoored, fluid, full of possibility (and at my age!, which I won't repeat). I'm still me, of course, but a me who has melted just enough to flow into new corners and crevices, spaces of curious delight that were previously inaccessible.

There's no one thing. No big thing. Rather, it is small incursions into my usual sense of order, the parameters and structures, the signposts of self. I eat more, exercise less and don't fret about it. I stay up later and sleep later. I, who have not even drunk so much as a coffee since I was eighteen, drink espresso, which makes me laugh all afternoon. All of this ... this feeling is nothing more than a lightness; not an elimination of adversity, but a renewed simplicity, a pleasure.

More:
FranceFrenchparisHappiness pursuit of happiness
Newsletter Sign Up
An essential daily guide to achieving the good life
Subscribe to our lifestyle email.
Successfully Subscribed!
Realness delivered to your inbox