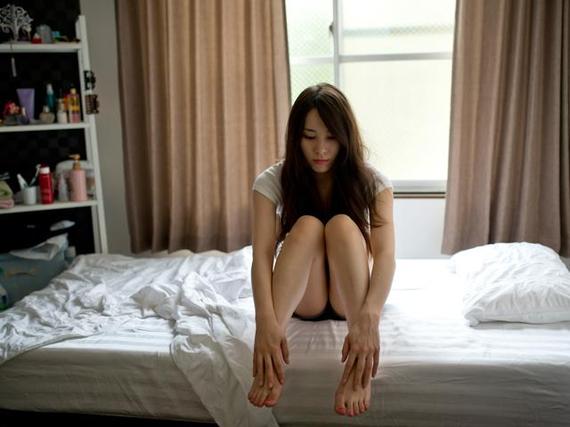 Despite writing deeply personal stories about my life struggles, from dealing with prejudice to PMDD, it has always been challenging to openly share two key factors in my life: depression and anxiety. My mother has an anxiety disorder and depression runs in my father's family. I was lucky enough to inherit both.

My anxiety started to manifest itself while dealing with school during my preteen years. Everything from completing tasks to bullies affected my psyche, varying from small things such as needing to write a sentence in the same dotted notebook line or else I would get an anxiety attack, to easily bursting into tears whenever I had to deal with negative interactions from my classmates.

The anxiety only increased in high school when I had to deal with bigger issues. I often felt like I couldn't focus in class because I knew that math and science were not my thing, causing me to constantly feel frustrated with myself. I felt like I wasn't able to handle my classes and often gave up, thinking that no matter how hard I'd try, I'd still fail. Being bullied throughout high school was an additional stressor.

Being in a Mean Girls-esque all-girls school often made me feel like I was inferior to my classmates and I was always reminded that I wasn't worth anything, from dealing with cattiness to the occasional death threats. I would often have trouble sleeping due to not being able to mute my thoughts. It was a cycle of constantly thinking about all the issues I was dealing with and feeling like I was the only one experiencing this.

Although I experienced symptoms of depression throughout my preteen and early teen years, I didn't experience a depressive episode until I was 16. As I've written before, I entered a relationship with an older guy who took advantage of my insecurities and my desire to not be alone. Throughout the relationship, he threatened to end his life if I left him and would constantly be manipulative, making me feel like a prisoner within the relationship. I was far too young to understand how to deal with it.

While I was able to leave the relationship, I still felt like I was damaged. I didn't have enough energy to do basic everyday things such as showering, brushing my teeth, or even eating. I barely could move from bed and felt numb, yet replayed harmful, self-loathing thoughts. I didn't want to kill myself but I often fantasized about ceasing to exist.

I was able to get help and battle my depression, but that hardly means it disappeared. Depressive thoughts often came up throughout my life afterwards -- and still do. The current biggest trigger is my PMDD, but I have experienced depressive episodes afterwards as well. The worst recent one was in late 2014 when I was studying abroad. I had hoped that living in the city of my dreams would increase my happiness and diminish my issues with both anxiety and depression. However, that wasn't the case. Shortly after I began my year in London, I experienced losing an internship and my job during the same week. As someone whose life revolves around work, it hit me hard. I started to feel the same symptoms as my first time dealing with a depressive episode.

I lost all my energy and drive, causing me to stay locked inside my dorm room for days. I wasn't attending my classes and I couldn't eat without feeling nauseous. All I could constantly think was how much of a failure I was, even if that was false. At one point, I called the London Distress Centre, but hung up after not being able to muster the energy to speak. At the time, I was also experiencing panic attacks multiple times per day. Explaining a panic attack to someone who has never experiencing one is difficult.

The best way I can describe it is as a dementor's kiss from Harry Potter (it's no surprise that they're a symbol of J.K. Rowling's own struggles with depression). They start off with chills and shortness of breath, similar to the sensation of drowning. It affects my vision; sometimes it feels like everything just goes dark. Sometimes panic attacks make me bawl hysterically, yet at others I barely can shed a single tear. The thing about panic attacks is that sometimes the simplest thing can trigger them, especially if you're in a vulnerable state. They're absolutely terrifying.

Not having a therapist while abroad made it even more challenging to get through it. I was forced to figure out on my own how to make care of my well-being and find a way to feel "normal" again. My way of coping was making big changes in my life. I decided to focus on other work instead, which lead to becoming one of the editors of Bitchtopia. I also changed my friends, surrounding myself with like-minded, supportive people. Soon after making those changes, I had my life back on track, or at least on the surface it was much better.

Even though I haven't experienced a severe depressive episode since then, I still deal with anxiety and depression regularly. Throughout the past year, I have accomplished some achievements that I didn't know were even possible before, from being accepted into a graduate program at my dream school to even being able to share my experiences here. I've had people say to me that I shouldn't have anything to worry about anymore, but that's not how anxiety and depression work. There is no off switch.

It's a struggle that affects my life tremendously. I don't think I've ever experienced a day in my adult life without worrying about when things will go wrong or overthinking my interactions with others. Anything can easily trigger anxiety attacks (which are less intense than panic attacks), from changes in my daily routine to intrusive worries about losing family members.

People who suffer from depression and/or anxiety deal with the stigma of being seen as damaged. It's surprising that this stigma continues, considering how approximately 14.8 adult Americans have a Major Depressive Disorder and 6.8 million have a General Anxiety Disorder. In fact, most--if not all--of my friends suffer from either anxiety or depression (or both). It's about time we started discussing both openly, leaving judgment behind.

If you -- or someone you know -- is struggling with symptoms of depression or anxiety, please reach out to your doctor.