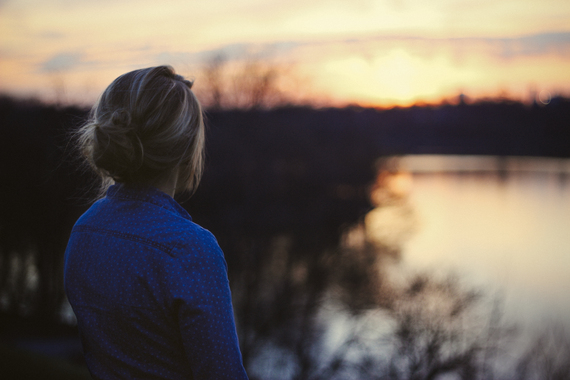 I'm approaching the age of 30. I have a fiancé, a dog, a growing career, a passport full of stamps and a healthy social life. Oh, and I have emetophobia.

My emetophobia, which is a fear of vomit, often feels like it controls my life.

Phobias affect 8.7 percent of people in America, and here in Australia, figures are similar. I'm one of the ones who drew the short straw. My fiancé and best friends fall in the lucky group -- they are part of the majority who don't suffer with a debilitating disorder. They are sympathetic to my irrational fears, but they can't empathize because try as they might, they don't understand what it's like to have your thoughts consumed by fear every. single. day.

Let me paint a picture.

I've suffered from this affliction as long as I can remember. As a child, if anyone in my family had so much as a stomachache, I would quarantine myself in my bedroom. Leaving only when forced, I'd tie a scarf around my face to protect me from their germs like a homemade biohazard suit. While my partner is seemingly immune from stomach flu, he's been known to have a chat on the porcelain telephone after one too many alcoholic beverages. When there's even a chance he's had too much to drink, he's relegated to the sofa, and I spend the night in sleepless terror, blankets over my head and earplugs in my ears to block out the possible sounds of retching.

This is because my fear is not limited to vomiting myself. I'm equally afraid of seeing someone else vomit, if not more so. If you were in the room with me right now and started gagging, I would be out of my seat before I even realized what was happening. If my escape route was blocked, I'd end up with fingers stuck in ears and eyes squeezed shut, on the verge of a total breakdown.

I think it comes down to control. I can't control if or when another throws up. At least with my own nausea, I can try to fight it. Oh, and I fight it. The last time I threw up was Boxing Day 1996, when 22 of 24 family members under one roof contracted a vicious stomach bug at the same time. Recently, I had a panic attack which resulted in overwhelming nausea. I fought it for over an hour before a few utterly terrifying dry heaves. I'm still recovering from the trauma, and it was almost a year ago.

I will go to any length to avoid experiencing or even witnessing vomit.

My handbag would make an emetophobic Mary Poppins proud. I rarely leave the house without antiemetics, antacids and peppermints. I carry airplane airsickness bags, just in case. I always carry headphones so if I ended up near someone who looked like they might get sick, I could tune out the sound.

I am so scared of salmonella that I cook chicken at least five minutes past burnt. Eating out in restaurants, I worry about whether they've taken proper steps to avoid cross-contamination. I won't take public transit at night, because drunk people take transit and sometimes drunk people get sick. While I would happily shell out any amount of money to treat an intoxicated friend to a cab, I'm never the "designated driver" -- the panic I'd experience would make me legitimately unsafe on the road. I even avoid walking past the spinning rides at theme parks in case I happen upon someone with tilt-a-whirl induced hurling.

Ironically, I work in a hospital in an office on the oncology ward, which does make me wonder if I'm some sort of emotional masochist. Luckily, because the vomiting that occurs there is treatment related and therefore not "catching," I can walk through the door each day. However, if someone with a hospital-issued sick bag in hand is in the lift when the doors open I will always wait for the next one. Being trapped in a confined space with someone throwing up is literally my worst nightmare. Just typing it made my heart race and my palms get clammy.

I do realize how completely irrational this is. It was over half of my lifetime ago that I vomited, and yet the fear is relentless. Still, I have it better than some emetophobes. In My Age of Anxiety: Fear, Hope, Dread, and the Search for Peace of Mind, Scott Stossel indicates that many emetophobes are so terrified of vomiting that they can't even say the word "vomit" for fear of jinxing themselves. While I still have to close my eyes during vomit scenes on TV, I no longer have to plug my ears at the same time. It's embarrassing that this feels like an accomplishment, but it's the truth. I can even enjoy the occasional funny vomit story -- the fact that I can admit there is such a thing kind of means I'm not a total lost cause, right?

Most people are familiar with some of the more common phobias, like flying, public speaking, small spaces, and spiders. Emetophobia, on the other hand, often doesn't feel like it is recognized as a legitimate fear.

My supportive family and friends help to keep my vulnerable self from slipping into an agoraphobic and depressed mess. And yet, while they mean well, they sometimes miss the mark. Not so long ago, a friend me emailed a link to an article about emetophobia. She'd added a message to say, "Look -- it's actually a real thing!" I felt crushed -- did she think I'd been making it up? Of course she didn't mean it like that, but it still hurt.

However, if reading about emetophobia was what it took to legitimize my phobia to her, maybe I can open someone else's eyes to this debilitating fear. It's real, it's irrational, and it's completely terrifying. If this helps readers to treat an emetophobic friend with more compassion and understanding, or shows one emetophobic reader that they're not alone in this struggle, that's enough for me.

In real life and online, my words are often followed by exclamation points!