For the past 26 years, Beverly Buchanan's Hasting's House (1989) has stood on a shelf in my loft; nearby, the legend that Beverly wrote for the art work:

Brunson Earthly Hastings lived by the rules of hard work, no liquor, and one woman. His 10 sons were smart, hardworking farm boys but Anna, the only girl, was his heart. He was blind when she graduated but smiled proudly when he heard them call out DR. HASTINGS, to her.

Illuminated every night by a vintage lamp and protected from the elements by the centennial building's pressed metal ceiling, the wooden sculpture of a shack with its tin roof (19 ½ x 9 x7 inches) is a powerful visual reminder of my visit with Beverly in Athens, Georgia in 1994. Beverly was quite ill when we stayed in her home (she had difficulty breathing and there was some sort of oxygen machine in her home) but that did not stop her from driving me and my husband, Shael Shapiro around in her pickup truck, on the hilly back roads of rural Georgia, to see the folk art of her friend, Reuben Miller. I vividly remember pulling into Miller's driveway, a sea of his metal whirligigs turning in the wind. We bought several of Miller's pieces, a red devil cut out of tin and a bicycle wheel whirligig with fins and a dinosaur cut out of sheet metal, resembling a weather vane, which, ever since has spun ferociously on my windy SoHo roof.

At the time, I was there to interview Beverly for a catalog essay that was to accompany an upcoming exhibit at the Steinbaum-Krauss Gallery in SoHo. The group show was entitled, Memories of Childhood and my piece on Beverly Buchanan focused on words and images: "Crossing Over: The Artists as Writer-- Which Comes First: Words or Images?" Beverly was clearly a story-teller and I was curious: Were her tales about the inhabitants of the shacks she created, entirely fictional? What experiences had she drawn on to create this work?

The visit to Athens was full of surprises. First, there was her biography, not the one I expected from a female artist who made shacks. Beverly was raised by adoptive parents, her great aunt and uncle Marion and Walter Buchanan, in South Carolina where Walter Buchanan was the Dean of the School of Agriculture at South Carolina State College at Orangeburg, then the state's only public college for African Americans. It turned out that Beverly most certainly did not grow up in a shack, living instead on campus in a very comfortable home which had two bedrooms, a separate kitchen and dining room, and a long porch that Beverly told me was the place where she used to roller skate.

Her exposure to shacks came through Walter Buchanan who often visited farms in his role as an educator. This was where Beverly saw how farm families actually lived and it made a lasting impression. While she had an indoor toilet in her own home, she was struck by being able to see the sky in between the boards of an outhouse. With her father, she often spent the night in the farmer's modest dwelling.

Although Buchanan sketched and made things all her life, using leftover stuff as she called it, she was at first bent on a career in the sciences. She earned a BS in medical technology from Bennett College in Greensboro, North Carolina and then successive Masters Degrees from Columbia University in 1968 and 1969 in Parasitology and Public Health. After that she worked as a Medical Technologist for the Veterans Administration in the Bronx and as a health educator for the East Orange, NJ Health Department. During this period, she thought that she would become a doctor and she applied to and was wooed by several medical schools.

I thought about Beverly's aborted medical career when I re-read the legend for Hastings' House. Was Anna Hastings' story a foil to Beverly's? Beverly who never did go to medical school and ANNA, the "only girl, Brunson Earthly Hastings' heart," who graduated as DR. HASTINGS. Anna's title in my legend is in all caps, an indication, undoubtedly, of the prestige of her becoming a professional, a reminder that a shack dweller can become a future doctor, professional, artist, or entrepreneur. If a shack somehow reflected the personality of the shack dweller, then, perhaps my shack reflected Beverly's life, too.

What changed the direction of her life was enrolling in The Art Students League in New York where she studied with the painter Norman Lewis. By 1977, Buchanan quit her job in East Orange and declared herself a full-time artist. Three years later, in 1980, she received a Guggenheim fellowship and a National Endowment for the Humanities Fellowship in Sculpture.

Over time, Beverly shifted locations to Macon and Atlanta -spending more of her life closer to her southern roots. She rekindled her love of vernacular architecture, the outbuildings, farm houses, and shacks that she had seen as a child. When I visited her in the 1990s, she was living in a big old house in Athens, not far from the University of Georgia, with her friend Patti Phagan, a curator of prints and drawings at the Georgia Museum of Art.

Owning Hastings' House has had a strange effect on me. I've spent years imagining the lives of the Hastings family, the story spinning out of control beyond Beverly Buchanan's legend. Hard work, no liquor and one woman, yes, but it was Anna's mother, who was the real hero in my tale. She stood in the doorway, her apron fluttering in the breeze. She taught herself to read and she saved pennies to send Anna to school, convincing her husband that a girl needed an education more than a boy.

Wonder what Beverly would have thought of this version? 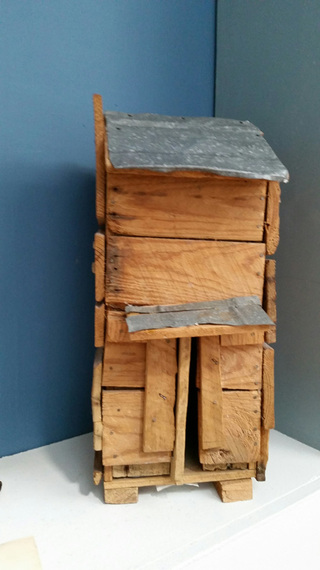 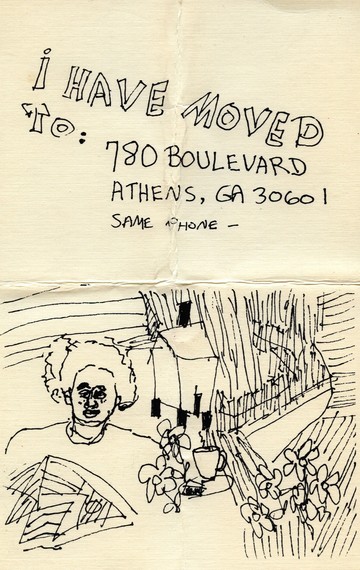 I Have Moved--Note from Beverly with drawing 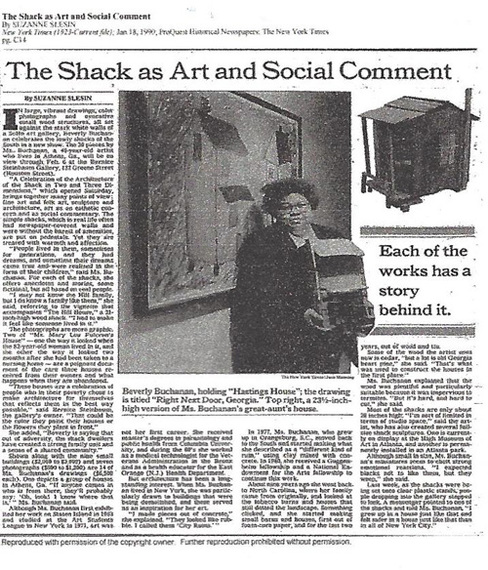 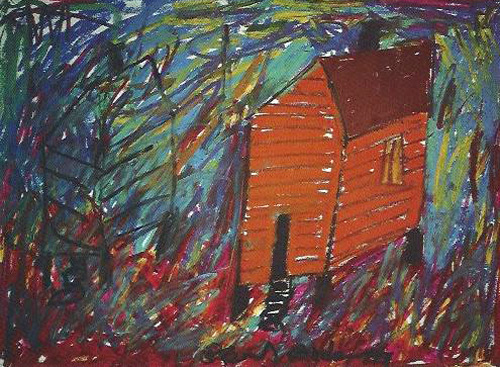 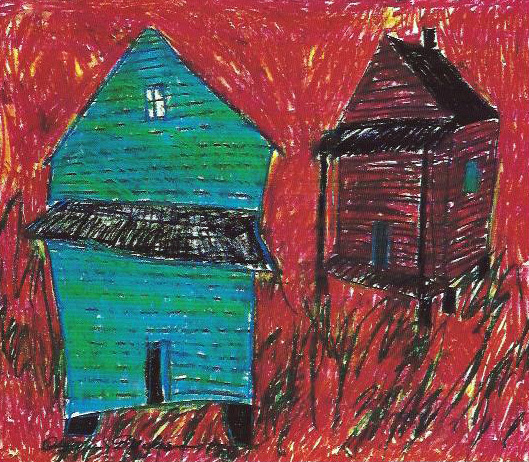