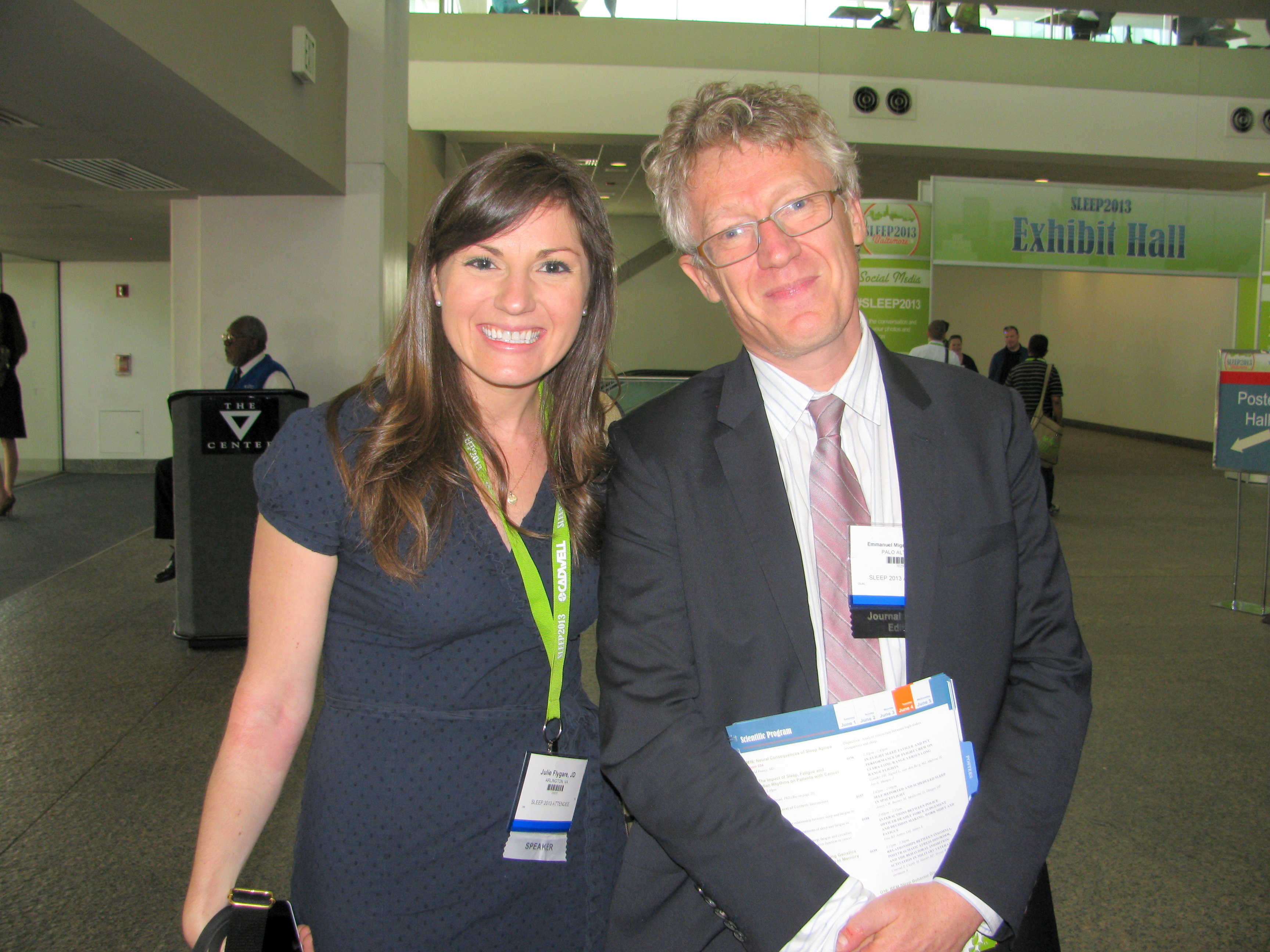 Julie Flygare and Dr. Emmanuel Mignot at the SLEEP 2013 meeting in Baltimore.

On a recent trip to San Francisco, I boarded a train headed south to Palo Alto to visit the Stanford Center for Narcolepsy. As the train whizzed through the Bay Area, I reflected on my long and unexpected journey to arrive at this point.

In 2005, I awoke one night to a burglar breaking into my apartment. I'd recently graduated from Brown University and moved into my first "grown up" apartment with a friend in Boston. On this evening, a man in a dark brown hoodie approached me with his arms stretched out toward my neck. I squirmed to get away, but couldn't move. My body was unresponsive, as if wearing a straitjacket.

A few minutes later, I could move again and sat up abruptly, my heart racing with adrenaline pumping. Where was the intruder now? The apartment was silent and all the windows and doors were securely locked. I went back to sleep, confused.

Later that year, I was laughing with a friend about a joke when my knees buckled slightly, as if someone had poked behind my knees. The weakness felt dramatic inside but passed quickly before I was sure what had happened.

This strange momentary weakness began happening every few weeks and started affecting my arms and neck as well. More emotions brought it on -- like annoyance, sexual pleasure, and surprise.

In the fall of 2006, I entered law school, excited for the academic challenges ahead. Before long, I was struggling more than I'd imagined, unable to stay awake in class and while studying at night. Where was my strong willpower?

One morning toward the end of my first year of law school, I awoke in my school's parking lot, unable to recall arriving there. I'd driven just 15 minutes in the morning after getting nine hours to sleep.

"Maybe I have a sleep problem," I said to myself for the first time.

By this time, burglars and other realistic night visitors invaded my sleep regularly. My body continued collapsing with emotions and had gotten worse. Now, I was falling to the ground for a minute or two, paralyzed and unable to speak or move, but remaining conscious and aware of my surroundings.

I learned that cataplexy was a symptom of narcolepsy. Other symptoms included excessive daytime sleepiness, hypnagogic hallucinations, and sleep paralysis. Excessive daytime sleepiness offered a possible explanation for my difficulties staying awake. My realistic nighttime burglar experiences sounded a lot like hypnagogic hallucinations and sleep paralysis.

Soon thereafter, I visited a narcolepsy specialist and in September of 2007, at the age of 24, I was officially diagnosed with "narcolepsy with cataplexy," a neurological sleep disorder affecting one in 2,000 Americans and 3 million people worldwide, according to the Narcolepsy Network.

Adjusting to narcolepsy in law school wasn't easy. The treatments improved my symptoms but did not erase them. The medications' side effects left me nauseated and sick in other ways. A few months after the diagnosis, I reached an all-time low, realizing narcolepsy was a serious illness I would face every day of my life. There was no cure.

A half year later, I sat in the silent law school library reading a New York Times article about a researcher named Dr. Emmanuel Mignot, Director of Stanford University's Center for Narcolepsy. Dr. Mignot was unraveling the mysteries of narcolepsy and the possible autoimmune pathology.

The article described: "Dr. Mignot is optimistic about cracking the immune-system connection in narcolepsy soon. 'I don't care actually even if it's going to take a long time,' he said. 'I'm ready to cross deserts.'"

In the article, another doctor states that Dr. Mignot was ideally suited for this work, describing, "This is what is good about Mignot. He is relentless."

Goosebumps raised on my arms as I read this description of Dr. Mignot, a relentless researcher crossing deserts for narcolepsy. That day in the library, I vowed to do my part to help Dr. Mignot build a brighter future for narcolepsy. Although not a scientist, I was determined to make a contribution.

After graduating from law school, I moved to Washington, D.C. to write a memoir and advocate for narcolepsy research on Capitol Hill. I also ran the Boston Marathon in 2010 to raise funds for Dr. Mignot's research.

A few years later, while visiting San Francisco, I made the journey to Palo Alto to finally meet the man behind the magic, the Wizard of Narcolepsy.

Arriving at the Center for Narcolepsy's lab, I gave blood for research purposes and met various researchers exploring the mysteries of sleep and narcolepsy. The scientists patiently translated their work to me. Although some terms went over my head, coming together was joyful, a celebration of our mutual passion for the future of sleep and narcolepsy research.

Last but not least, I had the honor of meeting Dr. Mignot in person. He enthusiastically described his research priorities for the coming years.

"I have some crazy ideas too," he said with a smile and sparkle in his eye.

I couldn't help but chuckle. Dr. Mignot having "some crazy ideas" was great news.

As a person with narcolepsy, I face adversity daily. On hard days, I take solace in knowing that the Wizard of Narcolepsy and his fellow researchers at Stanford are working tirelessly and making progress. Their science is our hope.

Julie Flygare, JD is a leading narcolepsy spokesperson and author of Wide Awake and Dreaming: A Memoir of Narcolepsy. She writes the popular REM Runner blog, organizes the National Sleep Walk, and serves on NIH's Sleep Disorder Research Advisory Board. She is also a patient of the Stanford Center for Sleep Sciences and Medicine. This Center is the birthplace of sleep medicine and includes research, clinical, and educational programs that have advanced the field and improved patient care for decades. To learn more, visit us at: http://sleep.stanford.edu/.

For more from the Stanford Center for Sleep Sciences and Medicine, click here.

The Center is the birthplace of sleep medicine and includes research, clinical, and educational programs that have advanced the field and improved patient care for decades.