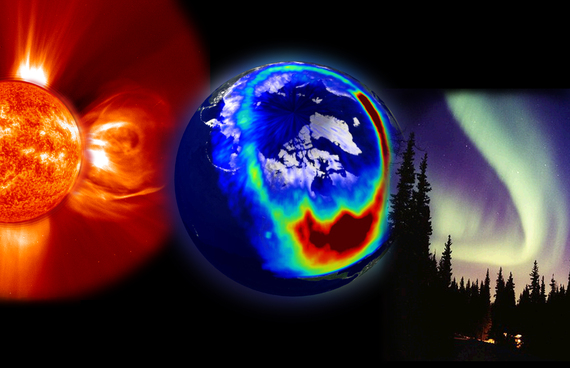 A solar storm, aurora from space, and aurora on Earth. Image credit NASA.

Space weather? Is that a real thing? As someone recently asked me, isn't it pretty much always cold up there?

In a sense that's true: the temperature in near-Earth space is actually thousands of degrees, but in the shade you'd freeze pretty fast. However, weather in space is not so much about extremes of temperature. Think instead of storms of magnetized plasma (ultra-hot protons and electrons) erupting from the Sun on a daily or near daily basis.

Up until a century or so ago, these Coronal Mass Ejections (CMEs) only affected humans on Earth in the form of auroral light shows. Technology has made us vulnerable, so that now space weather is something to be reckoned with. The question of how to do so -- planet-wide -- is the topic of a recently published international report, "Understanding Space Weather to Shield Society".

Just as a hurricane drives rain, wind, and floods, the space weather arising from a solar eruption can come in different forms. First comes the light from a solar flare, disrupting high-frequency radio communications at the Earth more or less immediately (eight minutes after leaving the Sun). Next comes particle radiation from the flare and CME-associated blast waves, creating hazards for astronaut health, satellite function, and aircraft electronic systems. Finally, the CME itself arrives -- the magnetized plasma that blows out from the Sun and takes 1-3 days to travel to the Earth. Interactions of the CME with the Earth's magnetic fields creates colorful aurorae at high latitudes. More ominously, it can drive disturbances in the Earth's upper ionized atmosphere (the ionosphere) that interfere with global navigation and communication systems, and can endanger electrical power grids through geomagnetically-induced currents (GICs). According to the report, the combined impacts of even "ordinary" space weather storms cost the global economy tens of billions of dollars each year.

Then there are the superstorms. On September 1, 1859, a solar storm occurred so strong that aurorae were visible as far south as Cuba and Hawaii, and associated ground currents sparked fires in telegraph offices. A recent study set the odds of such an event occurring in the next 10 years at 12 percent -- essentially, a "hundred-year flood".

What would such a superstorm be like for us now? Not so much the apocalyptic wasteland popular in science fiction books and movies, but still with plenty of potential for societal upset. If hundreds of high-voltage transformers were destroyed by GICs during a superstorm, as projected by one study quoted in a National Academies report, we could face extended blackouts and chronic power shortages for multiple years. The effects could be catastrophic, impacting millions of people.

The good news? The most extreme scenarios assume that we do nothing to prevent disaster. Some of the potential dangers, like those arising from an initial loss of communications, are remedied simply by having timely observations (e.g., "that was a solar flare, not a missile strike"). Other problems can be engineered around -- if we know the range and extremes of space weather (a.k.a. space climatology), we can design satellite and electrical systems to withstand the worst. Given adequate warning, the remaining hazards may be dealt with by changing operations mode -- for example, by changing airplane flight paths or by operating a power grid in "safe" mode.

The problem is that current warnings often give false positives. This is because although we literally see the storm coming, we are not yet able to accurately predict how bad it will be, or in some cases, if it will even hit the Earth. And acting upon all the false positives can be prohibitively expensive.

So what should we do as a society? According to the roadmap report, we should invest in research and observations that consider the Sun-to-Earth system as more than a sum of its parts. If we are to improve our ability to predict how bad the space weather will be, we have to understand not only the physical processes at the heart of the original CME, but also how it propagates through space and interacts with the Earth's space environment. We must support an optimized suite of telescopes and instruments that observe from Sun to Earth, and develop innovative approaches for incorporating these observations into models. We need reliable specification of space climatology (how bad can it get?), and a clear idea of associated societal vulnerabilities. And importantly, we need international cooperation and coordination, with global standards for and open access to our data and models.

What should you do as an individual? No need to panic: as long as you stay within the Earth's atmosphere and magnetic field you are well-shielded from space weather. However, you are affected by the choices made on a national and international level about how to prevent and mitigate damage to the technology you depend on (to read this blog, for example). Therefore, the advice I give you is not to go out and invest in a pair of lead-lined underpants, but to stay informed about space weather and support sensible science policy.

Sarah Gibson is a scientist at the National Center for Atmospheric Research (NCAR) which is sponsored by the National Science Foundation.