My last interview featured Phil Southerland, founder of Team Type 1 and the youngest person ever to get Type 1 diabetes and still be living. Now meet the indomitable woman who raised him, Joanna Southerland.

This is the 11th in my series of profiles on diabetes change leaders -- and the first with one's mother. 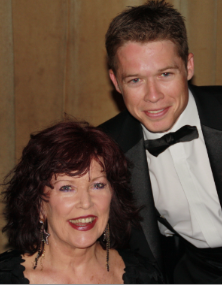 Q: What are your most vivid memories of 28 years ago, when your seven month old infant was diagnosed with Type 1 diabetes?

Joanna Southerland: I was taking Phil to doctors all week long because he'd lost weight and his diapers were always soaked. All I heard was, "He's teething, there's nothing wrong with him." Finally, I took him to a doctor on a Saturday because he was barely breathing. The doctor said, "Oh, he's just got the flu," but I knew better.

He'd lost eight pounds in three days. Phil has incredibly blue eyes, and he began climbing up the side of my back in his little yellow jumpsuit, and his eyes were grey. I said to the doctor, "I don't care what you say, I'm taking him to the emergency room right now!"

As soon as we got there a nurse picked him up and remarked that his breath was fruity. But the doctors didn't listen, and because Phil was only 14 pounds and barely hanging in my arms, they put him on a glucose IV. The IV was heading him right into ketoacidosis. He could have died.

Finally they took Phil off the IV and the doctor said, "I have good news and bad news. Your son is going to live, but your life's going to change. He has Type 1 diabetes, and you're going to have to give him insulin."

Q: One of the biggest fears with Type 1 diabetes is low blood sugar. How did you deal with that with an infant?

JS: After Phil was stabilized, he was put in the pediatric intensive care. One day he turned green in my arms and a nurse, whose brother has Type 1, got in my face (in a good way) and said, "Welcome to the life of a diabetic. This is hypoglycemia and you're going to have to get used to it!"

I was on guard every moment from then on. When Phil was low as an infant, I would give him orange juice and tell him what I was doing. I'd say, "I'm giving you orange juice because your blood sugar's low." Once when he was 13 months, I was sitting in a chair and he came up to me and said, "Orange juice, orange juice, low."

Things always seemed to happen that gave me a sign to fight on. At one point I went to a diabetes support group looking for information, and the woman who ran it was a 'poor pitiful me' kind of person. She made out like she couldn't do anything because of her diabetes. I also met another girl there who'd had Type 1 for five years and was going blind. I was out of my mind for about two months after that.

Then one day, in a supermarket I don't usually go to, I ended up on the check out line behind this girl and her mother. I felt like the power of god had directed me there. In their cart was all this junk food. I decided then and there that my son would not eat like that, and these womens' fate would not be his.

Q: Given that you had an infant with a disease that needed intense management, and your husband had a drinking problem, how did you manage?

JS: I always looked at it like it could be worse. Phil could have gotten a disease that might have killed him. Granted it wasn't much fun when I had to wring out his diapers and stick a urine test stick in the liquid to see what his blood sugar was. But I made a choice that I was going to fight this and do whatever I had to do.

My ex-husband smoked and drank and the marriage had been bad for years, so with Phil's diagnosis I made the decision that he had to go. I wasn't going to have that stress and those influences in my house.

I remember sitting in my closet about two months after Phil's diagnosis. I was very overweight because I got heavy during pregnancy and hadn't lost the weight. I was sad about my weight, and sad my son had diabetes, and I was sitting in my closet stuffing potato chips in my mouth for solace. I had my hand half way up to my mouth and I thought, "You've gotta stop this right this minute because Phil can't eat like this!" That day I stopped. I started exercising every day and I haven't stopped since. I thought, if my kids are going to eat right and exercise, I have to too. Shortly after I changed to eating an almost vegetarian diet.

JS: I saw early on that Phil needed to move all the time and that exercise was beneficial for him, so I kept him involved in any activity I could from an early age. People say that took a lot of courage. What it took was a lot of testing his blood sugar. He grew up knowing that you can do anything, but you've got to keep your blood sugar in control.

Of course, for about two years after he was diagnosed, I took him everywhere for someone to tell me his diabetes was a mistake. One day one doctor said to me, "You've got to treat this, the shots, the testing, like brushing his teeth." So I began treating everything like brushing your teeth, exercise, eating, insulin, it was just what we did every day.

Q: Do you feel you lost anything because of Phil's diabetes?

JS: No. I certainly wish my son never had a disease, but he has impacted so many lives. When he was small I would run to the mailbox to get Diabetes Forecast magazine and see who had Type 1 diabetes and what could I learn. There were very few stories. Then almost 27 years later to the day of his diagnosis, Phil was on the cover of Diabetes Forecast. I can be a hard-ass, but I shut my office door and sat down and cried.

When you first get the diagnosis, you're mad as hell and keep asking why? Why not me? Why my child? Why god? Anybody who has anything happen like this asks that. But 27 years later, he was doing something for people that I desperately needed as a young mother. That day I was overwhelmed with incredible sadness, but also incredible pride. In his entire growing up, he never felt sorry for himself, not one single day.

Q: What advice would you give parents who have children with diabetes?

JS: I think the most important thing is that you can't feel sorry for yourself; and don't let your kids know you feel sorry for them. If you need to cry, you need to cry alone or with your friends. I had a wonderful group of friends and wasn't afraid to explain the disease to them or ask for help. When my friends saw I was on the breaking point, they were right there for me. Type 1 diabetes is 24/7. It isn't a disease you can manage alone. Get connected to others online if there's no one in your circle. I'm always connecting diabetes families that I meet online.

Q: Were there lessons for you in Phil having diabetes?

JS: Yes. If you think you're right about something, trust yourself. If I had believed the doctors who told me Phil just had the flu, I would have kept him home and he would have died. I had this internal feeling that there was something wrong and I trusted enough in myself to believe I was right.

And never give up hope. Be relentless in trying to do the best you can in a bad situation. Martial all your internal resources. This has taught me that out of the worst possible circumstances can come the best. You can't let bad things get you down because you don't know what the outcome's going to be. If anyone had told me 28 years ago when Phil was diagnosed that this would be the outcome, I would have thought they were nuts.

I look back at my life and can say Phil's been a role model for me. He has found his purpose in life: To avail himself and all his team members to let the world know that Type 1 isn't a death sentence. Maybe mine was to keep him alive.

Riva is the author of "50 Diabetes Myths That Can Ruin Your Life and the 50 Diabetes Truths That Can Save It" and "The ABC's Of Loving Yourself With Diabetes." Visit her web site Diabetes Stories.com.