Liz Markus' current solo exhibition, "11" at ILLE Arts, continues the artist's painterly exploration of American culture with a witty and playful look at heavy metal. The exhibition title refers to This Is Spinal Tap (1984), the classic movie spoof of the rock music world, and captures the fun, rebellious spirit of Markus' paintings in this exhibition. In the movie, the band Spinal Tap's funny and defiant refusal to accept the conventional, maximum volume of 10 on its amplifiers means the band's amps are made to go up to "11."

Markus has always made paintings about her personal experiences of America and its cultural history, using the classic American style of 1960s stain painting on unprimed canvas. In the past, her paintings have loosely depicted imprecise, abstracted-looking images from the hippie counterculture of the 1970s, popular music (punk and new wave) of the 1980s and, most recently, romanticized American landscapes. In this exhibition, Markus continues to paint images on unprimed canvas that appear as if they are viewed through the hazy veil of memory, as she harkens back to her days of being a teenager in Buffalo, N.Y. and the heavy metal pop culture of that era in America.

It makes sense that the images in "11" grew out of Liz Markus' recent three-week visit to her childhood home, necessitated by the sudden illness and passing of her father, Dr. Gabor Markus. With a solo exhibition scheduled in just over a month, Liz had spent two weeks of eight-hour days in the hospital with her mother, brother and sister. There was nothing anyone could do, but her family members would not allow her father or another family member visiting him in the hospital to be there alone. She spent hours doodling in her sketchbook and remembered when she had last been in Buffalo for weeks at a time -- when she had been a teenager, hanging out in the summers with her brother, listening to music and not doing much of anything. Probably out of stress and/or anxiety, she began writing her father's name "Gabor" over and over in her sketchbook, and as she did so, her doodles began to "channel" the attitude of the listless suburban metal-head teenager, even though she herself had been a private school honors student. And suddenly, "Gabor" in her sketchbook began to look like the logo of a heavy metal band.

When Markus arrived in East Hampton, N.Y. to begin work on the paintings for this show, she created a character named Gabor, the lead singer of an Eastern European heavy metal band (and who looks to me like an aging rock star who has lived "the life"). This character Gabor likes American sports cars such as the Ford GT and resembles Willem de Kooning. In a way, these characterizations doubtlessly stem from the fact Markus has always wanted to paint classic American sports cars and she likes referencing or painting American cultural icons in her work, as she has in the past with Andy Warhol, Jean-Michel Basquiat and Nancy Reagan. In addition, her Hungarian-born father Gabor really had resembled de Kooning. While working on the show, Markus saw spider crabs on the beaches and wild turkeys running around East Hampton, so she decided that Gabor's logo would be the spider crab and that he liked drinking Wild Turkey bourbon. In this way, Markus essentially imagined and created an iconic rock music celebrity to be the main character for this new group of paintings while responding to and coping with immediate personal experiences: being in the hospital for weeks with her family in Buffalo and then being in East Hampton to prepare for her then-upcoming exhibition.

Just a few weeks earlier in the hospital with her father's passing a known eventuality, Markus had told him that he would be with her while she made paintings for this show. His nodding in understanding and agreement convinces her that his spirit is infused throughout these works. In addition to being an internationally-renowned cancer research scientist, Dr. Markus had escaped Nazi persecution after receiving his medical degree in Hungary and was known for his love of music and a tremendous sense of humor and vitality. Made during a period of what probably was deep, heavy grieving, Liz Markus has made a group of paintings that are some of her most lighthearted, funny and rebellious. The spirit of her father's love of humor runs throughout the show and there is a sense of freedom and liberation associated with celebrating the joys of life and not accepting its limitations.

PHOTO GALLERY
From
Download
Calling all HuffPost superfans!
Sign up for membership to become a founding member and help shape HuffPost's next chapter
Join HuffPost 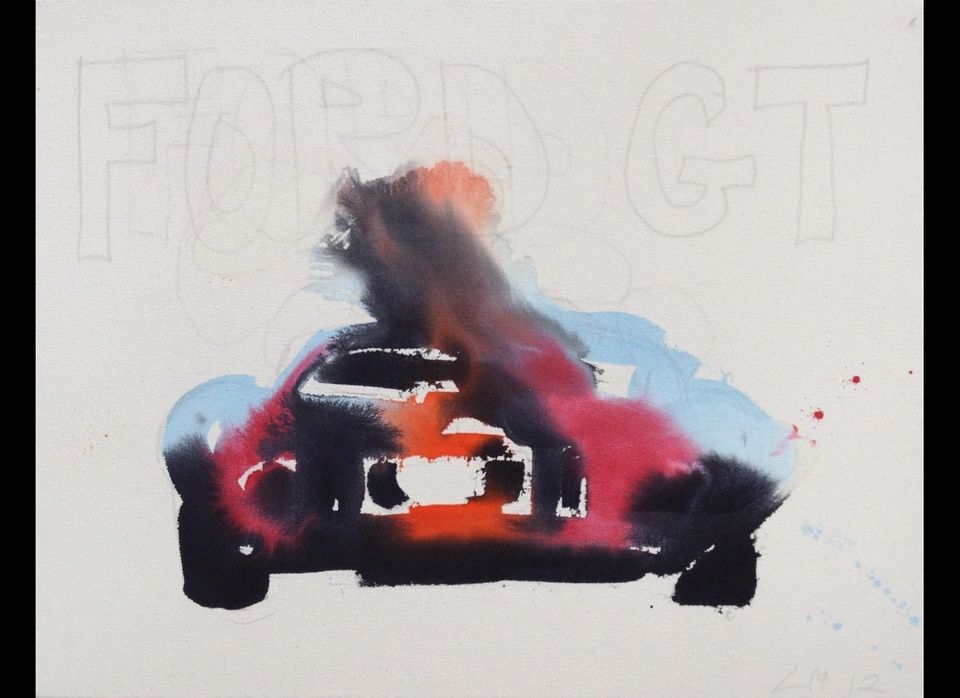