"Whenever I was depressed, I always felt like I had two separate lives," photographer Liz Obert explained to The Huffington Post. "One that people saw everyday and the one that could barely get out of bed in the morning. For years I struggled with how to make this into art."

Through "Dualities," Obert seems to have found an answer to her problem. The photographic series showcases two types of portraits. One shows her subjects as they'd prefer to be seen, gleefully dressed in formal wear or leisurely playing a guitar. The second shows the individuals as they appear in a state of depression, holed up in an apartment or hidden behind a pair of deafening speakers. Beneath each image is a handwritten caption detailing the experiences of each state of mind. "The result is two images of each person, one up and one down," Obert proclaims. 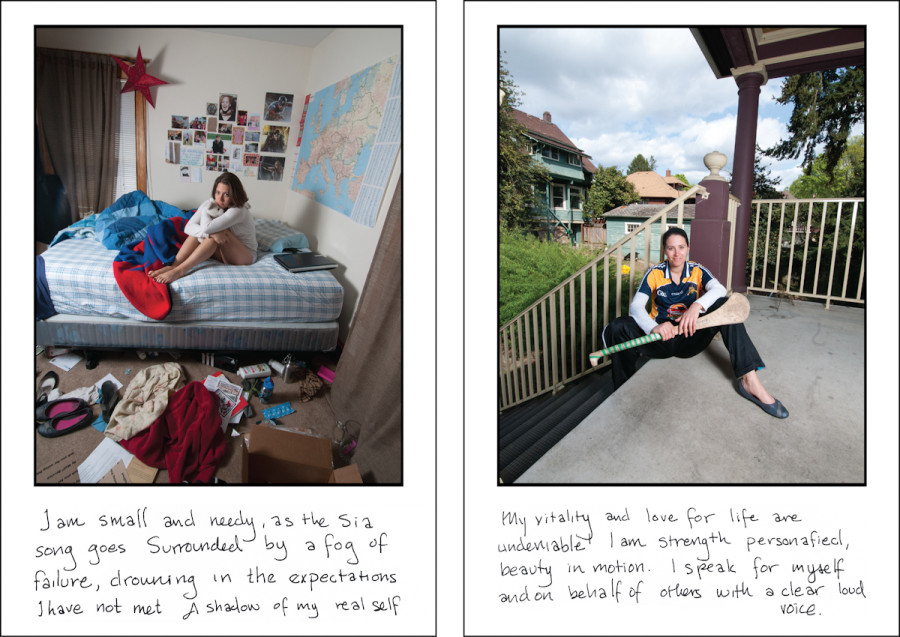 Obert, who's began diagnosed with bipolar II disorder, began the diptych project with a self-portrait. In a state of vulnerability, she was forced to confront her disorder in a way that she'd never experienced. "Becoming a subject, I had to announce to the world that I suffer from bipolar II," she added. "The writing section, conversely, was very cathartic. It was a way for me to parse out my actions in my different states of mind."

So she moved on to including others in her work. Most of her subjects are friends and friends of friends. And because she's part of an artistic community, she knew people living with bipolar disorder and depression who were willing to open up about it. She'd meet with them over drinks or coffee to speak about their experiences before discussing the setting of her shoots. "I give the subject control over the setting," she said. "They decide where they want to be photographed and what they will be doing."

The resulting photos aim, according to Obert, to reduce the stigma associated with facets of mental illness. The aspects of public and private life that permeate each portrait, and the idea of living a double life, are familiar to us all. "I believe it is important to put a human face to disorders that affect millions of people."

According to the National Institute of Health, there are an estimated 43.7 million adults aged 18 or older who have been diagnosed with mental illness in the United States. That's 18.6 percent of all U.S. adults. Obert points out that 5.7 million American adults have been diagnosed with bipolar disorder and approximately 14.8 million are afflicted with depression. Despite the numbers, she feels these disorders are largely misunderstood.

"Through this series and the conversations that I hope it inspires, people without these disorders can connect with the people who have them."