When a lizard loses its tail, it grows back. But how?

Scientists have taken a big step closer to answering that question by pinpointing the genes responsible for tail regeneration. And the finding may yield important clues about how to regenerate limbs in humans.

For the study, the researchers took a close look at roughly 23,000 genes found in samples of sliced-up tails of green anole lizards. They found that at least 326 genes in specific spots along each tail were "turned on" during regeneration -- suggesting that lizard DNA has a genetic "recipe" for regeneration.

"We were completely surprised," study co-author Dr. Kenro Kusumi, a professor of life sciences at Arizona State University, told The Huffington Post in an email. "We were expecting all of the regeneration to be focused at the tip of the growing tail. Instead, the cells are dividing in distinct pockets including muscle, cartilage, spinal cord, and skin all throughout the tail."

And from there, the cells would grow into new tissue to form a new tail. 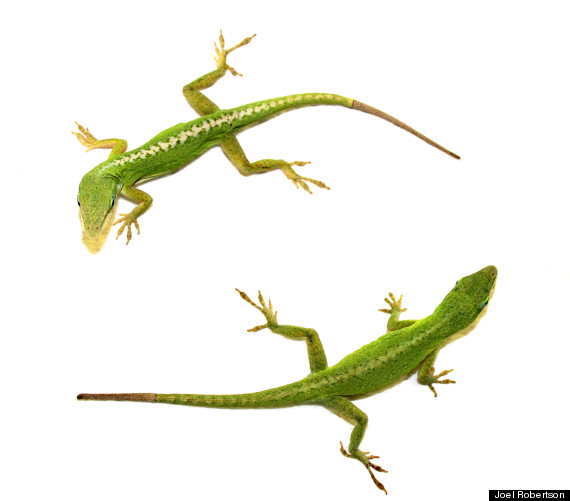 The regenerated lizard tails. The green anole lizard (Anolis carolinensis), when caught by a predator, can lose its tail and then grow it back. Researchers have discovered the genetic 'recipe' that explains how this happens.

"Regeneration is not an instant process," study co-author Elizabeth Hutchins, a graduate student at the university, said in a written statement. "It takes lizards more than 60 days to regenerate a functional tail."

What about human limb regeneration? The researchers said their finding may help pave the way for new therapeutic approaches for birth defects and spinal cord injuries -- and possibly arthritis too. Nearly all of the 326 genes pinpointed by the researchers are present in humans as well as lizards, Kusumi said.

"As anyone who suffers from arthritis knows, an important part of the limb are joints, which are cushioned by a specific type of cartilage," Kusumi said in the email. "Lizards grow lots of this cartilage in their regenerated tails, and we hope that this process can be activated to repair arthritis in humans."

The new study was published online in the journal PLOS ONE on August 20, 2014.