NEW YORK -- Prosecutors charged two men in the death of a 4-year-old boy killed by a stray bullet during a wild gun battle in a Bronx park on Sunday night.

Rondell Pinkerton, 17, was arraigned Wednesday on charges of second-degree murder and attempted murder after he told cops he was one of several men involved in the shootout, which erupted during an evening basketball tournament outside a public housing project in Morrisania. Lloyd Morgan was shot in the head in a nearby playground while playing with other children and died soon afterward.

In his first appearance in Bronx Criminal Court, a stone-faced Pinkerton bowed his head as prosecutor Leah Takantzas read a transcript of a videotaped statement he made to police on Tuesday.

"As I entered the park, I was handed a .45-caliber gun," Pinkerton told police, according to Takantzas. "Courtney and Stormy started shooting at me. I returned fire with the .45-caliber I had."

Pinkerton, who goes by the name "Spyder," according to charging documents, believes he opened fire in self-defense, said his public defender, David Narain.

"He is remorseful for what took place or what happened as a result of the altercation," Narain said after the hearing.

Courtney Kelly, 26, was shot in the abdomen during the gun battle and was charged with criminal possession of a weapon on Tuesday, a felony. He remains hospitalized.

The gunfight shattered what began as a pleasant and peaceful Sunday evening in the Bronx, witnesses said.

"There was people sitting on the grass -- it was so beautiful," said one woman, who heard the shooting from her fifth-story apartment across the street, and declined to give her name. "I hear the bullets -- like boom -- and all of these people were screaming and trying to run," the woman said.

On Monday night, family members of the slain boy gathered with neighbors and city and community leaders to mourn his death and call for action to stem the bloodshed. Shootings have increased more than 12 percent from last year citywide, police statistics show, and a single week in early July saw 77 people shot and 18 killed, a spike of nearly 30 percent from the same week in 2011.

Kneeling on the same spot where her child fell dead, Shianne Norman lit a candle, choking back hysterical sobs as the neighbors surrounding her shook their heads in anger and wiped back tears.

"Can somebody tell me something that makes this make sense?" Norman said softly, tears streaming down her face. "You got to think. Think of all the people you're affecting."

Assemblyman Eric Stevenson, who represents the area, said Sunday's shootout was in retaliation for a shooting at another housing project, McKinley Houses, across the street from Forest Houses, the night before.

"They thought the Forest guys did it so they come over and retaliate," Stevenson said.

Just three weeks ago, Isaiah Rivera, a Brooklyn 3-year-old, narrowly avoided a similar fate, after a running gun battle sent 13 bullets flying into a playground on a sunny Sunday afternoon. Rivera was hit by a bullet fragment in the leg as he played in a sprinkler.

In a speech at the Bronx rally on Monday night, City Council Speaker Christine Quinn, a front-runner in the race to succeed Mayor Mike Bloomberg, said the violence needs to stop.

"What I hope is we don't have to see each other again under these circumstances," Quinn said. "There have been enough shootings already, enough children lost." 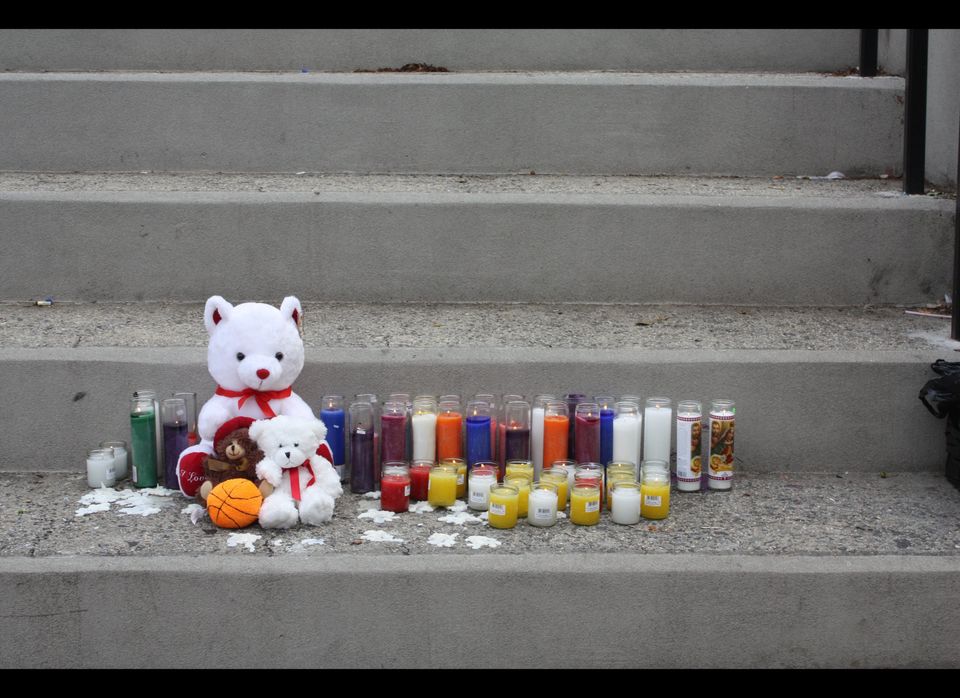 1 / 5
A vigil on the basketball court for four-year-old Lloyd Morgan, who was killed by a stray bullet after shots were fired on during a ball game there. Lloyd's mother Shianne Norman called her son "Little Lebron" because of his love of basketball.
Anna Sanders