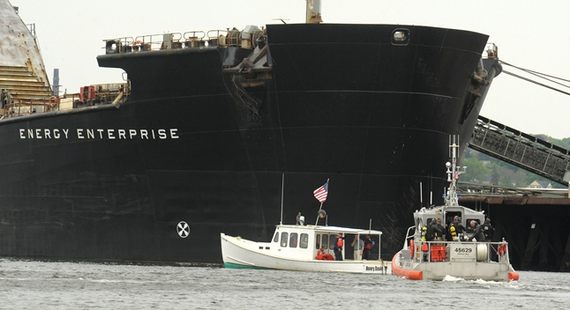 When I met my husband Geof Day, his work as a climate activist introduced me to some interesting people involved with 350.org. Recently, I heard the inspiring story of Ken Ward and Jay O'Hara, two climate activists who, up until September 8th, thought they would be doing prison time for their bold action of blockading the largest coal-fired power plant on the East Coast with an old lobster boat. Last week, Sam Sutter, a local District Attorney, agreed that because the actions of Ward and O'Hara at Brayton Point were reasonably reflective of a broader danger (that of climate change), all charges, beyond paying some minor damages, should be dropped. Later, in a stunning move, that same DA--while waving a copy of Rolling Stone featuring an article by 350.org founder Bill McKibben--stated that climate change is "one of the greatest crises our planet has ever faced," that political leadership on this matter has been "sorely lacking," and that he would be joining them at the upcoming People's Climate March.

This is an interesting and important story, especially on the eve of world leaders' convergence at what is being billed as "the largest climate march in history" - the People's Climate March - in New York City on Sept 21, 2014.

Here's an interview with Jay O'Hara and Ken Ward, with thanks to Geof for connecting me to them so that they could tell their own story.

When the Bristol County District Attorney appeared in court the day your trial was scheduled to begin and dramatically dropped criminal charges against you, were you surprised?

KEN WARD: We were not surprised that the charges were reduced, as the prosecutor had tried the week before to have the case knocked out by the court, and we knew from private conversations that morning that the DA agreed with us on climate and would make a statement, which was pretty exciting, but we were frankly blown away when DA Sutter issued his indictment of the failure of current political leadership and said, in effect, that civil disobedience is an appropriate response under these circumstances.

JAY O'HARA: I was looking at Tim DeChristopher, who spent nearly two years in federal prison for disrupting a federal drilling lease auction and who's been helping us in our trial, and Tim's jaw just dropped as DA Sutter read his statement. Yes, we were all surprised and thrilled.

Why were you thrilled?

JAY O'HARA: You have to picture what was happening. We had a hundred people who had come to Fall River expecting to spend two or three days watching and supporting us and I think everyone had pretty mixed feelings when we trooped out of the courthouse--happy that Ken and I weren't going to get prison time, but disappointed, I think, that we weren't going to be able to use the trial to draw attention to the climate crisis.

KEN WARD: We had Bill McKibben and Jim Hansen and other experts ready to testify and a team of topnotch lawyers led by Matt Pawa and Joan Fund - working at no charge - set to present a first-ever climate necessity defense. Then, just an hour after court convened, the criminal charges were dropped, which meant that we would not be able to offer the necessity defense. DA Sutter's statement was thrilling because having the prosecution agree with the reasoning behind our action achieved much of what we sought by going to trial, just in an unexpected way.

Jay, you have spoken before about being open to the "unexpected" and I know that this is part of your Quaker religious tradition, can you speak more about that?

JAY O'HARA: Yes, the lobster boat blockade I did with Ken was part of what I consider my Friends ministry - an expression of faith in action. By taking the first step of putting oneself in a position to observe injury as it is being done - and I consider burning coal, given everything we know, to be among the most terrible actions possible - we do what is called "bearing witness" in the Friends tradition. And this is important even if there is no reason to believe that anything positive will come out of it, or even that anyone will know you were there. Ken and I were prepared to do what we did even if there had been no news about it. When we do that, miraculous, unexpected things happen, such as we saw at the trial.

KEN WARD: I'm a UCC Congregationalist, and come at this maybe a bit more hardheaded in terms of cause and effect, but over two years of difficulties and barriers we've seen many, many doors open where we did not expect them. The lobster boat action achieved what we wanted, but not always by the means we anticipated. Jay talks about a "way opening" which I sometimes joke about (hey, my phone's about to die and we've got that call with the New York Times reporter; don't worry, a way will be opened), but that has, in fact been our experience all along.

Tell me about some of those barriers.

KEN WARD: Well, I remember getting a call from Jay a couple days before the action was planned. The boatyard where our lobster boat, the Henry David T., was stored over the winter had just put the boat in the water and Jay thought it was sinking.

JAY O'HARA: There were three inches of water shooting up into the air all along several seams.

What did you do?

JAY O'HARA: We bought a pump and kept the water below the level of the engine until the wood swelled up.

What other kinds of difficulties did you face?

KEN WARD: Probably the most difficult obstacle was opposition from Massachusetts environmental groups. When we began to explore the idea, this was in the fall of 2012, we had a round of meetings with organizations in the "Coal Free Massachusetts" coalition--leaders in the effort to close Brayton Point and other Mass coal plants. We hadn't expected that they'd necessarily embrace us, but we also didn't expect the kind of, ah, vigorous opposition we got.

JAY O'HARA: At one point we were told that if we went forward, "somehow" word would get to Brayton Point security and the Somerset Police.

Wow, that is hard to believe. Why were they so opposed?

KEN WARD: I was somewhat sympathetic, having been in a similar position in the past. When I was Director of New Jersey Public Interest Research Group, which had a large toxics program, a Greenpeace team went out and welded a piece of steel over the largest pollution discharge pipe going in the ocean (led by Jon Hinck, who's now an environmental lawyer in Maine). I was annoyed, it's was a turf thing, but then we saw that everything changed. Almost overnight there was a whole new willingness to do something about toxics and groups like ours had much more room to maneuver and get things done.

JAY O'HARA: Before our action, no one was seriously discussing immediate shutdown of Brayton Point. Our action led to two major demonstrations at the plant site and a definite shift in attitude toward the plant. All the groups who opposed our action have, more or less, come around, and some are even enthusiastic.

KEN WARD: Of course, green groups are still a very long away from where we need them to be.

KEN WARD: Exactly. We just saw perhaps the weakest display this summer. In May, we had the Rignot study saying that the West Antarctic ice shelf is now in "unstoppable" collapse, which means 10' of sea level rise, and just a month later President Obama issued his coal plant emissions regulations which are absolutely terrible - pro-natural gas and fracking, pro-nuclear power, and, I would argue, pro-coal, because they aim to keep 30% of electricity generation from coal burning - and every single one of the major US environmental groups endorsed this miserable proposal, most of them without even a peep of complaint.

JAY O'HARA: One of our objectives is to demonstrate an absolutely honest approach that doesn't flinch at putting climate science truth first. We can't shade reality in order to pander to moderate public opinion. We believe the honest approach will work to transform politics, and we think we've proven that here.

Where do you go from here?

JAY O'HARA: Well my partner Meg and I are sailing down Island Sound at the moment, sharing our experience at forums and Friends Meetings along the way, heading for New York where we will be participating in a flotilla as part of the Sept. 21 People's Climate March just before the UN climate meetings.

KEN WARD: I'm working with Tim DeCristopher, our lawyers and other members of our support committee to finalize plans for a Climate Disobedience Center, which we plan to open just after the September march. We want to provide support, training and other resources to folks thinking about or planning civil disobedience on climate along the lines of our lobster boat blockade.

As a result of this small action, history has been made. A small precedent has been set. Civil disobedience against coal-fired energy in this case was judged both symbolically and in reality for the greater good of the environment, and to the benefit of the public.

Perhaps a new way of understanding climate change has indeed opened, as manifested by the journey of the Henry David T. and the no-longer-sorely-lacking leadership of one principled and courageous public official.

Lori Day is a consultant and writer with Lori Day Consulting in Newburyport, MA, covering politics, current events, culture, media and women's rights in the Huffington Post. You can connect with Lori on Facebook, Twitter, or Pinterest.