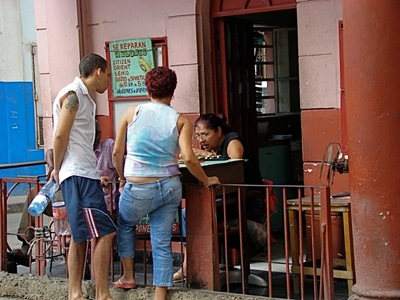 A Watch Repairer: Typical of the Few Kinds of Self-Employment Allowed in Cuba

In his private restaurant, Humberto serves more than a dozen dishes on the sly. Few know that on those tables with their shining white tablecloths patrons are offered lobster, shrimp and beef. These three products are of greatest interest to the police; under Cuban law their possession, without the proper papers, can lead to long prison terms. Thus, the menu does not reflect such controversial recipes, but if some guest with a trustworthy face asks, he may hear about the forbidden delicacies waiting in the kitchen, out of sight of the inspectors.

When self-employment was authorized in 1994, the country filled with places where you could eat a beef steak or a Neapolitan pizza. The strict straitjacket that had stifled creativity from the so-called Revolutionary Offensive at the end of the seventies, started to loosen up. Caught between surprise and laughter, we Havanans saw how our city filled with timbiriches -- tiny little businesses -- and houses converted into restaurants, which the popular fantasy dubbed Paladares, or "palates." The euphoria, however, was short-lived, as between the high taxes, the restrictions on hiring any employees outside the family, and the long list of forbidden products, many of the sites eventually closed.

A few days ago Raul Castro announced in Parliament that a new impetus is going to be given to the self-employed. Humberto breathed a sigh of relief because in recent months he had been thinking of surrendering his license and trading in his frying pan for an illegal taxi. Now the president's words have given him hope that he won't have to marry his daughter off to the cook, so the latter can work in the family business. Who knows if the new liberalizations will also allow them to offer the banned products that are hidden in their kitchen.

Paladares Self Employment In Cuba Cuba
This Blogger's Books and Other Items from...