Across the country, farmers markets with local purveyors plying dirt-dusted produce and artisanal cheeses are a routine and revered part of life during the spring-to-fall growing season. Their regulars advocate eating food produced closer to home, as it tends to be fresher, healthier, tastier and easier on the environment than the shipped equivalents. And buying this way also makes consumers feel good about supporting producers they know, who in turn invest in the local economy.

Not surprisingly, the number of farmers markets rose from 1,755 in 1994 to 8,144 last year, or more than 350 percent, according to the U.S. Department of Agriculture (USDA). And the trend has gone viral, as consumers are voting 'local' with their dollars and having a profound influence on the nation's food systems. Their enthusiasm has led suppliers, grocers and restaurants to change and adapt by adding locally produced goods to their offerings year-round.

Yet as the local foods movement grows, is it really better for us--and the environment? 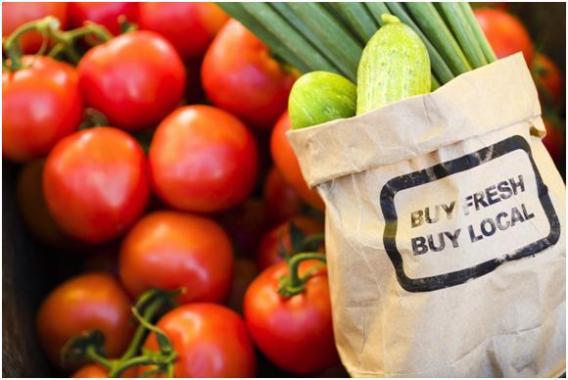 A lot of U.S. consumers think so: 52 percent said buying locally grown produce is more important than buying organics in a 2012 study by Mintel. They're also willing to pay more for locally grown and produced foods, notes research in Ecological Economics, reported in Food Navigator.

So retailers are giving consumers what they want. Now placards that once listed produce by price-per-pound boast detailed descriptions of when, where and how the item was grown. Even Wal-Mart, which had food sales of $150 billion last fiscal year and is the nation's largest fresh produce retailer, according to CNBC, is also going local. In spring 2013, the retailer committed to double its local produce stock by December 2015.

Restaurants are also subject to the trend. The National Restaurant Association found the lust for local foods dominated its 2014 "Top Food Trends" survey as "locally sourced meats and seafood" and "locally sourced produce" earned the top two spots on the list. "'Hyper-local' food," including herbs and vegetables garden-grown by restaurants onsite and "farm/estate-branded foods" came in at Nos. 6 and 10 respectively, while "environmental sustainability" and "sustainable seafood" ranked third and eighth respectively, which fits the trend since food production methodology is part and parcel of the local foods movement. And national chain restaurants, such as Chipotle and Subway, are committing to buying local.

No wonder agri-lending giant Rabobank called the local foods movement a "permanent and mainstream trend" earlier this year, noting that it is "changing the competitive landscape" of the produce industry for the better. There is evidence that buying local can mean healthier and tastier produce since most conventional varieties are chosen for their high yield and durability, which a Harvard Medical School analysis says "come at a cost: nutritional quality." The Harvard study cites an Organic Center report, "Still No Free Lunch: Nutrient Levels in U.S. Food Supply Eroded by Pursuit of High Yields," which notes "farmers producing for a local and direct market...are more likely to prioritize taste and nutritional quality over durability when making varietal decisions."

But whether eating locally is always the better choice for the environment is debatable on some counts.

First, final transportation to market is only 4 percent of food production's overall environmental impact, according to "Food Miles and the Relative Climate Impacts of Food Choices in the United States," a landmark study by two Carnegie Mellon University scientists. They conclude that upstream environmental costs are much higher (83 percent of carbon emissions can be attributed to the production phase), so it's better to grow food where production needs fewer inputs-such as growing tomatoes in a warm, sunny climate further away rather than nearby in a heated, lighted greenhouse.

Also, large farms growing crops sustainably, and suited to their region, are better for the environment because they use less energy per item and grow more food on less land, notes University of Toronto professor Pierre Desrochers, co-author with policy analyst Hiroko Shimizu of "The Locavore's Dilemma: In Praise of the 10,000-Mile Diet," in USA Today. This also offers consumers the economic benefit of lower prices, he adds.

Feasibility is another point to consider. Sub-optimal conditions, such as soil quality, water availability and climate, can make some locales impractical to farm. "That's why Iowa is so good at growing corn and Montana [stinks] at it," says David Swenson, a regional economics researcher at Iowa State University, in USA Today. So it is more economical to grow large quantities of food where the climate is best.

And to be frank, it's not always possible for local foods to be available everywhere year-round. For instance, eating strictly local and fresh would spell a monotonous and nutrient-deficient diet for much of the northern U.S. and Canada for at least half the year.

For these reasons, and given the fact that the local foods movement offers consumers so many benefits, sustainably processed and packaged food has an important role to play in supporting the admirable goals of local food advocates and supplementing their needs. So retailers and producers can learn from the local foods movement and leverage it--especially since sustainable farming practices, available technologies and contemporary packaging make it possible for processed and packaged foods to deliver on quality, maintain ingredient integrity, preserve food nutrients and accomplish social, environmental and economic good as well.

On its website, Michigan-based, nationally distributed Eden Foods touts the network it has built of over 360 family farms to source its raw materials, which are mostly grown close to home base. They also note that they pay farms directly to get them more cash.

Truitt Brothers, an Oregon-based bean farmer and processor, also understands the tenets of the local foods movement, describing its philosophy as "food manufacturing with a conscience." The website describes its five bean varieties as "sustainably cultivated on family farms in the Pacific Northwest" ... in "earth-friendly Tetra Pak cartons." Consumers far from the Pacific Northwest can appreciate the sustainable nature of the farms and the care with which the beans are processed and packaged, in close proximity to where they were grown-a clever twist on 'local.'

And Oregon-based manufacturer and processor Pacific Foods, founded in 1987 to create healthy, self-stable food and beverage products using ingredients grown with integrity, started its own organic farms when the founders realized there weren't enough local organic producers growing the ingredients the company needed for its products. To date, they've converted 3,200 acres of conventional farmland to organic and own three organic dairies with more than 1,400 cows. And by demonstrating sustainable farming techniques, they've helped other Oregon farmers follow suit, allowing them to develop a local food web.

So clearly, by leveraging these technologies and packaging food in sustainable packaging when and where crops are grown, producers can help reduce environmental impacts, lock in fresh flavor and nutrients, extend products' availability to consumers year-round and still support local growers. But for the advantages of the local foods movement to develop, mature and benefit all, everyone involved in the food system--from farmers and producers to retailers and consumers--must carefully and consistently work toward what's best for the food system they want to improve and sustain.